Are the illustrations part of Shel Silverstein's poems?

Shel Silverstein's poems are illustrated by himself. The illustrations often provide the 'punchline' of the poem, as in the following examples (all taken from Falling Up.

This poem is accompanied by this illustration: 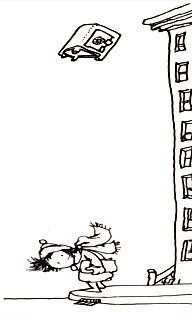 This is a safe falling out of the sky onto the girl's head.

This is accompanied by this charming animal: 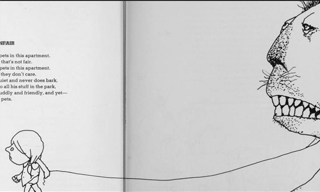 Us swans and geese
Have rotten luck.
You folks don't know
Whose name is whose.
I waddle in -
You all yell "Duck."
Can't you see
That I'm a goose?

With this pointed picture: 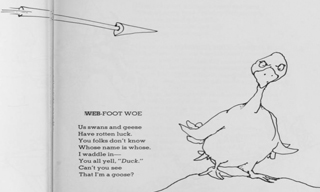 You're only imagining
A mouse is in your hair.
You've got to stop imagining
That mice are everywhere.
I think you're just imagining
To give yourself a scare,
But trust me dear, I wouldn't lie:
There is no mouse up there.

With this slightly surprising picture:

I've made the point; there are more examples. So can these illustrations be considered part of the poem itself, as they are necessary to understand the poem?

I'm going to say that with some of them, yes.

There are some of Silverstein's poems where the illustration is humorous but not required, such as "My Beard" (from Where the Sidewalk Ends):

My beard grows down to my toes,
I never wears no clothes,
I wraps my hair
Around my bare,
And down the road I goes.

While the picture of a little man wrapped in his beard running down the street is funny, you don't need it to understand the text. But in the examples you've cited, without the image, you literally can't understand the punchline (the safe falling, the elephant in the girl's hair).

So yes, for some of them (obviously you'd have to go through his work and read them to figure out which), the illustration is part and parcel of the text, and cannot be separated.

I discovered this post from the bygone ages of the Stack Exchange abyss, and I thought I could contribute an answer to it, so excuse my tardiness.

I most certainly agree that Shel Silverstein intended his poetry to be read devoutly with his delightfully morbid illustrations. And on the point of your question, here is some evidence of a poem (albeit shorter than usual) which entirely fails to succeed without the illustration:

"Draw a crazy picture, / Write a nutty poem, / Sing a mumble-gumble song, / Whistle through your comb. / Do a loony-goony dance / 'Cross the kitchen floor, / Put something silly in the world, / That ain't been there before." -Silverstein

Not the answer you're looking for? Browse other questions tagged poetry shel-silverstein or ask your own question.

4
How is the connection between the picture on page 59 and the last line of "Allison Beals and Her 25 Eels" shown in other publications of the poem?

5
First book of Edward de Vere's poems?
4
Have Kenneth Muir's poems ever been published as a collection?
5
What are the originals of the poems Tagore has translated from English into Bengali?
14
What meter are "I lik the bred" poems in?