I recall a short story I read in High School. We read it in English class so it was likely published in an anthology intended for use in schools. (This was in Scotland in the 1970's if that helps.)

The story begins, I think, with a robot being programmed to collect, from a certain planet, an example of every type of fauna which falls within a certain weight range. (The planet does not have a 'human-niche' type civilization, just wildlife, as it were.)

After the robot is programmed and set to work some disaster or other befalls the spaceship carrying the entities who programmed the robot and no-one ever goes back for it. It just stays there, collecting....

Skip forward many years and the main human character enters the story. I can't recall how or why he is on the planet, but he is. He can't contact his mothership and somehow we know some of his vital stats, including his weight. He is in the collectable range......

He discovers this 'storage area' of fauna samples all standing in suspended animation and the robot appears and tries to 'collect' him too.

Our hero flees the scene and outwits and dodges the robot for an extended period, we are in great suspense because we know he is within the specified range for collection.

Eventually the relentless pursuit over many hours, possibly days, wears him down, the way a human can run down an antelope, and the robot catches him. It picks him up with its robotty appendages, turns him round a bit then puts him back down and placidly trundles away.

How has he escaped? He was in target range for collection! Readers are wracked with consternation.

Our hero finally manages to make contact with his mothership and tells them all about it, when they ask if he is okay he says something like, 'yeah, but I must have lost at least five pounds...' putting him just outside the target range for the trundling collector.

I've searched for this on and off over the years with no success. Would love to know what else, if anything, the author had published.

The Ruum by Arthur Porges published 1953

A shape-shifting, indestructible robot—a "Type H-9 Ruum"—is accidentally left behind on earth during the age of the dinosaurs by visiting aliens, and not recovered because their ship is destroyed in a battle. The Ruum's work is collecting different species of animals within a 30-mile radius, weighing 160 pounds (give or take 15 pounds) and preserving them in a state of suspended animation for later retrieval.

Many millions of years later Jim Irwin, a uranium prospector in the Canadian Rocky Mountains, encounters the Ruum's specimens, animals which include modern and prehistoric mammals and a small Stegosaurus. After he has noticed that the animals are all of a uniform size, and alive, the still-functioning Ruum appears. Shooting it with a rifle does not damage it, and when the approaching blob-shaped Ruum reveals gripping hooks and a probe dripping green liquid, Irwin runs as it pursues him at a steady five miles per hour. It is noted that Irwin weighs 149 pounds.

Fit and military-trained, Irwin attempts to evade and destroy the Ruum. First he hides above his trail and drops a boulder on it, but this also fails to damage it. Then he climbs a sheer cliff, but the Ruum extrudes a climbing claw to the ledge where he is hidden. He tries to dislodge it with a stick, and finds the Ruum can generate an electric shock. He shoots it and dislodges it, but the Ruum is unharmed by the fall and responds by growing multiple claws. Having not had any time for food or sleep, Irwin eventually circles back to his camp by a lake and sets a trap with dynamite. Taking advantage of the Ruum's distraction by a grizzly bear, which it kills, he detonates the dynamite using a pistol bullet.

Dazed by the explosion, he sees the Ruum still unharmed and still approaching. Exhausted and defenseless, he awaits it adding him to its collection. However, it lifts him up, then puts him back down and leaves. Soon afterward, his colleague Walt Leonard arrives by seaplane and rescues him. Safely in the plane, they make plans to bring a helicopter and collect some of the Ruum's specimens in its absence to sell to scientists. Leonard comments on Irwin's haggard appearance, guessing him to have lost 10 pounds during the chase: the reader understands that this caused his weight to become less than the Ruum's weight criterion.

While there are a few differences it generally matches the storyline given, and was the first hit on google. 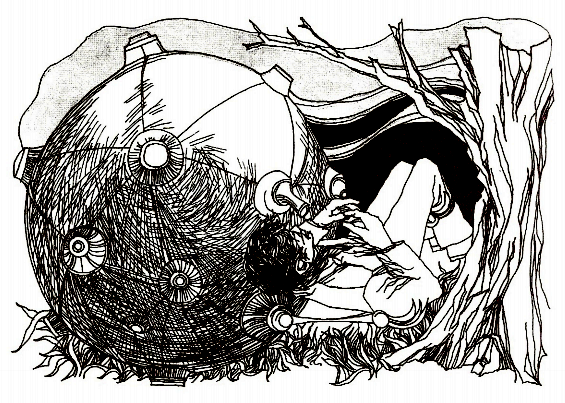 Also thanks to user14111 for commenting a link to an ISFDB page with a list of publications this story appeared in.

Not the answer you're looking for? Browse other questions tagged identification-request short-stories or ask your own question.

12
Looking for an old O. Henry story about a wealthy young man trying to woo a "genteel poor" young lady in New York City
2
Short sci-fi story called "Blood and Lust"
5
Book about a prisoner who was forced to take a medication while strapped down, which granted him enhanced vision
2
What is the Title of this fable where a Mongoose is getting married
7
Short story in which notorious safe-cracker retires but has to use old tools to save girl's life
9
Searching for a sci-fi short story: three robots sent as ambassadors to prevent an interplanetary war
10
Sci-fi short story about not getting into cars with strangers