Everyone keeps diaries due to regular, town-wide amnesia

I would have read this English YA novel in the late 2010s, though I'm not sure how old it was at that point. It was picked up from a local library in the Western United States. I am 50% sure there was at least one sequel. It's also likely that either it or its sequel had a glowing tree on the cover. Both titles were short.

This is what I most vividly remember.

I have no idea when, chronologically within the book, I would have picked up this setting information. From what I recall, it was sprinkled around throughout, with certain pieces being used as reveals. Some of this may be from the sequel. I recall so little plot from the sequel, though, that it can safely be assumed the majority is from the book in question.

Earth sent off a colony/science ship to explore a planet considered habitable. When they landed, these carefully-selected folks started science-ing around. Then the first town-wide (possibly planet-wide, but the book doesn't stray too far from town) amnesia event hit and they (or at least a decent number of them) forgot what they were doing. Alone on an alien planet, this group sets up a society that can withstand everyone in it forgetting themselves on a regular basis.

So, the amnesia. It hits every X years, at a predictable time. All conscious memory is lost: your name, your relationships, where you live, stuff you memorized for a job, etc.. I'm pretty sure that unconscious "muscle memory" or the like remains.

Every person in town is required/strongly encouraged to keep a diary of everything they do. Once a diary fills up, it is checked in to the library and a new one taken out. On the day when the amnesia hits, everyone holds on to their latest diary and goes to their home. That way, when they come to they'll know who their family is and where they live. They can then figure out who they are by reading the diary they kept with them. The rest of their life can be pieced together from the diaries saved in the library.

The public is assured that the diaries are sacrosanct, and that by having their diaries saved in the library they will live on forever in memory.

The day(s) before the amnesia hits, people do things they wouldn't do normally (like the Purge). Teens go out and do stupid stuff together, people run away with lovers - because if it isn't written in their diaries, then no one will know the next day. I think I also recall something about a man writing himself out of his family's life because he wanted to take up with another woman.

Other life events get planned around the amnesia as well. There's a note about how it's bad to start an apprenticeship too close to getting amnesia, because there won't be enough time for what you learn to move into unconscious memory. Thus you'd have to start all over again. Age is at least partially tracked by the number of amnesia events you've had.

There is a certain (flower?) plant thing that was connected to the amnesia - either it was the cause or a cure. I'm leaning towards "cure", but am not sure.

The local wildlife is called by names reminiscent of Earth life. The specific example I can think of is a small bug which had a name similar to "grasshopper".

And now we get into territory that I'm less sure about. I also remember only the barest sketches of plot.

The main character (hereafter called MC) is I think female, and has an older sister/mother (or other family member, hereafter called FM) who disappears at some point. During one amnesia event, MC manages to remember some stuff. Which is deeply weird, since that's supposedly impossible.

MC starts investigating the matter. One thing she does is go to the library and try to read her FM's diaries. There are some complications (maybe she's blocked from doing this?) and she goes to the library several times. Her actions alert a high-up government person (hereafter GP) who I think is also female. (I only started doubting the genders here when I realized how many important female characters I remember).

GP did something nefarious to FM's diaries. Maybe some pages were removed, or the diary was read without permission. Regardless, these activities present some sort of problem to MC's investigation.

Things escalate. No, I do not remember how or why they escalate. Sorry. MC's research into a cure/preventative progresses, and this is for some reason seen as dangerous by GP. MC goes out of town exploring and finds the Helpful Bunker of Exposition (that's what I called it in my head), which exposits the world's backstory and has some information about Earth. MC realizes something about GP from the Helpful Bunker and hurries back to town.

Later, a lot of townsfolk are hiding in a basement. (Maybe MC rushed them there?) They have some supplies, from... the Helpful Bunker? Secret stocks below the library? Anyways, they're worrying about not having enough supplies to outlast... something. I think the "something" was airborne and going to invade the aboveground areas. Maybe the "something" was GP artificially causing an amnesia event?

There's an encounter between GP and MC. I distinctly remember an injection needle being involved somehow. The whole thing ends happily. I think they can now control/prevent the amnesia events.

I'd really love to find this book again. The setting was marvelous, and I am interested in what actually happened, plot-wise, within the world that I remember so acutely. So: what book is this?

The Forgetting by Sharon Cameron 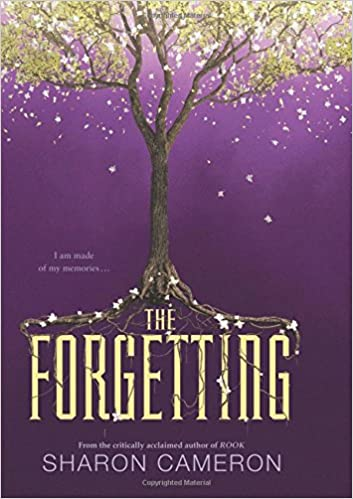 The title is about the expected length and the glowing tree is indeed on the cover of this book. There was actually a series, not just a single other sequel.

The following are from the book. Typos are probably my fault. When I didn’t quote to back something up, it’s because the information was scattered about and it would make the answer too long to track it all down.

About the regular amnesia events and the function of diaries:

At the first sunrising of the twelfth year, they will forget. They will lose their memories…

More about the Forgetting, from Nadia's memories (which also is indirectly showing that she has memories):

They all know it's coming, you see, like knowing you're about to die. And they know that whatever they do will be forgotten, even by themselves. There are no consequences. No guilt. And so they give in. Take what they want, do what's never been allowed, get their revenge. I think some of them try on wrong like they would try on a new shirt, just to see if it fits. To see what it feels like on their skin.
Page 96, Chapter 6

A plant turns out to be both the cause and the cure; the forgetting tree's spores causes Forgetting and another plant can be made into a cure which reverses it.

Janis doesn’t mess with Nadia’s family’s books, but she does have other people’s books removed (so that they will lose their memories upon Forgetting), has Nadia’s home searched, and attempts to use Gray (the love interest) to get information from Nadia. Specifically, she’s interested in the code to the Helpful Bunker, which is on a bracelet that Nadia comes into possession of once she acquires an previously-unknown childhood diary. The encounter near the end that I remembered was probably when Janis captures Nadia and Gray, and injects both with Forgetting.

Here’s some exposition about the world/Janis from that Helpful Bunker of Exposition’s computers:

There were two main goals: create the perfect society and figure out the world (e.g. study the comet)/find a useful resource.

The information says Janis Atan was not born on Earth, but on the Centauri, the flying machine they called a “ship,” carrying the chosen members of Canaan…
“Explain to me,” Gray says, “how Janis still has her name?”…
“Everything you said in Rose’s room, about who must have written the First Book of the Forgetting, who could have figured it all out so quickly, who would have talked that way. You were right to try and steal the First Book, because Janis wrote it. She came to that pool today [outside the entrance to the bunker] because she knows that door is there. And she knows that door is there for the same reason she still knows her name.”
“It’s because Janis is like you. Because Janis never forgot.”
Pages 221-222, Chapter 13

Nadia’s oldest sister, Anna, was murdered by Janis. This was both to eliminate a threat (Anna was naturally resistant to Forgetting) and also to run an experiment which helped Janis figure out the formula for a Forgetting cure. The loss of a daughter, one which Nadia’s mom can only remember in fragments, broke her mother’s psyche, leading to self-harm and anxiety behaviors.

Everyone hiding at the end:

“When you take Mother to the Archives,” I tell Liliya, “shut all the doors. Seal it off. And once the Forgetting starts, you cannot open the doors, do you understand? For three full days.”
Page 341, Chapter 20

The book ends with a new ruling Council elected - elected! - and everyone provided access to the cure if they wish

Here are a few quotes to confirm the more random bits of memory I had:

I did not actually identify this book; that was someone else. But it doesn't look like they'll update/undelete their answer so I'm posting a self-answer

10
Book about a boy who develops several accidentally destructive science projects
4
YA book involving disappearing subatomic particles?
6
Story about siblings crossing the United States on foot
6
Identify a fiction novel about Atlantis and digital or analog "discs"
2
Crime drama/mystery where a woman suffers a car crash, and searches for a child who doesn't exist
5
Children's book set mostly in Skegness with witches