Which book has a main character named William in a church in a forest?

There is this one book I've been looking for:

The book is relatively small, but pretty thick. The cover features a young boy running upwards, with a tiny doglike creature in the bottom lefthand corner. It's all black and white, and I believe it is textured. There are leafless trees that sharply contrast with the background, with creepy-looking birds hunched over that have eyes made of shiny red material.

The main character is a young boy named William whose family was killed in a fire, and who was then "adopted" by a church. I don't think they call it a church, but a synonym I cannot remember. This church is in the middle of a forest, and much of the story happens in winter. From what I can remember, William finds a creature (pretty sure it is a species he calls "fob") that hurt its leg in a metal trap. He is alone in the woods and is about to turn back — please remember that this is a magical setting and "fobs" are universally distrusted by humans — when he finds that the creature can speak. Out of pity, he frees the animal, but it doesn't run away. Instead, it follows him home to the church. Apparently it can talk to the church pig (I think her name is Maggie). There isn't much significance in this, but after its leg heals it often sleeps in the pigsty, and gets quite a bit of gossip from her. Some more stuff that we know about the fob is that he won't tell his real name, because it holds a lot of power against himself, and his name is Brother Matthew or something. Only a guy called Brother Martin knows about the "fob", because William begged him to nurse him back to health. This creature is pretty loyal to William and protects him in some ways. I think that he, as a magical creature, is allergic to rowan and metal.

One night, a super rich and important guy called Jacob comes on a horse, accompanied by a fay(e) [sorry, not sure if it has an e]. This fay(e) is a magical creature bound to his master, Jacob, like a guard. I forget his name, but it may or may not have started with H. He doesn't need to eat or sleep and all of his wounds heal almost instantly. So apparently Jacob is very interested in William, but William is afraid of him. Soon the church people (all of them male monks) find out that Jacob has leprosy, which explains his mask, long sleeves, and horrid breath. I'm not sure if there's anything between this and the next events, but William finds out that Jacob traded his health for immortality, and is eternally ill. However, he can't stand to suffer more, so he came to the church to beg release from an angel, and in return he promises that the church will inherit his vast fortune (pretty sure he's rich). So, for some reason he chooses William to come with him to the creepiest part of the forest, which is rumored to hold the remains of the fallen angel. The fay(e) guy tells him where to dig, and he actually finds the corpse of a tall, slim angel with an arrow in his chest. (the story is that a group of men or faye, I'm not sure, shot and killed him, and he was buried here where no one would find out). Somehow the angel wakes up, Jacob takes off his mask and sleeves, begs, and is killed mercifully by the angel. I don't remember if the angel flew away or just died again, but now the fay(e) is bound to William because he is the only one who saw Master Jacobs die. So, the fay(e) must protect William with his life, and can't leave without dying.

So this is really long, but in the next few chapters I remember that there is this evil old lady that has a white crow and weird soup. I think she hates the Abbott of William's church, who dies, also at the mercy of an angel (he was sick too). There's also a faceoff between the fay(e) king, his army, and the fay(e) bound to William, who has betrayed his race to protect Master Jacobs. I don't remember finishing the story, and would definitely love to. I've searched everywhere for it and I don't think it's too well known, so thank you to anyone who can help!

The Crowfield Curse by Pat Walsh, published in 2010. 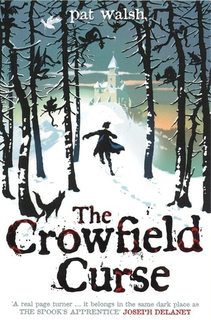 Will knows a secret.
Somewhere in the forest, behind the abbey where he lives, is a grave. And beneath the snow lies something he thought could never die. But Will is not alone in knowing the truth about the Crowfield Curse. Hidden in the dusk, someone else is watching...

One, Jacobus Bone, is a leper who was once a fine musician. His servant, Shadlok, is a sinister creature, with long silver hair and a criss-cross map of old scars on his face. They are seeking something and Will thinks it has to do with an old legend that an angel was once killed near the abbey; a feather from the angel's wing is preserved as a holy relic there.

Found via a Google search for fantasy orphan boy Fey leprosy (searching for William, Jacob, and leprosy brings up a lot of results for a Dr. William Jacob who apparently specializes in leprosy treatment).