Identify a book about a boy who has hypnotic powers

I remember this book fairly well. I'll try to provide what I remember about all points.

The cover was predominantly blue, with spirals across the whole thing. I think it had a person on it.

It was written by one of the authors of the original the-39-clues series, so either

It was two words, one of which might have been 'A' or 'The'.

There was a boy, who has discovered that he has hypnotic powers. He hypnotizes a hypnotist, which leads to him being accepted into an institute for researching hypnotism. I think the name of the institute started with a 'S'?

One day he's walking, and meets a guy who's also a hypnotizer (they called it bending I think). He's in charge of an organization of benders, who have all committed crimes with their powers, who are meeting in a restaurant or something. This guy tells him not to trust the guy who's in charge of the institute.

The main character (it's possible his name started with either Q, W, V, X, or J) goes back to the institute, where the guy in charge records him hypnotizing to vote for someone in an election, and then creates a virus that will go through the computers and hypnotize people. Our main character calls up the guy who he met and tells him that the bad guy rigged the election.

The guy comes to his house and discovers that main character's parents have been hypnotized to commit suicide if the main character tries to stop the bad guy, and they have to stop them from doing that.

So then the guy who he met (tree something?) gets his band of benders and goes to stop the rigging. The main character hypnotizes the guy who the bad guy has under control to drop out of the race. (I think that the guy who was going to be elected had the name of one of the main characters of the-shadow-children, but I'm not sure.)

In revenge, the bad guy hypnotizes the main character to jump off a roof or something, and they have to stop him. 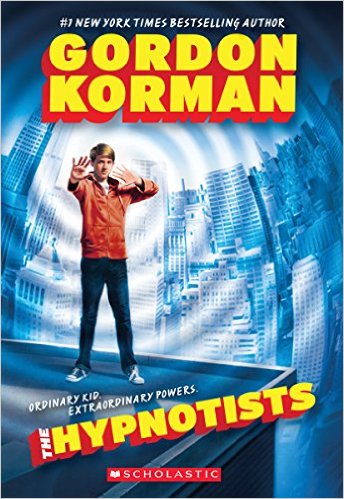 This matches your description of the cover. Here's the book jacket description, emphasis mine:

Is it a gift... or is it a curse? Jax Opus can use his color-changing eyes to make people do things they don't want to do. (Only his color-blind best friend, Tommy, seems immune.) At first, Jax doesn't know what he's doing -- temporarily hypnotizing friends, foes, and strangers. But then his power pushes things way too far, and his secret isn't a secret any longer.

Soon Jax finds himself meeting Dr. Elias Mako, who wants him to join a special institution that will teach him how to use his powers. But what will his powers be used for? That's the big question for Jax as his hypnotic abilities draw him into a conspiracy that will have him racing against time and a mysterious mastermind to save his best friend, his parents, and the entire United States.

This seems like a pretty close match to what you remember. Plus, the main character's name does indeed start with a J.

Also, the character who Jax meets and tells him that Elias isn't good is named Axel Braintree, and he runs the Sandman's Guild, who meets in a Laundromat.

Elias Mako tried to get Senator Douglas Trey to be the president, but Jax hypnotized him into dropping out. Trey is indeed the name of a character in the-shadow-children.

11
Which book has a main character named William in a church in a forest?
8
Book about a boy blinded by a firecracker
8
Identify a book about boys living in the woods for a summer
13
Identify a Children's Book about a character who eats all his groceries on the way home
4
Novel about a woman who becomes a prostitute to pay for her husband's sins
4
Please identify this sci-fi series where the main character has mental access to the aliens' computers
6
Book about a 10/11 year old boy with autism or something similar
1
Novel with a spy/assassin who helps the grand-daughter of a Nazi hunter, speaks Basque from learning it from a book, escapes a cave through water