There's a book I read a while ago, and I forgot what its title was. In the book, there's this really smart science kid who goes on a trip to the Amazon to help in some sort of study tour. I don't remember the ending but he uses curare darts to take people out. I think it was evil industrialists and they were cutting down the forest and he was going to stop them 'cause it was displacing a group native to the land and so he starts using guerrila warfare type stuff to attack them. He’s a kid from middle school who is crazy smart but gets bullied and would purposely fail tests

Assuming aherocalledFrog is correct in the added detail of hair remover spitballs, you're thinking of Rob Thomas's Green Thumb. 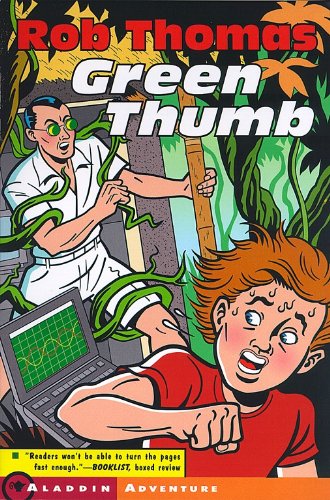 Winner of two National Science Fairs for his work on plant life, thirteen-year-old Grady Jacobs isn't exactly Mr. Popularity. But he doesn't care. He's spending the summer with the famous botanist Dr. Phillip Carter in the Amazon jungle trying to save the rain forest with a new species of super trees. Although his duties are mostly relegated to kitchen patrol, Grady stumbles on a startling discovery: a binary system of sounds that enables him to control the movement of trees.

With his keen eye for popular culture now trained on the environment, award-winning author Rob Thomas tells a coming-of-age story bursting with action and adventure. Hanh on to that vine: It's going to be a wild ride.

This review mentions the spitballs:

I'm a big fan of Rob Thomas and this book did not disappoint. I'm also really glad it's directed at the younger reader since junior high kids have probably missed his other titles. (Rats Saw God, Slave Day, Satellite Down) The main character, Grady, is instantly likable while we witness him outwitting his football-star bullies by covertly pelting them with spitballs covered in hair remover. These bullies have beat him up for the last time, however, when he travels to the Amazon rain forest as part of a tree-growing research team. He loses his extra weight & puts on muscle. Not to mention saving the jungle from a mad scientist. It's a fun story that teens will love, with a main character that some may identify with. Keep 'em coming, Rob!!

Looking at Google Books, curare is mentioned a handful of times, primarily in that the protagonist is semi-immune due to previous exposure.

Found with a search for novel amazon spitballs "hair remover", also the accepted answer to Book about a boy that controls plants by whistling? on the SF&F SE.

16
Science fiction short story with the ability to jump from world to world
10
Book about a boy who develops several accidentally destructive science projects
4
Book about a runaway kid who lives in a hollow tree
3
Trying to remember a book about a kid with powers
4
Middle-grade or YA book with a very smart teenager
9
Everyone keeps diaries due to regular, town-wide amnesia