I'm looking for an English poem, in fact I think it was at least two poems, that consisted of capital A's, representing the Ford Model A, moving as if in traffic, and another that had both A's and T's. The first, with only A's, was two vertical columns with only a few A's, representing the beginning of the automobile age when only a few model A's could be found on very simple roads. The second was a more complicated "road" (not just a vertical column) filled congestedly with both A's and T's.

Even though, if I'm recalling correctly, this has no words per se, it was in a collection of poetry I once encountered. I had thought it was by cummings or Sandberg, but I've been unable to confirm.

the composition depicts the letters T and A, badges of the early model cars created by Ford, travelling various four-lane highways. In frame 1, the model Ts, introduced in 1908, carelessly ride the yet unmarked roads of turn-of-the-century America, roaring through the twenties. In frame 2, a far fewer number of model As, originated in 1928, come to a halt, forced to obey, one can infer, the newly instituted system of traffic lights. The funereal orderliness with which they ride points to the reduced production and sobering economic reality of the times. In the third frame, a profusion of smaller, necessarily more maneuverable Ts and As, as automobile offspring, cruise superhighways and execute cloverleaf turns, manifesting the automania that came on the prosperity and technological prowess of post-war America. Thus the geometric artistry of the poem includes an intricate correspondence between images and American eras.

The poem appears on page 804 of The Treasury of American Poetry (1978), edited by Nancy Sullivan. Here’s the first of its three parts: 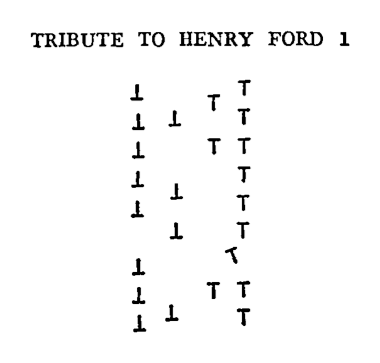 Not the answer you're looking for? Browse other questions tagged poetry identification-request or ask your own question.

7
Poem about a young man who dies
2
Poem that ends with “…whispers, snow!”
7
Poem about bedtime story for witch's child
4
Calvert curricular poem
1
Author and title of poem: “Follow, follow me into the South, …”
1
Starting a poem with a “small letter”
3
Seeking Title and Poet of Post WWI poem closing with “If there is no reward for devotion such as this, I'll take my chances in hell”
1
Poem about a joker with disorganized attire