Anthology: one story about an astronaut falling on flowers, another about a wife trying to kill her husband

I am trying to remember the name of a book with short stories inside. I remember 2 stories from it:

Please help. I am already having restless nights because of this. Thank you!

Add on: it was an old book in English and I read it in 1999 or 2000. It was a compilation of short stories by different authors. The book cover as I can vaguely recall was a silhouette or outline of a man in a hat and glasses. I forget the color background.

The first story is "Nothing for My Noon Meal", a short story by Harlan Ellison, originally published in Nebula Science Fiction #30, May 1958 (U.S. edition dated September 1958), available at the Internet Archive.

There was an astronaut on a foreign planet with flowers all around called floofs or phoofs, I forgot.

When I first saw them, I was certain they were trumpet-flowers, for they had the characteristic bell-shaped perianth with delicate stamen projecting slightly from the cup. But as I drew nearer I realized nothing so Earth-like—even in outward appearance—could occur here. These were not flowers, and on the spot, in the muffled-breathing of my helmet, I called them Fluhs.

His helmet broke and he fell upon those flowers

I leaned over to stare deeper into the trumpet-blossoms, resting on one of the slanting pillars of pseudo-rock for support. That was one of my first mistakes, nearly fatal, and intended to color my entire life on Hell.

The pillar crashed—it was a semi-porous volcanic formation, almost scoria-like in composition—and loosened other rocks that rested on it. I fell forward, directly atop the Fluhs, and the last thing I felt was my oxygen helmet shattering about my head.

Then the blackness that was not as deep as space slid down over me.

and found out that he can actually breathe there.

My face was pressed into the Fluhs.

I was drawing oxygen from them.

I had stumbled and fallen and cracked open my helmet, and should have died, but because of strange plants that sucked the nitrogen from the thin atmosphere, circulated it and cast it back out as oxygen, I was still alive. I cursed the Fluhs for depriving me of quick, unknowing surcease. I had come so close to joining her, and had lost the chance.

Only his face was swollen.

As I lay there thinking, gathering strength for the run back to the ship, I felt my face draining. It was as though I had a great boil or pus-bag on my left cheek, and it was sucking blood down into it. I felt my cheek, and yes, even through the glove I could feel a swelling. I grew terrified then, and plucking a handful of Fluhs—close to the bottom of their stem—I thrust my face into them, and ran frantically back to the ship.

The second story is "Do-It-Yourself", a short story by Harlan Ellison and Joe L. Hensley, originally published in the February 1961 issue of Rogue. (This story was also the answer to an old question over at the Science Fiction & Fantasy Stack Exchange.)

A wife ordered a murder kit to kill her husband

"This Kit contains three sure, clean and undetectable, I repeat, undetectable, ways to commit murder. No two kits are the same, though repetition occasionally occurs when the subjects to be murdered have common character traits. Again, though, no two kits are the same. Each of the three modus operandi is designed for you according to the application blank you sent us when you contracted for this Kit. Now. To prepare yourself for your murder—"

She snapped the pamphlet shut with quick, suddenly-sweating hands.

Do I hate him that much?

Where had their marriage gone wrong . . . somewhere in the eleven years? Where? An infinite sadness stole over her as she remembered Carl the way he had been when they first met.

but failed each time

This time there was no mistaking the annoyance in the pamphlet's voice.

"You failed again. I can tell from your emanations. Very seldom does anyone need two of the methods provided by our Kits . . . you are the first one in nearly eight thousand Kits that has needed all three. We hope you are proud of yourself."

until she was caught by her husband's murder kit for her.

"So that's what's been goin' on, huh Madge? I shoulda guessed you'd get up the gut one day soon. I'll haveta think back an' see if I can figger out what this Kit included. It'll be fun. My three was real wowzers, y'know."

She stared at him, uncomprehending. Had he found her Kit, and had she not noticed?

"I rekcanize the pamphlet," he explained with a wave of his meaty hand. "I sent for one of them things over three months ago." His voice altered with incredible swiftness. Now casual and defacing, now harsh and bitter as sump water. "But how'n a hell could I of used it around someone like you . . . you'd of noticed the first lousy little trap that I'd'a set . . . you'd a vacuumed an' swept an' pried an' found it.

He smiled again . . . this time with dirty mirth. "Your goddam floor's gonna get filthy today, Madge." He drew out the long, shiny knife. "Had one of the guys in Steel Molding make this for me . . . a real do-it-yourself."

The Internet Speculative Fiction Database lists only one book containing both stories, the 1962 Harlan Ellison collection Ellison Wonderland, which has also been issued under the titles Earthman, Go Home! and (in German) Der silberne Korridor. You can see all the different covers for this collection here. Based on your description of the cover (man, hat, glasses) I believe you read the 1974 Signet / New American Library edition. 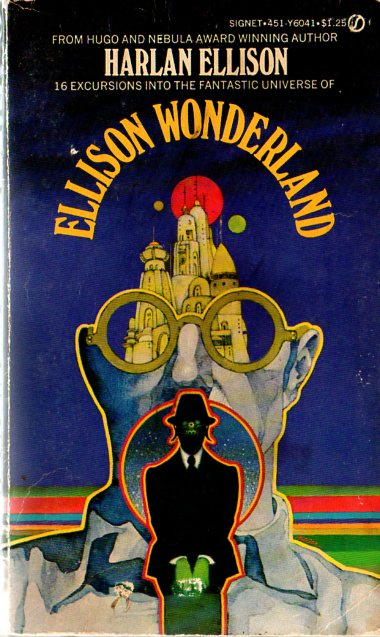 Not the answer you're looking for? Browse other questions tagged story-identification short-stories or ask your own question.

15
Science fiction short story with the ability to jump from world to world
10
Looking for an old O. Henry story about a wealthy young man trying to woo a “genteel poor” young lady in New York City
8
Looking for a short story about a small-town mob who goes after a man who had accidentally killed another man
8
A crime/detective story where the protagonist tells his murder story in great detail and still roams free
25
English short story where a wife makes an investigation officer eat the murder weapon
8
A short story on two brothers meeting one a criminal one policeman
2
Middle Grade book read in 2001
0
Trying to find: Short story: Boy meets a man who is about to hang himself