The plot of the first part of The Three Musketeers revolves around 12 diamond studs that Queen Anne d'Autriche gives to the Duke of Buckingham.

What exactly were those studs? I mean, what was this object of jewellery? How were they to be worn?

The French word that was translated to stud was ferret. I don't actually see any justification for translating ferret here as stud, as I will explain later.

To explain how the diamonds were worn first, these twelve diamond ferrets were part of a decoration meant to be worn on a shoulder. It was made of six blue ribbons woven or knotted together. The twelve ferrets were ornamental tips attached to the ends of the ribbons.

The rest of the answer contains the justification for this statement. To see what ferret means, let us look at the relevant definition from the Larousse dictionnaire de français. This is

So what is an aiguillette? The English translation is aiguillette, but this won't help modern readers because the word has largely fallen out of use in both English and French (because aiguillettes aren't used much anymore). Larousse says that an aiguillette is

So an aguillette was a short length of cord or braid, tipped at both ends, often with precious metal or gemstones, that was used to fasten clothing closed, or which was worn purely for decoration.

One can see pictures of them in English Wikipedia. This says

Portraits of the 16th and 17th centuries show that aiglets or metal tips could be functional or purely decorative, though many were used to "close" seams and slashes that are not always apparent on dark garments in portraits. They were made in matched sets, might be of silver, silver-gilt, or gold, and were worn in masses.

Here is a 1562 picture of Lord High Admiral Clinton wearing a doublet fastened by aiguillettes, from Wikipedia. 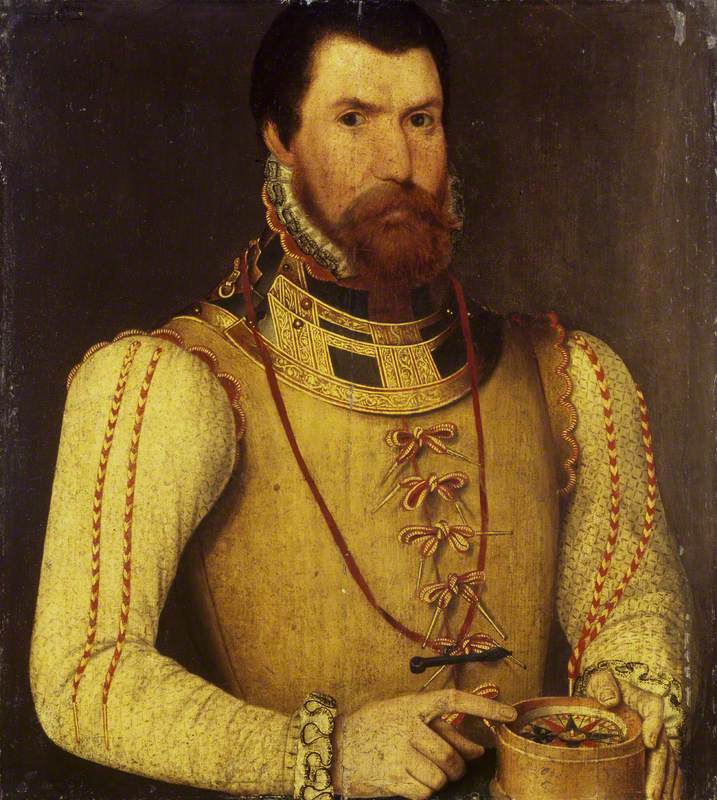 However, in this case, the ferrets were not on aiguillettes, although they were indeed on the ends of ribbons.

The first time we see the ferrets being worn is:

She [The Queen] wore a felt hat with blue feathers, a surcoat of gray-pearl velvet, fastened with diamond clasps, and a skirt of blue satin, embroidered with silver. On her left shoulder sparkled the diamond ferrets, on a knot of the same color as the plumes and the skirt.

A later description of the diamonds in Les Trois Mousquetaires follows:

Note that the French word noeud is broader than the English word knot; a bow would also be called a noeud.

So the ferrets are in a large decoration made of blue ribbon. We also find that this was meant to be worn on a shoulder. This decoration must then be made of six blue ribbons knotted or woven together somehow, and the diamonds are on pieces of jewelry which are affixed to the twelve ends of these six ribbons.

NOTE: the first passage I quote above from Les Trois Mousquetaires seems to have been changed between the serialization where it first appears, and the 1850 novel edition of Les Trois Mousquetaires published in Paris. The language in the novel seems compatible with the idea that the ferrets are on aguillettes. See the other answer.

In the original French version of the novel, what d'Artagnan has to recover from London are ferrets (engl. aglets). An aglet is a small sheath that allows to easily slide a lace or ribbon through an eyelet hole. During the seventeenth century, these had became purely decorative and could be made from fragile minerals such as rock crystal or be adorned with diamonds.

An exhibition about Les Mousquetaires at the Musée de l'Armée in 2014 displayed some historic objects related to the novel by Alexandre Dumas. Among them were ferrets owned by the Marquise Arconati-Visconti from circa 1895-1897. They are no. 48 in the lower half of this image from the exhibition catalogue: 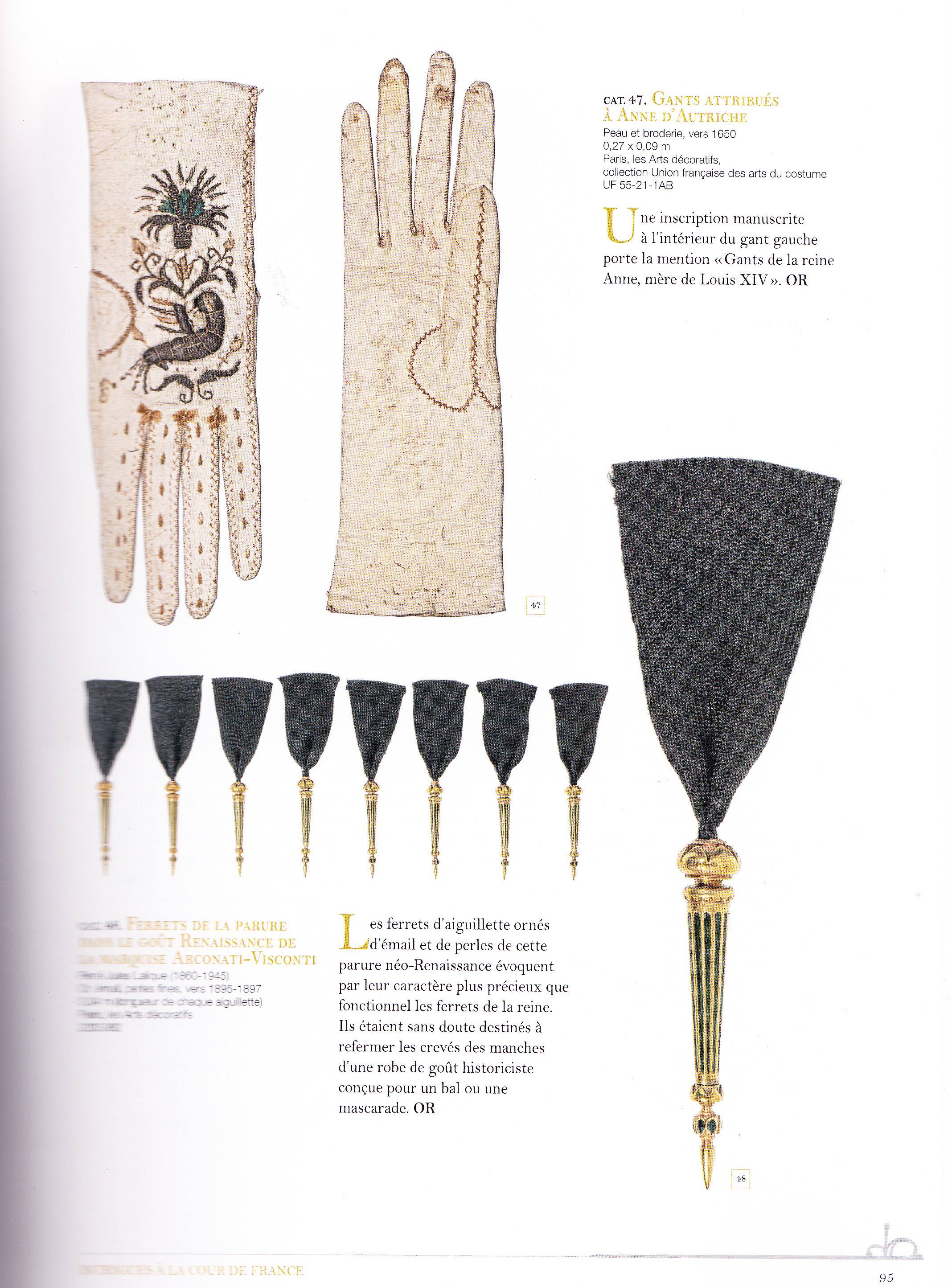 How these ferrets were worn can be seen in the following portrait of Anne of Austria, where they are attached to red ribbons: 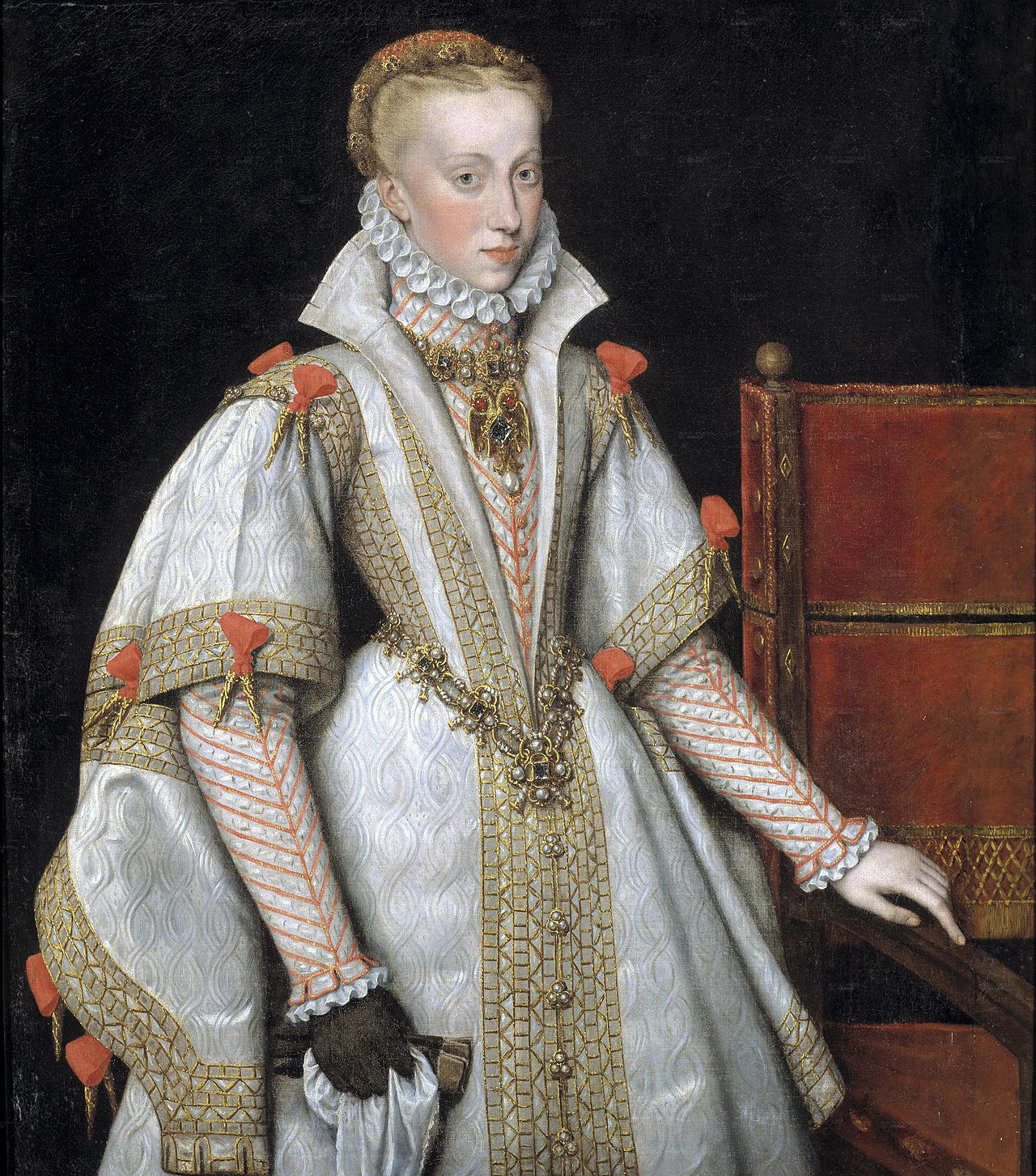 20
What was a “prince” in Dostoevsky's times, i.e. mid-late 19th century?
7
Can the apparent age discrepancies in The Count of Monte Cristo be reconciled?
3
Explain the bidding in ‘The Unprincipled Affair of the Practical Joker’
4
Can I read “Twenty Years After” by Alexandre Dumas without reading “The Three Musketeers”?
2
What is Meursault's problem with the heat?
2
Meaning and historical reference in “Ind Aff”
4
In Swimming in the Dark, why does Beniek go through the preparations for First Communion?