As Aurorar0001 says, Watership Down is a real place name in Hampshire, England. The following comments are meant to shed some light on the origin of this place name.

The second part, Down, is a noun and here has a meaning similar to 'hill'. To quote the Merriam-Webster dictionary, a down is "an undulating usually treeless upland with sparse soil — usually used in plural: sheep grazing on the grassy downs" (link; "down, noun (2)").

The first part, Watership, derives from Old English wæterscipe, a neuter noun with the meaning 'a body of water, a piece of water, water' (Bosworth Toller's Anglo-Saxon Dictionary, link). Another source gives the meaning of the Old English word as 'conduit, water-channel' (Gover et al. 1970, p. 346).

The word part -ship here has nothing to do with a boat, but is a derivational suffix like in friendship, hardship, township etc.

Names similar to Watership occur also in Warwickshire, and if you were to look for them, you would likely find them in other areas of England as well. For Warwickshire, you find Watershut Meadow and (in a historical spelling) Watershippe feilde (Gover et al. 1970, p. 346).

The name Watership Down therefore had an original meaning 'uplands in the watery area', 'uplands by the water-channel' or something along these lines. 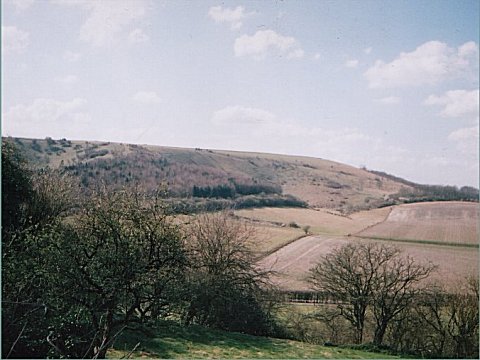