What does it mean to peer from a dewball?

In Ted Hughes' "Crow and the Birds", the lines before the ending read:

While the bullfinch plumped in the apple bud

And the goldfinch bulbed in the sun

And the wryneck crooked in the moon

And the dipper peered from the dewball

I may be peering reading too much into this single line, but I'm not a native speaker and hence I afraid I'm missing something simple. What do you think?

Caveat that this is speculative rather than authoritative...

In this poem Hughes clearly relates some of the birds to his own memories in the earlier lines and it is usually clear what kind of occurrence he is recalling, a swallow in a cave, a bluetit dodging past a washing line…, the action of the bird is clearly described. But in this set of four lines the descriptions seem more obscure, how does a bullfinch plump in an apple bud? How does a goldfinch ‘bulb’, be it in the sun or anywhere else? What does it mean for a wryneck to ‘crook in the moon’?

Perhaps the difference is that the swallow and the bluetit are fitting themselves around human activity and the Finches, Wryneck and Dipper are interacting only with the natural world even if those interactions seem more the work of imagination or myth than natural science. Apple bud, sun and moon in which the finches and Wryneck are all very rounded forms, albeit ones that the birds cannot literally be in. I think this frees us from the need to see the Dipper as literally being situated within a ball of dew.

I explored the idea of mythology, the Wryneck is apparently associated with the moon in Egyptian mythology and Native American Myths tell of Goldfinches being painted with sunlight. I couldn’t sift anything relevant from search results for mythology of Bullfinches (for predictable reasons) or for Dippers. But the trouble with birds and mythology is that ever culture and subculture has its tales about birds and it would be impossible to light with any certainty on one myth and declare it to be Hughes’ source.

But, since the poem is effectively ‘scenes from a life’ it leaves me wondering if the references are part of such a personal mythology that an outsider to that life could never hope to recognise them. The descriptions sound almost like the coded memories of families. I recall in some novel a family’s habit of specifying the amount of drink they wanted by numbers of birds rather than ‘fingers’ as the shared recollection of a childhood glass with chickens up the side became their family metric, ‘Whiskey? Just to the second bird!’

I could imagine these lines being references to artworks, misremembering the tree from Hokusai’s Bulfinch and Weeping Cherry or some series of artworks where the round shapes of the bud, sun, moon and dewball provide a connected structural theme. It could be anything.

But a Dipper peering out from a ball of dew is only an impossibility because of its scale. Dippers feed underwater, but not being long legged wading birds, when they stand on the bed of s stream their whole body is under the surface and they use their wings as aerofoils (aquafoils?) to create downward pressure from the current to counteract their feathery buoyancy.

I used to watch one feeding in the stream under the window in my parents’ house and can attest that a dipper can appear to be peering from under the water.

If a Bulfinch can perhaps plump near an apple bud, rather than in one, a Goldfinch could no doubt ‘bulb’ in the light of the sun not in the fiery ball and a Wryneck might twist to gaze at the moon rather than reside in it then perhaps a Dipper can peer through the waters of a stream and sprinkle dewballs as it emerges and shakes water from its feathers.

Or, more prosaically, my final piece of research may undermine all of the above... It seems that Dippers make small, enclosed, round nests close to the water and cover them with moss. 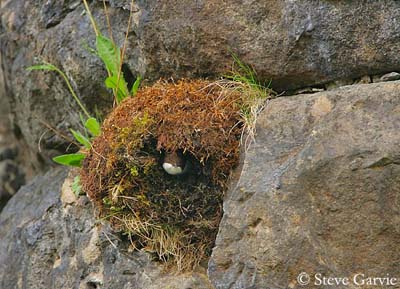 Water spray will bead up on moss, so it may be that a Dipper's nest can look like a ball of dew. Which makes me wonder if the Apple-bud, sun and moon have all been called the nests of their respective birds in Folklore...

Not the answer you're looking for? Browse other questions tagged meaning poetry ted-hughes or ask your own question.