In book III of Robert Browning’s The Ring and the Book, Violante adopts an unwanted new-born child and passes her off to her husband Pietro as their daughter Pompilia:

Well, having gained Pompilia, the girl grew
I’ the midst of Pietro here, Violante there,
Each, like a semicircle with stretched arms,
Joining the other round her preciousness—
Two walls that go about a garden-plot
Where a chance sliver, branchlet slipt from bole
Of some tongue-leaved eye-figured Eden tree,
Filched by two exiles and borne far away.

What is the meaning of the line in bold? ‘Eden tree’ would seem to be one of the trees in the Garden of Eden, either the tree of life, or the tree of the knowledge of good and evil. ‘Tongue-leaved’ might mean ‘with leaves like tongues’ or ‘with leaves that speak’, but I can’t make any sense of ‘eye-figured’.

Cook says of this line:

The reference in this passage must be to a legend or allegory which I cannot trace. A friend suggests that the use of the epithets ‘tongue-leaved’ and ‘eye-figured’ was ‘due to some allegorical woodcut of the early sixteenth century, representing the tree of the knowledge of good and evil’.

Arthur Kemble Cook (1920). A Commentary Upon Browning’s The Ring and the Book, p. 57. Oxford University Press.

Have scholars been able to trace the reference?

This is an example of the kind of ‘allegorical woodcut’ that Cook’s friend may have had in mind: 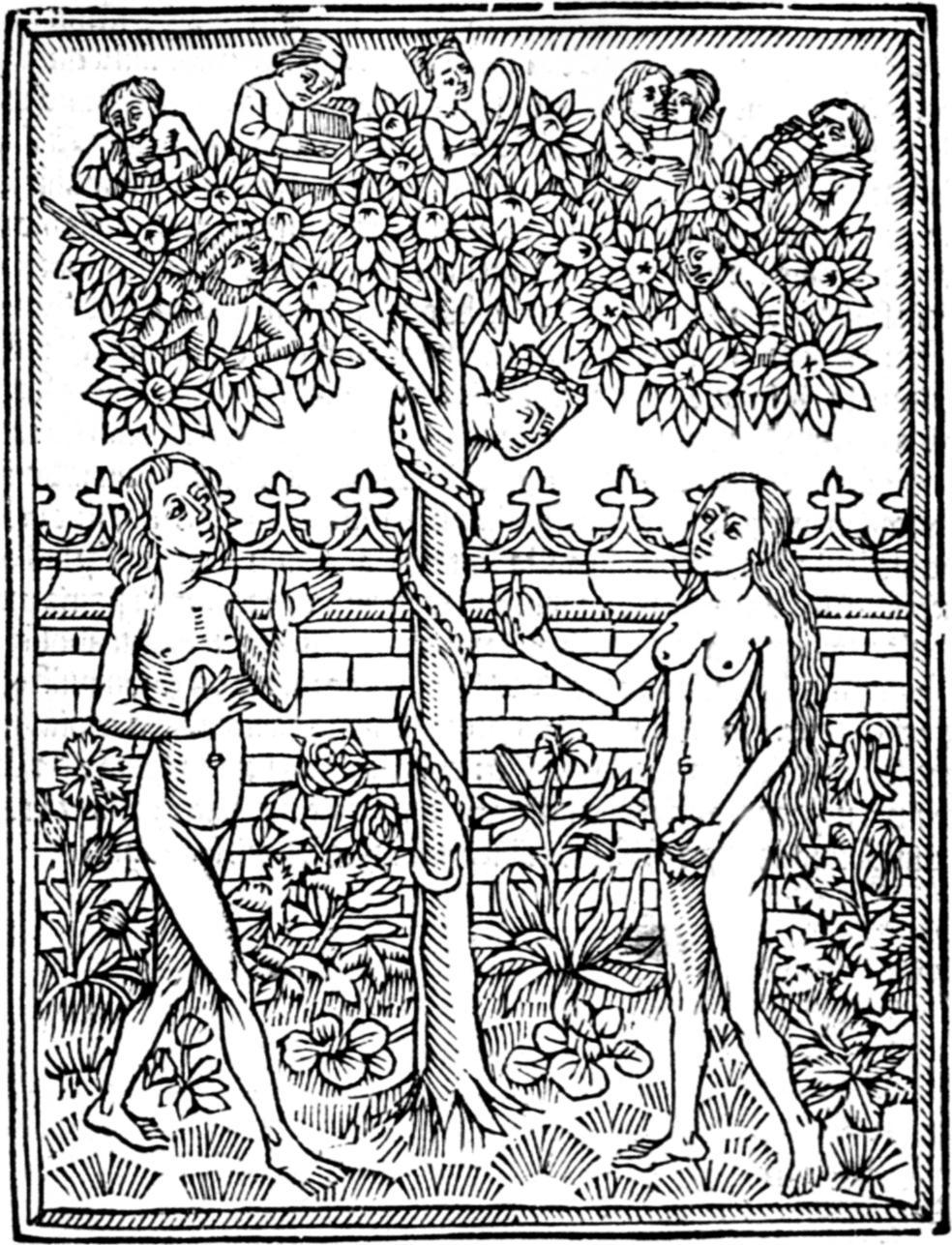 The tree depicted here is simultaneously a tree of vices bearing the seven deadly sins (clockwise from left: wrath, envy, greed, vanity, lust, gluttony, sloth) and the tree of the knowledge of good and evil in the garden of Eden. It has figures with eyes and tongues among its leaves, so it could be described as ‘tongue-leaved, eye-figured’.

Trees of vices (‘arbores vitiorum’) and trees of virtues (‘arbores virtutum’) were common types of medieval allegorical illustration, so there is no reason to suspect that Browning was referring to this woodcut in particular.

This legend is part of the Queste del Saint Graal, a 13th century prose romance in Old French. Late in their quest, Bors, Perceval and Galahad encounter the Ship of Solomon, aboard which there is a bed equipped with three spindles coloured white, red and green, and on which lies the Sword with the Strange Hangers: 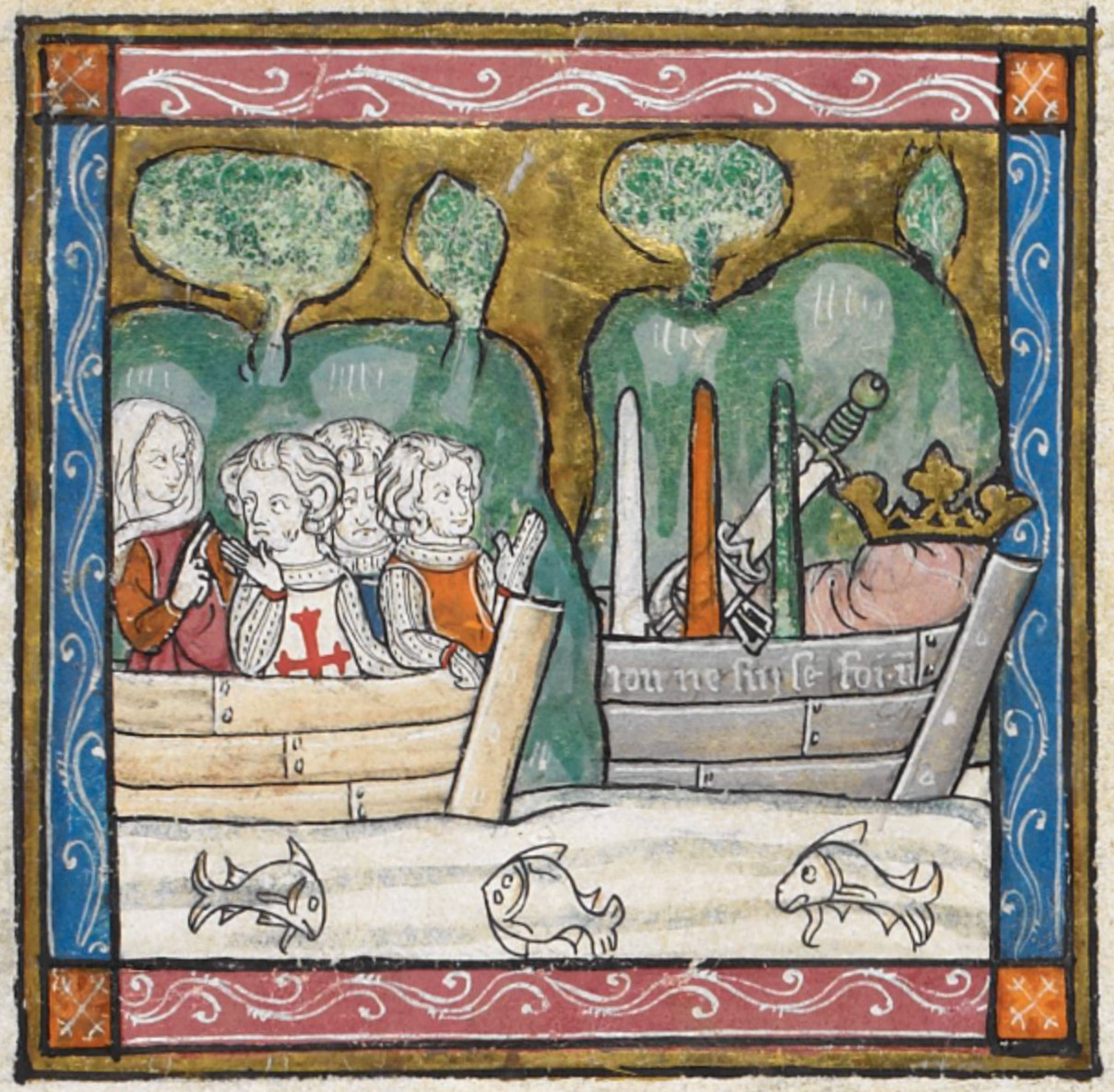 The grail maiden tells the history of the ship and its spindles to the knights. The portions of this story that correspond to the image in The Ring and the Book are as follows:

Eve the sinnner, who was the first woman, picked the fatal fruit, and from the same tree a little branch along with the fruit. And when they were outside [of paradise], Eve still held the branch in her hand, without noticing it. But when she looked at herself, and saw the branch, she realised that it was still as verdant as if it had only just been picked. When it had been fixed in the earth, the branch, by the will of the creator whom all things obey, took root.

This transplanted branch grows into a new ‘Tree of Life’ that later supplies the red spindle of the bed on the Ship of Solomon, and its descendants the white and green spindles.

This legend corresponds closely to the lines in The Ring and the Book: Eve accidentally acquires a little branch (‘chance sliver’) from the tree of the knowledge of good and evil (‘Eden tree’); Adam and Eve are driven from Eden (‘two exiles’), she having taken (‘filched’) the branch with her.

The Quest del Saint Graal was translated and adapted by Thomas Malory in the later part of his Morte d’Arthur, where the legend of the tree of life is briefly summarized as follows:

when sinful Eve came to gather fruit, for which Adam and she were put out of paradise, she took with her the bough on which the apple hung on. Then perceived she that the branch was fair and green, and she remembered her the loss which came from the tree. Then she thought to keep the branch as long as she might. And for she had no coffer to keep it in, she put it in the earth. So by the will of Our Lord the branch grew to a great tree within a little while

Malory bungled his retelling of the story by omitting to mention the descendants of the new tree of life, so that in his version the green and white spindles are made ‘of the green tree and of the white tree’, these trees having not previously been mentioned.

The Queste del Saint Graal was printed in 1864, so that Browning also had the opportunity to read it in full in the original Old French, or in Furnivall’s summary:

After Eve had yielded to the Devil’s advice, and plucked a branch of the tree of life [sic], she gave it to Adam, who picked off the fruit; and when they had eaten the fruit, they saw that they were carnal and naked, were ashamed, and covered themselves with their hands,—Eve still keeping the branch of the Tree of Life [sic]. Then God called Adam, and said he should eat his bread in sweat, and that Eve should bring forth in pain; and God drove them from the Paradise of Delight. Eve says she will always keep her branch; but, having nothing to keep it in (for things then were nothing like they are now), she stuck it in the ground, and it took root there.

Furnivall seems to have conflated the two trees of Genesis 2:9, or perhaps he got distracted by the new ‘Tree of Life’ that grew from the cutting.

The image of Pompilia as a transplanted cutting recurs in book VII of The Ring and the Book. Here Pompilia describes herself similarly to the way ‘Other Half-Rome’ had described her:

Designate just the time for planting me
(The wild-briar slip she plucked to love and wear)
In soil where I could strike real root, and grow

This is just one of a number of comparisons between Pompilia and a plant in the early part of book VII:

“Why is it you are turned a sort of tree?”

Well, God, you see! God plants us where we grow.
It is not that, because a bud is born
At a wild briar’s end, full i’ the wild beast’s way,
We ought to pluck and put it out of reach
On the oak-tree top,—say, “There the bud belongs!”

The wilding flower-tree-branch that, all those years,

To a soul i’ the bud, so starved by ignorance,
Stinted of warmth, it will not blow this year.

These botanical images represent Pompilia’s passivity and stoicism under her husband Guido’s cruelty.

Not the answer you're looking for? Browse other questions tagged meaning robert-browning the-ring-and-the-book or ask your own question.

12
Why did Martin Eden live at night with the gods in a colossal nightmare?
9
Meaning of "I shut my tongue against my fly"
2
What does Browning's cloistered soliloquist mean by ‘Hy, Zy, Hine’?
6
"The Apple Tree" ending and the meaning behind it
12
What does "skimmish" mean, in this eye dialect?
2
What are the "unknown land" and "eye of faith" in "Our Casuarina Tree"?
4
What does Browning's patriot mean by "Paid by the world, what dost thou owe"?
5
What does “Hoti’s business” refer to, in Browning’s ‘A Grammarian’s Funeral’?