In "Passing by" by Robert Herrick, how does Cupid "range her country" and change the narrator's heart?

I'm looking for an explanation of the first two lines of the third verse (see below) of the poem "Passing by" by Robert Herrick.

I assume that "Cupid is winged" means that Cupid has wings, but what does "and doth range her country" mean ("her" referring to the lady?) and why does that result in "my heart doth change"?

There is a lady sweet and kind
Was never face so pleased my mind,
I did but see her passing by
And yet I love her till I die!

Her gestures, motions and her smile
Her wit, her voice, my heart beguile;
Beguile my heart, I know not why
And yet I love her till I die!

Cupid is winged, and doth range
Her country; so my heart doth change.
But change the earth, or change the sky
Yet will I love her till I die!

You have been misled about this poem! It’s not known to be by Herrick; the text you quoted is missing three verses; there are a number of textual errors; and it has been mis-punctuated, making nonsense of the lines you asked about.

The poem first appeared, without attribution, in Thomas Ford’s Musicke of Sundrie Kindes (1607). So the text may be original to Ford, or if he got it from another poet there is no record as to whom. Robert Herrick was born in 1591, and although it is possible that his poems were circulating in 1607, when he was sixteen, there is no evidence of this: the earliest extant manuscripts are from the 1620s.

The original text had six verses, given below (the reduction to three verses may be due to Arthur Quiller-Couch, who included it in the Oxford Book of English Verse, 1250–1900). I’ve bolded the words that have been changed in the version quoted in the question.

There is a Ladie sweet & kind,
Was never face so pleasde my mind,
I did but see her passing by,
And yet I love her till I die.

Her iesture, motion and her smiles,
Her wit, her voyce, my hart beguiles,
Beguiles my hart, I know not why,
And yet I love her till I die.

Her free behaviour winning lookes,
Will make a Lawyer burne his bookes
I toucht her not, alas not I,
And yet I love her till I die.

Had I her fast betwixt mine armes,
Iudge you that thinke such sports were harmes,
Wert any harm? no, no, fie, fie,
For I will love her till I die.

Should I remaine confined there,
So long as Phebus in his spher,
I to request shee to denie,
Yet would I love her till I die.

Cupid is winged and doth range,
Her countrie so my love doth change,
But change she earth, or change she skie,
Yet will I love her till I die.

Notice that in this version there is a comma after ‘range’, and no punctuation after ‘countrie’, which allows us to make sense of these lines. Cupid is the Roman god of sexual love, depicted with wings since antiquity; ‘range’ means “rove, roam, wander” (OED); ‘change countrie’ is a metaphor for going far away; ‘so’ means “to that extent; in that degree” (OED); and ‘my love’ is the lady. So the lines mean that however far the lady travels, Cupid flies after her.

The mis-punctuated version was popularised by a musical arrangement:

Another example of the way in which words are misunderstood by composers and editors is the anonymous Elizabethan poem, ‘There is a lady sweet and kind’, in which the last verse has been subject to unconscionable twisting. […] Paraphrased, then, the verse means that Cupid flies about looking for the coy lady who runs away from him—fancifully to another place or ‘countrie’. But wherever she may go in earth or sky, ‘Yet will I love her till I die’. One composer whose setting of this used to be popular removed the comma after ‘range’ and set the words as ‘doth range her country’, following this with a break and the declaration that either the singer’s affection or that of his lady-love had changed. 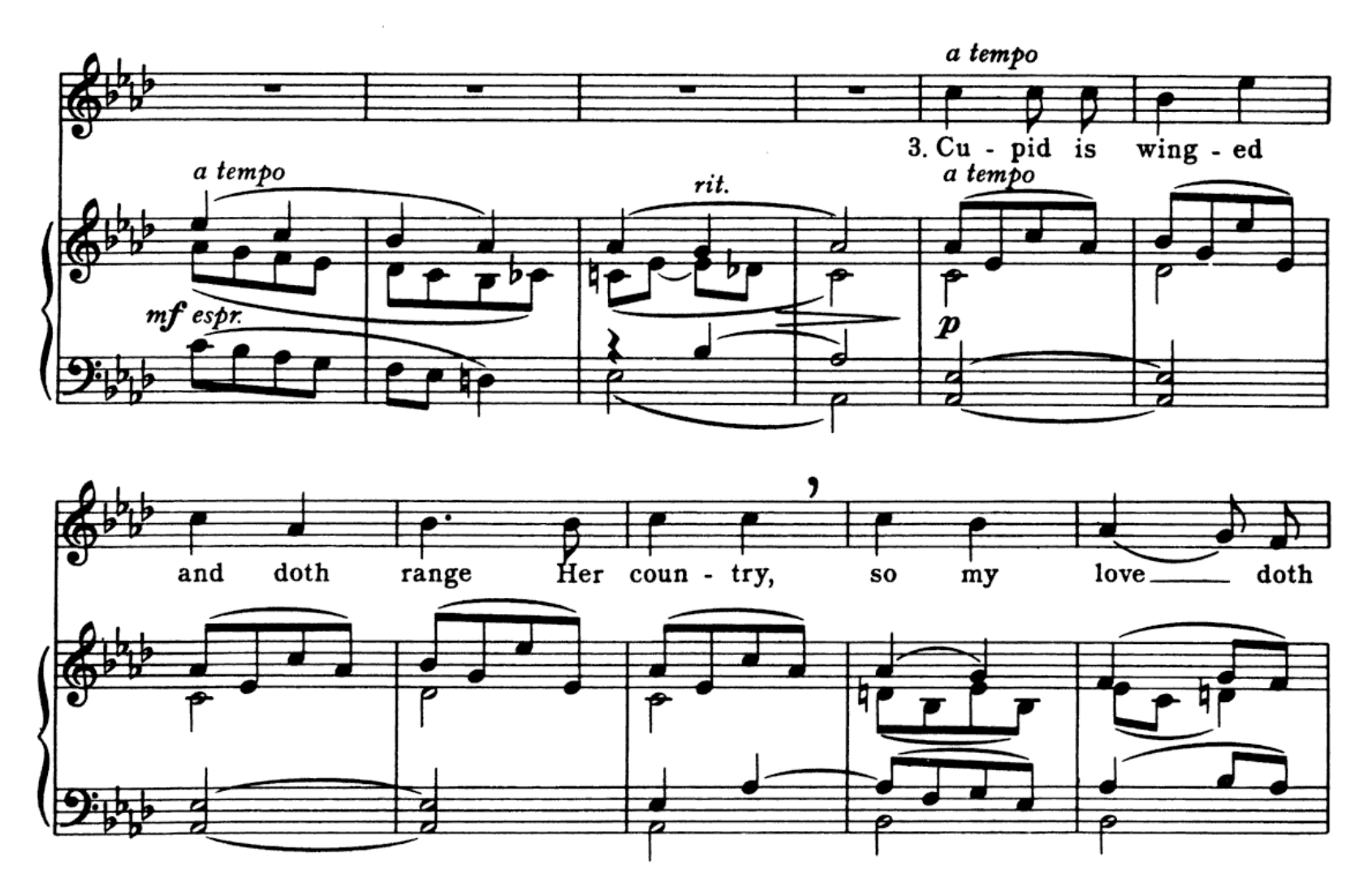 The introduction to this setting in Pathways of Song says:

Observe the irregular phrasing in the third verse where the literary transcends the musical sense, and we sing “and doth range her country” without breaking the phrase.

Purcell was also responsible for popularising the attribution to Herrick, as can be seen on the cover: 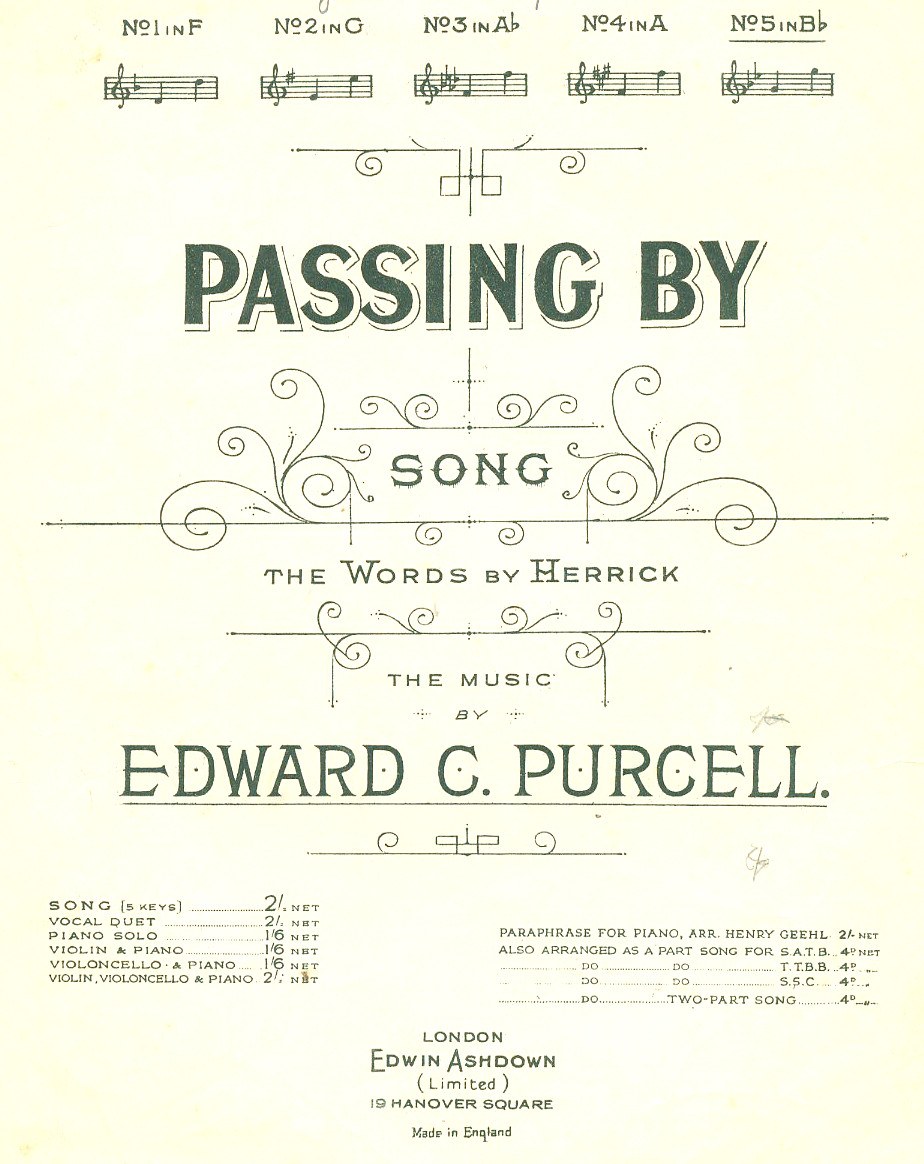 However, as Peter Shor points out in comments, although Purcell popularised it, he was not responsible for the mangled version, as it previously appeared in this form in Rare poems of the sixteenth and seventeenth centuries (1883), edited by William James Linton:

Cupid is winged, and doth range
Her country,—so my Love doth change;
But change the earth or change the sky,
Yet will I love her till I die.

and in Odds and Ends about Covent Garden (1866), edited by ‘John Green’ (George Henry Townsend), where ‘still’ replaces ‘will’ in the last line:

Cupid is winged, and doth range
Her country, so my love doth change
But change the earth, or change the sky:
Yet still I love her till I die.

Perhaps there is a yet earlier version from which Townsend and Linton derive.

I am not sure where ‘my heart’ originated. It may be due to mandolinist Jim Hancock, who performed the song on his album Sing We Enchanted with these lyrics.

Gareth Rees's answer is of course correct in pointing out that (a) the poem is unlikely to be Herrick's, and (b) the version in the question is truncated and with the punctuation altered. However, the last verse does make meaning in both versions.

First, the version the question cites:

Cupid is winged, and doth range
Her country; so my heart doth change.
But change the earth, or change the sky
Yet will I love her till I die!

So it means Cupid ranges over her country. In this case, her country is her body. This refers back to the previous stanza of this version:

Her gestures, motions and her smile
Her wit, her voice, my heart beguile;
Beguile my heart, I know not why
And yet I love her till I die!

Next, the earlier version given in Gareth's answer:

Cupid is winged and doth range,
Her countrie so my love doth change,
But change she earth, or change she skie,
Yet will I love her till I die.

1 a : to roam at large or freely
b : to move over an area so as to explore it

So the stanza could be interpreted to mean that the lady is moving to a different country. The speaker is saying that since the lady epitomizes winged Love, her moving is understandable. Yet no matter where she is, he will lover her forever.

That said, given how manuscripts circulated in the 16th and 17th C., with neither spelling nor punctuation standardized, I would hesitate to read too much into the presence or absence of a comma as indicating the correct meaning. Editorial choices such as punctuation or even spelling impose unitary meanings on texts, when the manuscript record or even early print records are much more ambiguous. For example, here is the 1623 Folio text of the first few lines of Hamlet's famous "To be or not to be" soliloquy:

To be, or not to be, that is the Question:
Whether ’tis Nobler in the mind to suffer
The Slings and Arrows of outragious Fortune,
Or to take Armes against a Sea of troubles,
And by opposing end them: to dye, to sleep
No more;

Here is how a modern editor, Harold Jenkins, normalizes these lines in the Arden edition, second series (1982):

To be, or not to be, that is the question:
Whether 'tis nobler in the mind to suffer
The slings and arrows of outrageous fortune,
Or to take arms against a sea of troubles
And by opposing end them. To die—to sleep,
No more;     (III.i.56–61)

The insertion of a comma after sleep (in the last quoted line but one) guides the reader to a specific meaning: "To die is nothing more than to sleep." However, the Folio text is not as definite as that. A defensible interpretation of the Folio punctuation, which lacks the comma after sleep, is: "Dying means being unable to sleep any more." Perhaps Hamlet is saying that our life is something like a sleep, and what we think we experience is just a dream? Perhaps when we die, we wake up and so are free of the illusion that is life?

The point here is that the punctuation of early modern texts, being pretty sparse, is not a reliable guide to the intended meaning. The original sources can be open-ended. Later editors modernize the texts and insert punctuation based on their own interpretation of the meaning. William Empson (mentioned in a since-deleted answer to this question) points to the several possible readings of this last verse, which he punctuates as follows:

Cupid is winged and doth range;
Her country so my love doth change. But change she earth, or change she sky, Yet I will love her till I die.

He elaborates on the many ways that the last two lines could be interpreted:

Ultimately, then, the version of the poem given in the question makes certain editorial choices in order to spotlight a particular meaning. The earlier text we have may or may not be the original. As Gareth says in his answer, it is not known whether the poem was written by Ford. Modern editions treat it as anonymous. So Ford's punctuation too may reflect his own choices. Hence, we cannot say for sure that Ford's version preserves the original meaning of the last stanza and the later, 19th C. version is simply wrong. The textual history of early modern poetry is too complicated for us to be confident about the real meaning of any given poem based simply on its earliest extant appearance in manuscript or print.

2
Meaning of "Israelites" in Byron's Don Juan: "That all the Israelites are fit to mob its next owner for their double-damn'd post-obits"
5
In the Sonnet 29 by Shakespeare, does the speaker pity himself over lack of skill as an artist or contentment?
2
To whom is Anne Bronte's "A Reminiscence" addressed?
3
Her sympathy was ours
3
What kind of sonnet is Sonnet 24 of Sidney's "Astrophel and Stella"?
11
How do these lines in Shakespeare's Sonnet 151 mean what they're supposed to?
4
What is the significance of the 40-year period referred to in this Francisak Bahusevic poem?