Which book is the maxim 大道無門 from?

From which book is the maxim 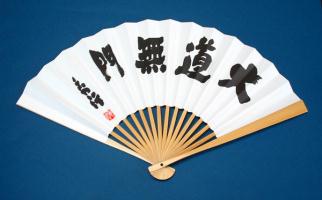 Zen kōan だいどうむもん "Daidō mumon"
"to achieve great understanding there is no single but thousands of ways".

“大道無門” is the first line of a verse:

This is from the introduction to 無門關, usually translated as The Gateless Barrier or The Gateless Gate, a collection of kōans by Zen master Wúmén Huìkāi (無門慧開), published in 1228. (He is perhaps better known in the West under the Japanese version of his name, Mumon Ekai.) In Robert Aitken’s translation:

The Great Way has no gate;
there are a thousand different paths;
once you pass through this barrier,
you walk the universe alone.

“大道無門” contains a pun: the author’s name Wúmén is written with the same characters (無門) as “no gate” so the line can be understood as “Wúmén’s Great Way” as well as “the great way has no gate”.

Hideyuki Fujisawa (藤沢秀行) was a professional Go player also known for his calligraphy: presumably the writing on the fan is his work.

3
pre-Meji Japanese book/essay about Strategy
5
In what book does Paul Dirac say, "Some new ideas are here needed"?
3
What did Conrad mean by teaching to see is everything?
14
What is the source of "You can achieve a lot with hate, but even more with love" (Shakespeare?)