I read this poem in the 5th or 6th grade or so, so that'd be 2012-2014 (somewhere in there). It was out of some packet copied out of a book for this language arts extension thing (I remember the book being very keen on something called "Jacob's ladders" I think, for difficulty of questions or something like it - this was part of a gifted/talented informal class). It was in english but it could very well have been translated. I remember very clearly that it started with lines like

Tell me a story, said Witch's child
Of the beast so fierce and wild

Something nice to make me sleepy.

I also remember it was reasonably long - it filled up the whole page, which was around 11x13 since it had been copied, in a normal size font with a small illustration at the bottom, I think.

I have no idea how I've remembered it this whole time, so I thought I might actually try to find the poem. Thanks!

‘Bedtime Stories’ by Lilian Moore has appeared in many collections, but I think it was originally published in See My Lovely Poison Ivy: And Other Verses About Witches, Ghosts and Things (1975) with an illustration by Diane Dawson. 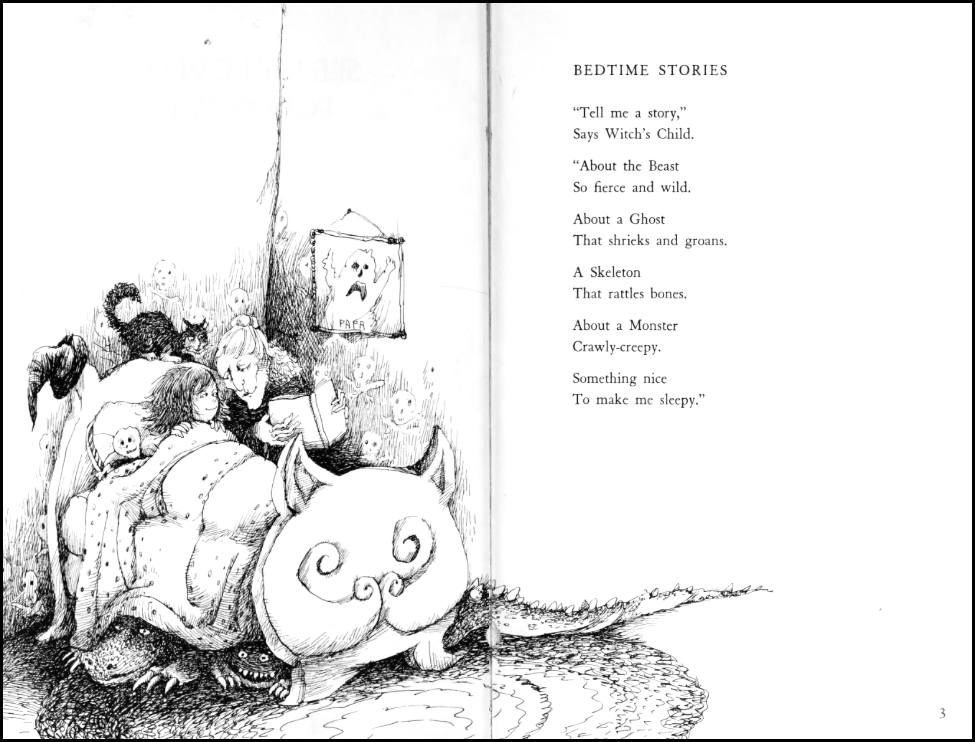 If you’ve seen this poem attributed to a child, that’s because it was plagiarized:

Language Arts, a journal of the National Council of Teachers of English, published in its February, 1983 issue a work by a seventh grader:

Tell me a story
Said the witch’s child
[…]
So crawly and creepy,
Something nice to make me sleepy.

This is clearly with several word, article, and punctuation changes the work of Lilian Moore, a noted children’s poet.

(This is from a long list of examples of published poetry attributed to schoolchildren, that were in fact plagiarized.)

7
Poem about a young man who dies
18
Story about child slavery and mutilated body parts?
10
Story about father who looks through microscope for the first time
4
Can you identify this poem about axolotl, fish, salamander
4
Poem about a joker with disorganized attire
5
Help identify the story "I did not sell my child"; ends with the grown up child deserting parents