How can the moon be in the first quarter and in the new moon phase on the same night in H. G. Well's "The Invisible Man?

In the novel The Invisible Man (By H.G. Wells), chapter 17 and 18 appear somewhat contrasting in the description of the night sky. In chapter 17, the author portrays the sight of a faceted pavilion, pier glow, and the moon hung in the first quarter. The next chapter says "the night was very quiet and still, and the new moon was setting over the down". Both chapters are set on the same night.

Please clarify, there might be some mistake in reader's understanding.

The Invisible Man does contain some chronological inconsistencies.

From the opening paragraphs of the article "A Tissue of Moonshine: the Mechanics of Deception in The Sea Lady" by B.D. Sommerville:

Many of H.G. Wells’s early scientific romances and fantasies contain internal chronological, spatial or factual contradictions. There is, for example, a contradiction in longitudinal bearings in The Island of Doctor Moreau which is the subject of a ‘silent correction’ by Leon Stover. Two chronological discrepancies have been noted in The Invisible Man, while conflicting geographical and chronological information is given by Bedford in the narrative of The First Men in the Moon. The Time Traveller of The Time Machine contradicts himself about the times of his departure and return.

Most scholars attribute these discrepancies to error by the author, editor or typesetter. There are good reasons, however, for considering these, and other such contradictions in Wells’s early books, to be a deliberate strategy by him. The most compelling evidence for this view is that they occur only in his scientific romances or fantasies, and not in his novels. In a paper published in 1994, I argued that the chronological contradictions in The Time Machine are deliberate, and hold the key to an alternative plot which reveals the Time Traveller’s vision of the future to be a dream.

The paper he refers to regarding The Time Machine was published in The Wellsian, Volume 17 (1994), and it can be downloaded here. It's an interesting read, but not strictly relevant to answering your question. The more useful references are those cited for his statement about The Invisible Man, namely the following sources:

The first two of these - the Wellsian articles - can be downloaded from the internet, namely here and here. The second is essentially an erratum/correction to the first, after becoming aware of an edition he hadn't known about before.

There are many slightly different versions of The Invisible Man, as can be seen for example in the following excerpts (screencap taken from the first David Lake article cited and linked above): 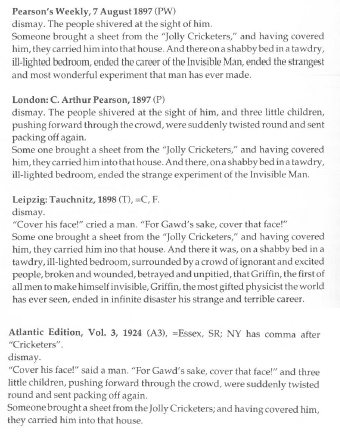 In analysing these different versions of the text, Lake also discusses some of the errors which appear in them, ranging from misplaced words ("curious" instead of "furious") to chronological discrepancies such as the one you noticed about the dates in February:

The approximate date is given in the first sentence of the novel, all versions: "Early in February". But an exact date appears in the first line of Chapter 3 (PW, Chapter ) and in PW, P, NY, A3 and Essex it is "the 29th day of February". The error is particularly glaring in PW, where the discrepant dates are on the same first page of the novel, at the tops of the first and third columns. Howere, Wells only caught the error in time for the Tauchnitz edition, where he emended the Chapter 3 reading to "the 9th day of February". [...]

Unfortunately, Wells did not notice that his correction "9th" left another passage discrepant. This is in Chapter 4, all versions, except PW which omits. The villagers, suspecting Griffin of being on the run from the law, face the problem: "No crime of any magnitude from the middle or end of February was known to have occurred" (A3, p. 27). Since the crime in question could only have been committed by Griffin before his arrival, this suits "29th" but not "9th".

I also checked the book cited above, The Invisible Man edited by the same David Lake. It's available on Google Books, and he does notice one problem with the moon:

the new moon was setting over the down: an impossibility, at well past 2 a.m. (see previous chapter, p. 78). New moons set before midnight.

The inconsistency you've found is in the same vein as these. Wells was known for the chronological discrepancies in his early novels. It may be possible to draw some hidden meaning from such discrepancies, as Sommerville has attempted to do with other Wells stories, but frankly I think that's a little far-fetched, especially with small errors like this which he corrected in some editions.

Not the answer you're looking for? Browse other questions tagged h-g-wells the-invisible-man or ask your own question.