How can we explain the porter's order of events in The Arabian Nights?

In The Arabian Nights, translated by Husain Haddawy, the following chronology appears in The Story of the Porter and the Three Ladies on the 28th night (my emphasis):

She walked before him until she stopped at the door of a house, and when she knocked, an old Christian came down, received a dinar from her and handed her an olive green jug of wine...

the porter lifted the basket and followed her until she stopped at the fruit vendor's...

Then she stopped at the butcher's...

The porter, wondering at all these purchases, placed his basket on his head and followed her until she came to the grocer's...

The porter carried his basket and followed her until she came to the dry grocer's...

The porter carried the basket and followed her until she came to the confectioner's...

She smiled and walked ahead until she came to the druggist's...

Thus, the order of places that the porter visited was:

However, on the 37th night the porter recounts the events as follows (my emphasis):

Thus, according to the porter the order was as follows:

This is clearly different from the order mentioned above. For a visual aid, here are the two orders next to each other:

What is the explanation for this discrepancy?

Has anyone else ever noted this discrepancy and possibly tried to explain it? (A very quick Google search did not turn up anything.)

TL;DR: Most likely an error of composition or copying. 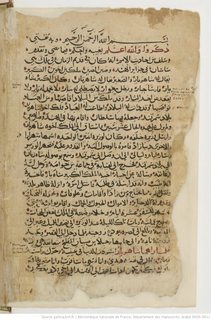 There is a lot of variation among the manuscripts of the Nights, and not all versions have the porter retell the list of shops. For example, in Edward William Lane’s 1853 translation, the porter in retelling his story says only, “this cateress loaded me and brought me hither”. But in all the translations I looked at where the porter does list the shops, there is a discrepancy between the original narration of the shopping trip, and the porter’s retelling of it.

Robert Irwin suggests that the variation between manuscripts is due in part to carelessness in copying, and in part to the use to which the manuscripts were to be put:

The Nights cannot have been seen as a canonical text which deserved special care or demanded accurate transmission; nor was it written to be read by scholars. It is unlikely that medieval copyists of manuscripts of the Nights had any great reverence for the text they were transcribing. Mahdi himself has noted the evidence, provided in the marginalia of a manuscript of the Nights now in the British Library, of a book dealer, Ahmad al-Rabbat, who traded in Aleppo in the late eighteenth century, who used to hire out copies of collections of stories and poetry—and when these collections began to suffer from wear, al-Rabbat would insert new pages, sometimes with new stories.

There was no reason for a scribal copyist of the Nights to take special pains to get the Arabic right, for it was never written in immaculate classical Arabic in the first place. Nor was there any reason to hesitate in adding or deleting stories, incidents or glosses. […]

In fact, it is likely that many copies of the Nights were written to be read aloud, whether by professional or amateur storytellers, and it may be that the storyteller had no need of the full text (never mind an accurate one!); he needed only an outline of a story on which he could embroider. Moreover, if storytellers themselves made copies of the text, they would very likely have added favourite elaborations of their own devising to stories in their repertoire.

Irwin’s description of the context of manuscript production is clearly also capable of explaining the internal inconsistency between the two lists of shops. The order of shops does not matter for the story, so why take pains to make it consistent? Given all the events that take place between the two lists, it is unlikely that a copyist will notice the discrepancy, let alone be troubled enough to correct it.

You can see Irwin’s proposed process of elaboration in operation by looking at the items on the shopping list. For example, at the fruiterer, the lady buys, in Galland’s translation (based on the earliest extant manuscript):

But in Haddawy’s translation (based on Mahdi’s critical edition), the list is much more elaborate:

yellow and red apples, Hebron peaches and Turkish quinces, and seacoast lemons and royal oranges, as well as baby cucumbers. She also bought Aleppo jasmine and Damascus lilies, myrtle berries and mignonettes, daisies and gillyflowers, lilies of the valley and irises, narcissus and daffodils, violets and anemones, as well as pomegranate blossoms.

Not the answer you're looking for? Browse other questions tagged arabic-literature one-thousand-and-one-nights or ask your own question.

1
In "Sinbad the Seaman and Sinbad the Landsman", from Arabian Nights, what does gars me pine mean?
2
Automata in the Arabian Nights, specifically "The Story of the Magic Horse"
9
What are the 1001 stories in One Thousand and One Nights?
6
Which book had a character read 1001 Arabian Nights for extra credit?