Is there significance to the location of Lilliput in Gulliver's Travels? 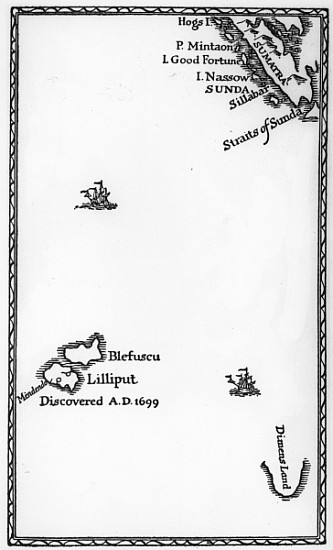 Not really the being-in-the-Indian-Ocean part, but the location in terms of how close it is to Blefuscu refers to England and France. They were separated by an 800-yard channel in the book.

The math of how big the fictional channel would be if the Lilliputians were 6 feet tall:

Lilliputians were 6 inches, 1/12 of the size of a 6-foot tall human. In chapter five, Swift says the channel between Lilliput and Blefuscu is 800 yards wide:

The empire of Blefuscu is an island situated to the northeast of Lilliput, from which it is parted only by a channel of eight hundred yards wide.

Multiplying 800 yards by a factor of 12 gives 9600, which is about 5.45 miles. For reference, 5 miles is 8800 yards. The real English Channel is 38000 yards/19 nautical miles across. Even though the measurements aren't the same, it's fairly clear they are supposed to be similar.

Also note that Jonathan Swift was satirizing the "holy wars" over Protestant vs Catholic beliefs, between England and France. They were fighting over breaking eggs in the novels, something Swift apparently sees as equal to the religious wars.

4
Who do the inhabitants of Brobdingnag represent in Gulliver's Travels?