Dante Alleghieri's Divine Comedy "has been translated into the most languages in the world & top printed work after the Bible"?

There is a MOOC about Dante Alighieri's Divine Comedy by the The University of Naples Federico II, in which a certain professor named Raffaele Giglio starts a video (published in September 2017) in which he recites some verses from the work.

I already become very suspicious about any credibility of this professor when he immediately afterwards uses the following vague words: "the greatest Humanity poet".

They were written by our great poet, the greatest Humanity poet, Dante Allighieri,...

But my question relates to whether or not there is a general consensus among scholars with regards to the following two claims:

...in his comedy, the book which, after the bible, has been translated into the most languages and dialects in the world, and is the top printed work of all time, after the Bible.

NOTE: It seems to be fashionable for some professors to shout that a book of their interest is the second most translated book in the world. In April 2016 for example, Alfredo Moro, who lectured at the University of Cantabria, claimed this for Don Quixote.

The "[second] most translated book after the Bible" apparently depends on whom you ask.

According to Professor Alfredo Moro, the 17th-century noel “Don Quijote de la Mancha is the second most translated book after the Bible”. In an interview from 2016, Moro said,

We are currently working on a project where we are assembling all the translations of Don Quijote in many languages all around the world and we have one language per chapter. (...) We find thousands of translations and thousands of authors who were influenced, e.g. British authors like Sir Walter Scott, Lord Byron, all wrote about Don Quixote and all were interested in Don Quixote.

However, according to the French newspaper Le Figaro, Antoine de Saint-Exupéry's Le Petit Prince (The Little Prince) is the second most translated book after the Bible: Apparently, the book's threehundredth translation was a translation into Hassaniya Arabic, a variety of Arabic spoken in Northwest Africa.

Other articles put other books at the top, e.g. The 5 Most Translated Literary Texts In The World and The 20 Most Translated Texts in History. Both these articles are probably based on Wikipedia's List of literary works by number of translations, which ranks The Adventures of Pinocchio (more than 300 translations) above The Little Prince (300 translations). Wikipedia also lists "Rhapsody of Realities Devotional", a text by a megachurch that is claimed to have more than 2000 translations. Dante's Divine Comedy is not even listed. It may be one of the most translated Italian works of literature, but The Adventures of Pinocchio appears to have more translations.

The Divine Comedy isn't in the top 50 of Wikipedia's List of best-selling books, where works such as The Adventures of Pinocchio and Umberto Eco's The Name of the Rose are ranked much higher than Dante's work.

One way to address this question is by quantifying the relative importance of Dante vis-a-vis other poets. MIT's Pantheon project is one resource for this. The link is to their webpage describing their methodology. Basically, Pantheon's project is an attempt at measuring Global Historical Popularity. Among the metrics they employ for selecting global popularity is the number of languages in Wikipedia into which an historical figure's work has been translated (minimum of 25 for inclusion into list). Among the limitations to their approach is the fact that the metrics are based solely on Wikipedia which is far from objective as it heavily weighted towards historically Western figures.

Without getting lost in the weeds of what Pantheon does and how they do it, Dante Alighieri ranks 3rd among Writers, a pre-determined Pantheon classification. First is Homer, then Shakespeare. Dante is followed by Virgil and Sophocles is fifth. The image below can be found on this webpage. Based on Pantheon and Wikipedia, Dante has been translated into 137 wiki language editions, Homer into 141 and Shakespeare into 163. Clearly the number of translations is not the only factor used in generating the results.

Dante was an indisputably great poet. That MIT's Pantheon ranks him 3rd is an almost arbitrary decision since any and all rankings can be reformulated to produce virtually any desired result, e.g., see Malcolm Gladwell's takedown of college rankings in his New Yorker article The Order of Things (February 2011) or this infographic summarizing all of the factors Google uses in creating its Pagerank metric for keyword searches ... : The Ultimate Guide to Google Ranking Factors in 2019 (by Sam Kusinitz). 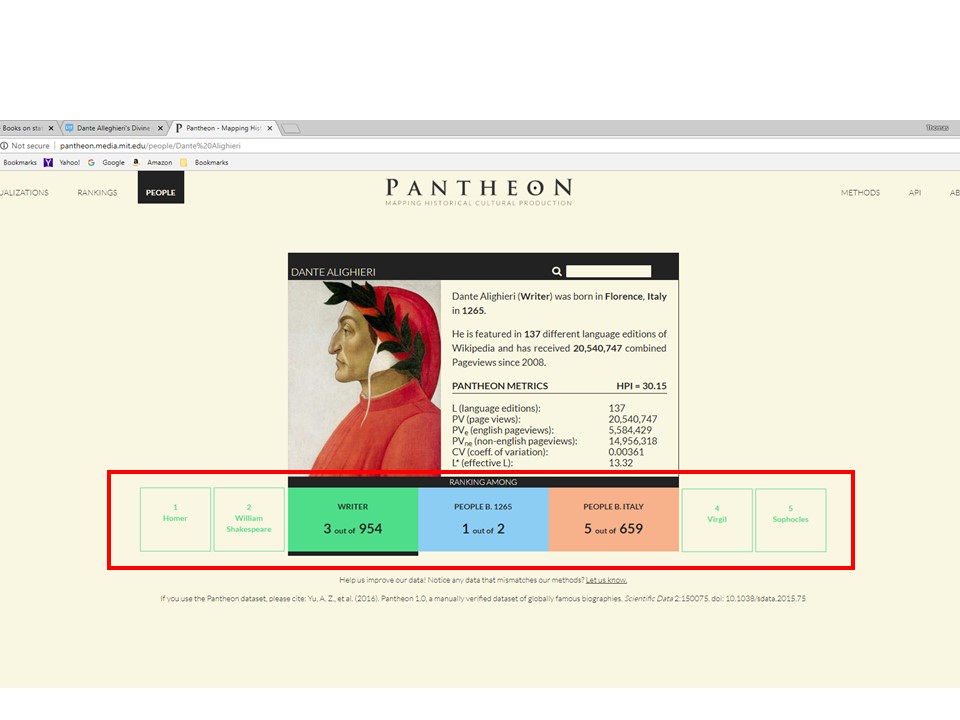 Not the answer you're looking for? Browse other questions tagged translation italian-literature dante-alighieri divine-comedy or ask your own question.

14
What are the challenges in translating a work of literature?
5
Did Dante plagiarize the Divine Comedy from Kitab al-Miraj?
3
How does one go about translating into English a foreign language book that has been poorly translated before?
5
What are the originals of the poems Tagore has translated from English into Bengali?
3
Has the Maltese poem "Fuq Għoljiet Dingli" ("On Dingli Cliffs") by Victor Fenech been ever translated into any other language?