When did Ursula (K) Le Guin use the K on her books and when not? 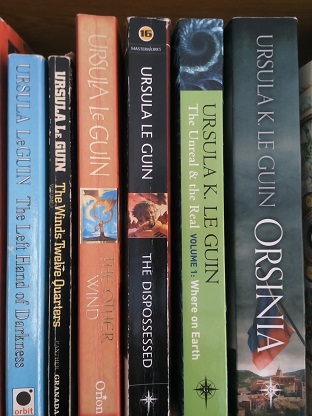 Some of her books bear the name "Ursula Le Guin"; others, "Ursula K. Le Guin". Why is this? Is it a time thing, i.e. she changed from not using the K to using it, or vice versa, at some point in her writing career? Did some publishers use the K and others not? Some other pattern/explanation?

As far as I know, she always went by Ursula K. Le Guin¹. This is not another case of Iain “Maybe” Banks. (By the way, K is not a middle initial, it's the initial of her maiden name. I don't know why she chose to write under that name.)

At that time and even later many female SF authors hid the fact that they were female by using a pseudonym that either had a male first name (e.g. André Norton, James Tiptree, Jr.) or had only initials (e.g. C. J. Cherryh). UKL did this once: when she submitted the short story Nine Lives to Playboy, she agreed to have it published under the name ”U. K. LeGuin“, with a bibliography that did not reveal that she was a woman.

Her website always uses the name “Ursula K. Le Guin” (except when she cites articles about her that use a shorter form of her name) and the initials “UKL”.

There may be a trend for non-US publishers to drop the K, but my shelves are not a statistically significant sample. A look through search results in the US Library of Congress² does seem to confirm this trend, but it is not systematic. Most of the entries with “Ursula Le Guin” are British editions or US reprints of British editions, but there are a few which don't correspond to any particular work or publisher.

All in all, Ursula K. Le Guin wrote as “Ursula K. Le Guin”. She once allowed a publisher to hide her first name, but she did not consider herself as having written under a pen name, rather as having had her gender hidden in one particular publication of that work. Some of her books show her name as “Ursula Le Guin”, but this is an abbreviated form of her name that does not seem to have any significance. I'm not aware that she ever wrote about it.

¹ Except before her marriage to Mr Le Guin, but as far as I know and Wikipedia confirms, she didn't publish anything before her marriage, unless it was an academic publication during her graduate studies.
² Sorry, I can't find a persistent URL for the results.

Not the answer you're looking for? Browse other questions tagged pseudonym ursula-le-guin or ask your own question.

9
Why is the future "a safe, sterile laboratory"?
6
Did Anne Elisabeth Stengl ever write a book under a pen name like she announced that she would? If so, what was it?
6
How and why were pronoun genders changed in "Winter's King"?
13
How did Ursula Le Guin translate the Tao Te Ching / Dao De Jing?