How is black being portrayed in "Black, Their Regalia" by Darcie Little Badger?

Black features fairly prominently in "Black, Their Regalia" by Darcie Little Badger - it's in the title, and black is fairly prominent throughout the story. The Apparently Siblings play neoclassical alt-metal fusion and look goth, wearing black a lot. For their saving-the-world dance, they wear black. When they meet the Plague Eater, it's described as "...ground crumbled, and darkness enveloped their world, a darkness so absolute, even phosphenes vanished."

In addition, in the copy I have the story is printed with a black background, and the whole thing feels rather "dark" in color. 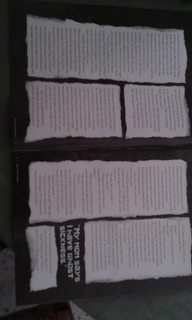 How is black being portrayed, though? As a positive thing? Negative thing? Just powerful?

From the very first line of the story, the story is presenting a contrast between the colors black and white:

Outside, the quarantine train was unblemished white.

Throughout the story, the color white is presented along with the plague - associating them together. The word "white" appears 14 times in the story, and almost every time it is associated with the plague, including the quarantine train being called the White Train.

The barracks for those infected with the plague are white:

Later, as the train chugged through Mariposa Compound, it passed rows of white barracks with slatted pitch roofs.

The IN MEMORIAM monument and its surrounding courtyard are also white:

With the setting sun at their backs, their shadows stretched ahead of them and parted the light that fell against the glittering white stones in the circular courtyard. A pillar—white marble, nine feet high—jutted from the belly of the courtyard. Its bronze plaque read: IN MEMORIAM. Already, several names had been etched into the base of the pillar, but there remained room for thousands on its blank faces: one canvas that Tulli hoped would remain empty.

There's also a mention of the bright moon being an "obnoxious" white:

The moon was full and high, its light spilling into the alley between barracks. When the radio preacher concluded, “. . . to kill with sword and with famine and with pestilence and by the wild beasts of the earth,” Tulli pressed the turkey vulture feathers over her eyes, blocking the obnoxious white globe.

Through all this, we can see that in the context of the story, white=plague.

On the flip side, black is consistently portrayed in association with comfort and healing. For instance, tea and a blanket:

During breakfast, Tulli and Moraine hovered over Kristi, prepared to steady trembling hands as she drank lukewarm black tea. Full-body shakes were a late-stage plague symptom, but they begin with subtle tremors, and Kristi shivered when she choked down the dregs in her cup.

And later on, of course, they dress in black and meet the Plague Eater:

The ground crumbled, and darkness enveloped their world, a darkness so absolute, even phosphenes vanished. As if drawn together by organic magnetism, Tulli, Moraine, and Kristi found each other and linked arms as they fell. “Are we dead?” Moraine hollered.
[...]
“Children,” a hoarse, tooth-rattling voice said, “I enjoyed the performance.” It came from everywhere, as if the void spoke.

It's worth keeping in mind that the Apparently Siblings are a "neoclassical alt-metal fusion" band... or, as Nurse Jon, puts it, "goth". The Plague Eater is a fan.

“Because,” the void said, “I am your biggest fan. Apparently Siblings, when you scream in dim places, I listen, and I relish what I hear.”

By having this goth, pitch-black entity who enjoys metal music be the one to remove the Big Plague, the story is challenging the "Satanic" association that comes to mind when people think "goth" and "metal", as well as the trope of "white" = good, and "black" = bad that's so prevalent in literature.

Further, the story consistently associates the color black with the Native protagonists of the story. It's the color that they need for their regalia, and, as noted above, it's associated with the Plague Eater figure, who is evidently a Native figure. White is associated with the plague, yes, but also the man-made structures - such as the barracks and the train - that would be associated with the white man on Native land. It's a subtle commentary on the plagues that the (white) Europeans brought over when colonizing the Americas, which killed a huge percentage of the population.

As a side note, the author, Darcie Little Badger, is a self-proclaimed goth. Quoting from the author blurb at the end of the linked publication:

It'd make sense that she'd want to write a story where the goth lifestyle is portrayed in a positive light - and have the main protagonists be goths.

Not the answer you're looking for? Browse other questions tagged short-stories symbolism darcie-little-badger or ask your own question.

15
Why is black evil and white good?
4
What is the significance/symbolism of the Cyclical book being cyclical in "The Library of Babel"?
8
Why does Merion react so strongly to being asked what their gender is?
8
What is the significance of a raised black flag?
1
Narration and internal dialogue in Mansfield's The Little Governess
2
Is either Rhoda Brook or Gertrude Lodge portrayed negatively in "The Withered Arm"?
3
Short story by Maugham about writer who sells their soul to see how they are remembered in the future, but their only mention is in this very story