I've long been confused about what exactly comprises the steampunk genre. Of course I realise that genres aren't usually things for which one can pin down exact definitions, but I don't even have a proper 'feel' for the steampunk genre or where its boundaries are.

The Wikipedia article is full of citation-needed notes, and I'm somewhat suspicious of its attempts at defining the genre. For example, it cites steam power as being a required part of steampunk stories (which also makes sense given the name steampunk, of course), but I'm pretty sure that many 'steampunk' things are actually based on other technologies such as clockwork: gears are a common device used to make objects steampunky. But I'm not really sure where else to look to get a proper idea (if not a rigorous definition) of what it means to be steampunk.

What is steampunk, really? What makes a work of literature steampunk or not?

The term was coined by science fiction author K. W. Jeter in a letter to Locus in April 1987:

Enclosed is a copy of my 1979 novel Morlock Night; I’d appreciate your being so good as to route it to Faren Miller, as it’s a prime piece of evidence in the great debate as to who in "the Powers/Blaylock/Jeter fantasy triumvirate" was writing in the "gonzo-historical manner" first. Though of course, I did find her review in the March Locus to be quite flattering.

Personally, I think Victorian fantasies are going to be the next big thing, as long as we can come up with a fitting collective for Powers, Blaylock and myself. Something based on the appropriate technology of that era; like "steampunks," perhaps….

Jeter modelled the term "steampunk" after "cyberpunk", which was coined by Bruce Bethke and used as the title of a novel first published in 1983.

The "punk" part of the word comes from the rock’n’roll terminology of the 1970s, "punk" meaning in this context young, streetwise, aggressive, alienated and offensive to the Establishment. A punk disillusion, often multiple—with progressive layers of illusion being peeled away—is a major component of these works. [Peter Nicholls, Science Fiction Encyclopedia]

So Jeter’s "steampunk" is "Victorian fantasy" written in the "gonzo-historical manner", and with a "punk" attitude, the exemplars being:

Of course, an original manifesto like this doesn’t necessarily capture the ways in which a subgenre evolves. Peter Nicholls and Dave Langford, writing in the Science Fiction Encyclopedia, describe three key features that characterized steampunk as it developed:

UrbanDictionary.com provides as good a range of definitions as any, as many as 11 by a current count.

Steampunk is a subgenre of speculative fiction, usually set in an anachronistic Victorian or quasi-Victorian alternate history setting. It could be described by the slogan "What the past would look like if the future had happened sooner." It includes fiction with science fiction, fantasy or horror themes. Medieval Steampunk: Speculative fiction set during the Middle Ages. Victorian Steampunk: A modern Science Fiction work (post-1930s) that is set in the early parts of the industrial revolution. Western Steampunk: Science fiction set in the American Old West. Industrial/Modern Steampunk: Science fiction taking place in the late industrial age, early modern age; i.e. World War 1, World War 2
Examples of steampunk: Wild Wild West, Final Fantasy 7, Van Helsing, The Time Machine, Hellboy, Sky Captain and the World of Tomorrow

The second most popular definition hits on several elements that are essential to a full understanding:

(contains) prominent elements of either science fiction or fantasy, such as fictional technological inventions like those found in the works of H. G. Wells and Jules Verne, or real technological developments like the computer occurring at an earlier date

Interestingly, in 2013 an IBM group's Social Sentiment Index prediction of cultural trends claimed that steampunk was soon to emerge as a mainstream pop culture force. E.g., see this blog post ... https://cultureby.com/2014/08/steampunk-cometh.html IBM was wrong as this Google Trends graphic based on steampunk as a keyword demonstrates: 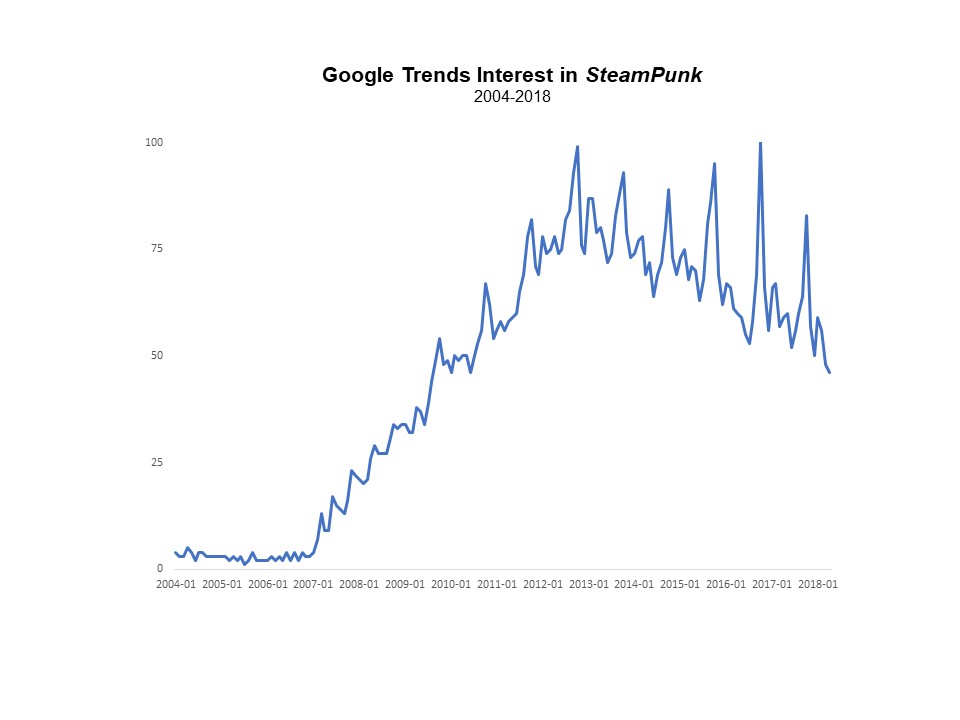 The metric spikes kind of cyclically around Halloween each year after 2013 but clearly shows a relentlessly downward trend.

That said there are more interesting examples in cultural production where steampunk aesthetics have played a role. These include:

Finally, there's this Youtube vi, What’s so punk about steampunk?

Not the answer you're looking for? Browse other questions tagged genre or ask your own question.

10
What is the difference between a philosophical novel and a novel of ideas?
6
What is the distinction between literature and genre? Is such a distinction useful?
4
What are genres? Are they a useful concept?
3
What genre did Arthur Hailey's works belong to?
6
What would a biography on an animal be called?
3
What is the genre after post-apocalypse?
5
What is the “uncanny” element of Gothic Literature?