What does "the protecting canvas unrolled from Gatsby’s grave" mean?

I am reading The Great Gatsby, and came to be curious as to what "the protecting canvas unrolled from Gatsby’s grave" means in the following sentences:

As we started through the gate into the cemetery I heard a car stop and then the sound of someone splashing after us over the soggy ground. I looked around. It was the man with owl-eyed glasses whom I had found marvelling over Gatsby’s books in the library one night three months before.

I’d never seen him since then. I don’t know how he knew about the funeral, or even his name. The rain poured down his thick glasses, and he took them off and wiped them to see the protecting canvas unrolled from Gatsby’s grave.

Only the narrator Nick, Gatsby's father, and a priest went to the cemetery where Gatsby was to be buried. However, as they went into the cemetery, a man came in, who turned out to be the man whom Nick met in one of Gatsby's parties.

In this part, I could not understand what was the "protecting canvas" and how it unrolled from Gatsby's grave. I guessed, since it was raining, the canvas cloth was covering the pit in which Gatsby was to be laid down. But as people arrived, the cloth was now "unrolled." So I wonder why it was described as the "protecting" canvas.

I would very much appreciate your help.

There's no great mystery to this: it literally means what it says.

Newly-dug graves are often covered with canvas to protect them from the rain. Otherwise, the dug earth would turn to mud. This is especially true before the coffin is lowered into the hole. Not only is the expanse of bare earth greater, but making the hole blend in with the green grass makes it less frightening and worrying for the mourners to behold. 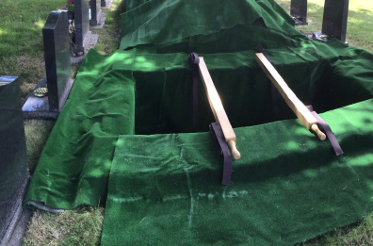 The rain poured down his thick glasses, and he took them off and wiped them to see the protecting canvas unrolled from Gatsby’s grave.

The canvas is being unrolled, presumably, so that the grave can be filled.