What's the significance of Faust's meeting being on Easter Day?

In Goethe's Faust, the eponymous (anti?)hero meets the demon Mephistopheles on what seems to be Easter Sunday, during local celebrations of Easter. Given the religious themes in the story, this surely can't be a coincidence.

Why is their meeting on Easter Day in particular? What symbolic significance does this have in terms of Faust's life and actions?

While Easter sure comes with a significant religious meaning, it seems to be distinctly its more earthly and mundane aspects that are emphasised in Faust. Though, the connections to resurrection aren't there for nothing either and surely intertwined with its less religious importance.

If we take a look at the situation when we're introduced to Easter, through the Easter bells ringing right when Faust is about to end his life, we see that Faust himself doesn't care too much about the religious aspects either, they only remind him of the experiences that are beyond his reach:

Rather than that, it makes him recall the memories of his youth, where he was still striving full of energy and free from the hopeless realization of scholarly impotence that he's facing now:

This relates back to his earlier mournings of reaching a dead end in his studies and in what we are able to learn and know. We see this also in his earlier conversation with his student Wagner, a "bookworm" par excellence, where he looks down cynically onto Wanger's optimism towards gaining knowledge from reading the thoughts of past researchers who came to the same hopeless realization that Faust is facing.

He basically has lost his will to strive and experience (and ultimately to live) for there is nothing to gain anymore, and the Easter bells are calling back that youthfull naiveté and optimism to some degree. And you'll notice how he says that it's "spring's idle holiday". It is the mundane qualities of Easter as a social holiday and the beginning of spring that calls him back to life, not the sublime religiosity that only proclaims spheres he can't and won't reach anyway.

This is strengthened by the following scene at the city gates, where we first see all kinds of merry folk going about their holiday business, as well as in the "Osterspaziergang", one of Faust's most famous monologues while he walks the streets with Wagner. It sets off by classic natural descriptions of spring's awakening and winter's retreat, while then juxtaposing that with the social awakening of civilization from winter's drabness: 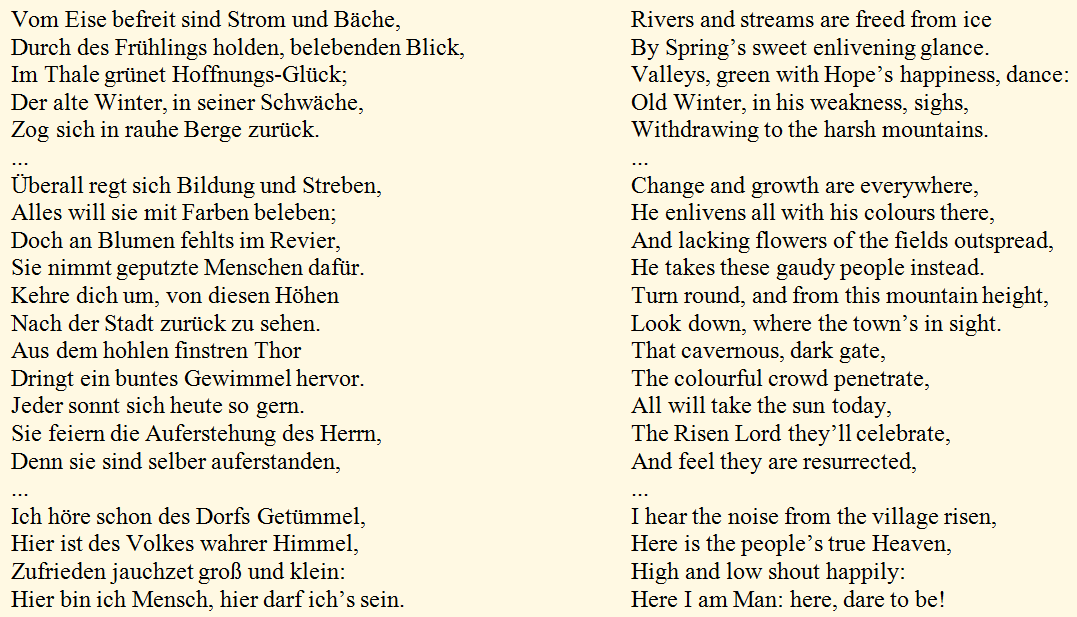 The same how spring reinvigorates nature as well as humanity, the same it reinvigorates some of Faust's life spirits, be it only the more mundane spirits realizing that there is more in life than just knowledge. This can be seen as well in relation to his ealier struggles that contrast the gaining of knowledge and ascension into higher spheres with his clinging to the enjoyment and experience of earthly life:

So to sum up, to me Easter here, by marking the return of spring as well as in its significance as a joyful holiday, serves as both a reinvigoration of Faust's spirits and his nature to strive as well as a reminder of the mundane qualities of life and the merits of experience and enjoyment contrasted to studying and book-based knowledge which Faust feels to have wasted his life on. And this in turn might just bring him into the proper mindset for a fruitful temptation by Mephisto.

I won't claim the above explanations to be the end of the story, though. I'm far from an expert on the topic and all that is based on a reread inspired by the question. I'm sure this has been studied time and time again and there might be more to Easter's significance under the hood. And even when seeing this angle of spring and revitalization, the connection to Christian resurrection isn't too hard to draw, in fact the very words of the work already do that (neither would the celebration of Jesus's resurrection at the very beginning of nature's be entirely coincidental in the first place).

The English translation presented here was taken from this site.

Not the answer you're looking for? Browse other questions tagged symbolism german-literature faust johann-wolfgang-von-goethe or ask your own question.

10
How many of the Songs of Innocence and of Experience come in pairs?