Is there a standard way to measure how influential a particular book is?

I got to thinking awhile back: many high-level politicians (such as Paul Ryan, current Speaker of the House in the U.S.), media figures, etc. cite Atlas Shrugged as a major influence. Then I got to thinking: has anyone actually tried to measure exactly how influential it is?

Has anyone come up with a quantitative measure of how influential particular books are? I assume that studies would study how be influential they are relative to something - for example, how influential something is in politics. Are there high-quality studies on this topic?

The answer to the question posed in your title is that there is not yet any standard way to measure 'influence.' The fact is that analyses of this type are a kind of wild, wild west where 'standard' methods have yet to develop.

Studies of this kind are a variant of computational humanities where the focus is on algorithmic text mining of large, unstructured databases. In literary humanities, Franco Moretti pioneered the use of statistical tools for this purpose. Moretti's at Stanford and has a group focused on 'distant reading' or 'quantitative formalism'. These methods are spreading widely throughout the academic world with many 'classically' trained, close readers objecting to their dissemination.

One quick way to get at least some insight into online usage of Atlas Shrugged is the Google Trends search tool. By querying the keyword 'Atlas Shrugged' for the US for the time span from 2004-2018, one can see that there was little interest in the book until April 2011, followed by a second spike in October 2012. 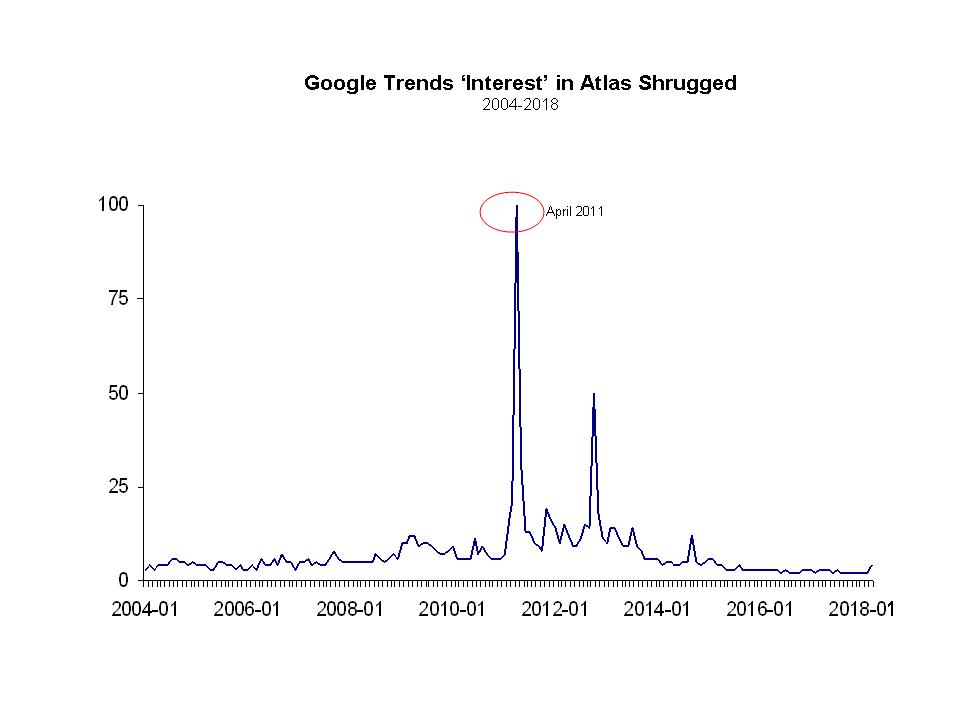 The metric displayed in the chart is described by Google as 'interest' but it's more accurately described as the ratio of keyword search activity divided by total search activity on Google. The weekly values that result are rescaled by dividing the weekly values by the maximum value for the time series. This creates the spike in April 2011 equalling 100%. That said this little analysis isn't very satisfying in that it only goes back to 2004 and is quite narrow in its specification. GT offers little by way of an explanation for these spikes in 'interest.'

A direct answer to your concern with the influence of Rand's book is a more complicated question that would have to include not just her book but the related influence of other libertarian or neo-liberal thinkers such as Friedrich Hayek, Milton Friedman, Alan Greenspan, and many more. In other words the answer to your second question is no, there are not yet any "high-quality studies on this topic," at least that I'm aware of.

However, there are "high-quality" studies done on other areas and aspects of text mining that could be brought to bear in addressing your specific question. For instance, this paper by Rule, et al., Lexical shifts, substantive changes, and continuity in State of the Union discourse, 1790â€“2014 does a wonderful job of analyzing the themes of the Presidential State of the Union addresses going all the way back to George Washington. The graphics are beautiful. This is the kind of work that could be brought to bear in answering your query.

Link to PDF of the paper: Rule, Alix; Cointet, Jean-Philippe; Bearman, Peter S.: Lexical shifts, substantive changes, and continuity in State of the Union discourse, 1790â€“2014, Proceedings of the National Academy of Sciences, 2015.

You've probably heard about the New York Times bestseller list, which measures how many copies of a book have been sold, which is a quantitative measurement that can be used to determine influence. So yes, people have used numeric measurements to determine the influence of books, and the use of these numbers goes well beyond academia.

The title of this question asks for a "standard way". A standard is just something that is agreed upon, and given how many people rely on the New York Times bestseller list, it surely is the answer to this question.

Not the answer you're looking for? Browse other questions tagged sociology-of-literature or ask your own question.