Why is “Oranges and Lemons” supposed to describe child sacrifice?

Oranges and lemons, Say the bells of St. Clement’s.

You owe me five farthings, Say the bells of St. Martin’s.

When will you pay me? Say the bells of Old Bailey.

When I grow rich, Say the bells of Shoreditch.

When will that be? Say the bells of Stepney.

I do not know, Says the great bell of Bow.

Has apparently a darker meaning:

Various theories have been advanced to account for the rhyme, including: that it deals with child sacrifice; that it describes public executions; and that it describes Henry VIII’s marital difficulties. Problematically for these theories the last two lines, with their different metre, do not appear in the earlier recorded versions of the rhyme. source

While I can understand the public execution theory:

The gaol stood on the current site of the Old Bailey, next to St Sepulchre’s church (the bells of Old Bailey in the rhyme). The sound of that church’s “great” tenor bell striking 9am on a Monday morning would signal the start of any hangings due to take place that week. The prisoners on death row were visited the night before by the bell man of St Sepulchre, who would hold a candle in one hand and ring the execution bell in the other. ibid

I have problems understanding why this would suggest child sacrifice, something that would be abhorrent in XVII century Europe and probably not heard of since the fall of the pre-Columbian Aztec empire.

Was it just meant to be a simple scary story, beware of the boogeyman?

TL;DR: There is no hidden meaning in ‘Oranges and Lemons’.

The problem with all the theories about a hidden meaning in ‘Oranges and Lemons’ is that the earliest printed versions do not contain the “chopper” lines. The verse first appeared in print in Tommy Thumb’s Pretty Song Book (1744); I can’t find a facsimile of the original, but archive.org has a reprint from 1815 which has the same text (but with differences in spelling and punctuation): 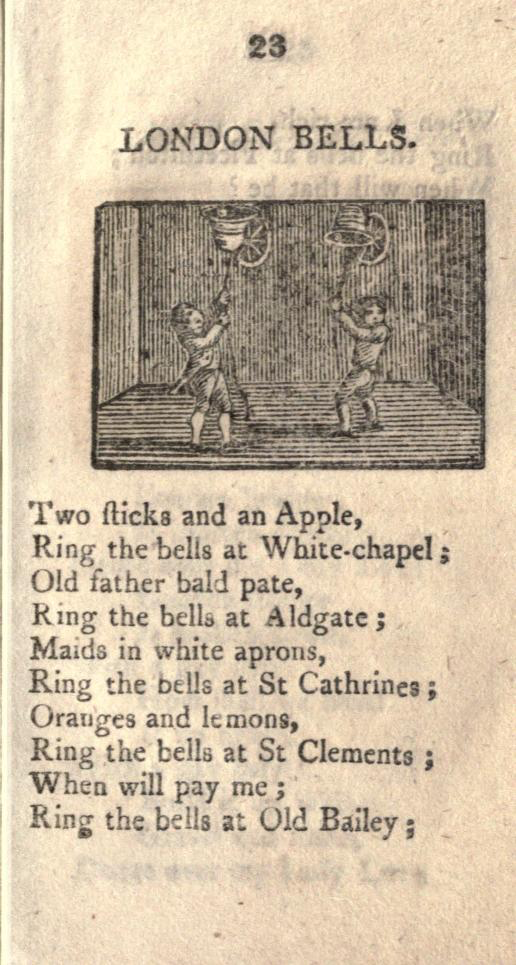 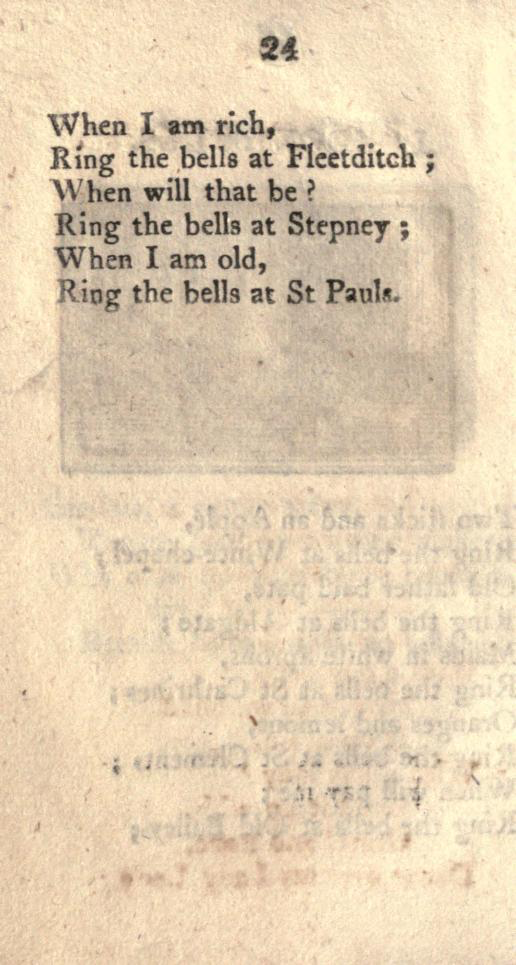 (“When will pay me” must be a misprint for “When will you pay me”.)

The earliest instance of the “chopper” lines that I can find is from James Orchard Halliwell’s The nursery rhymes of England, collected chiefly from oral tradition (1842). Google Books has the fifth edition (1853). 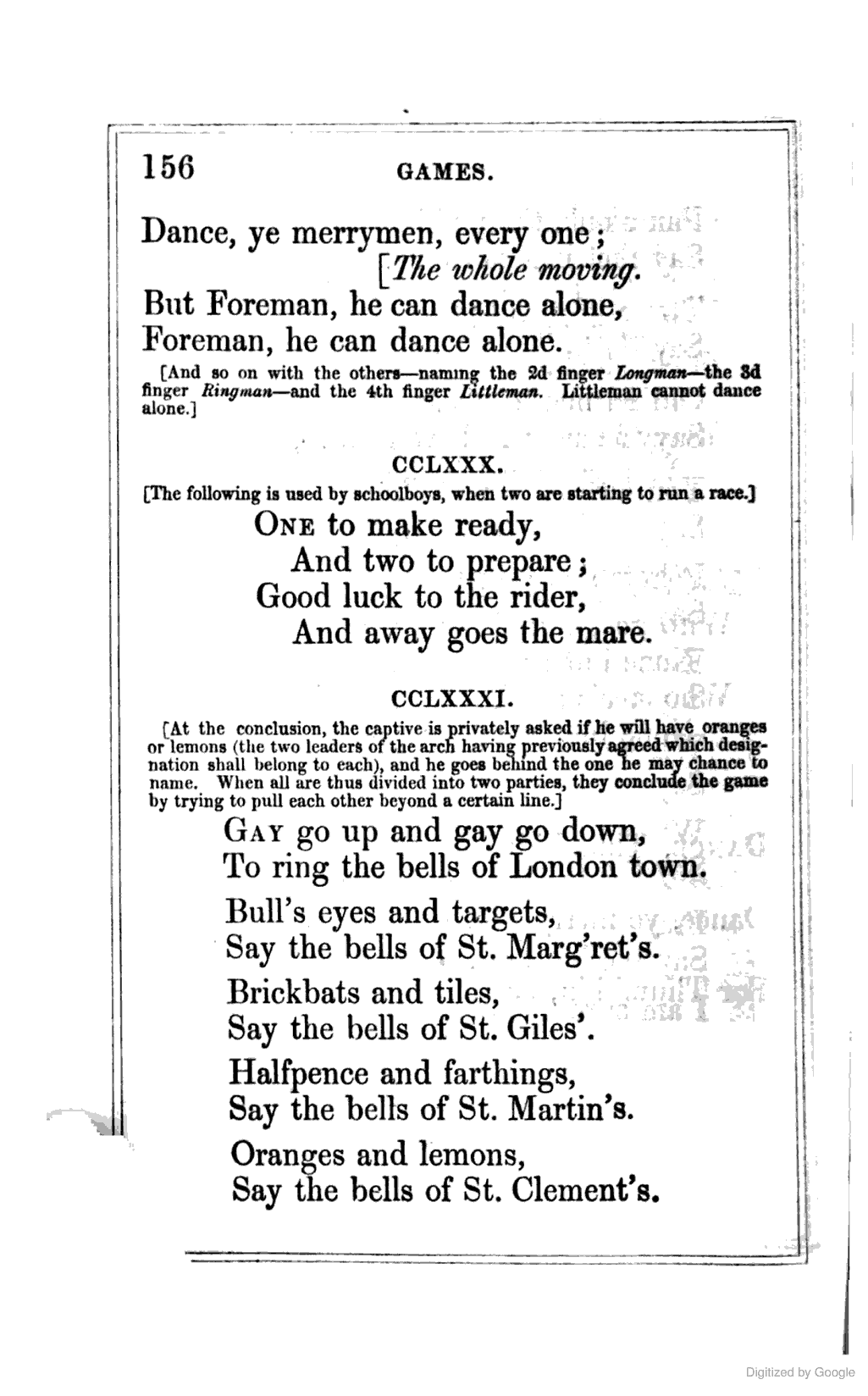 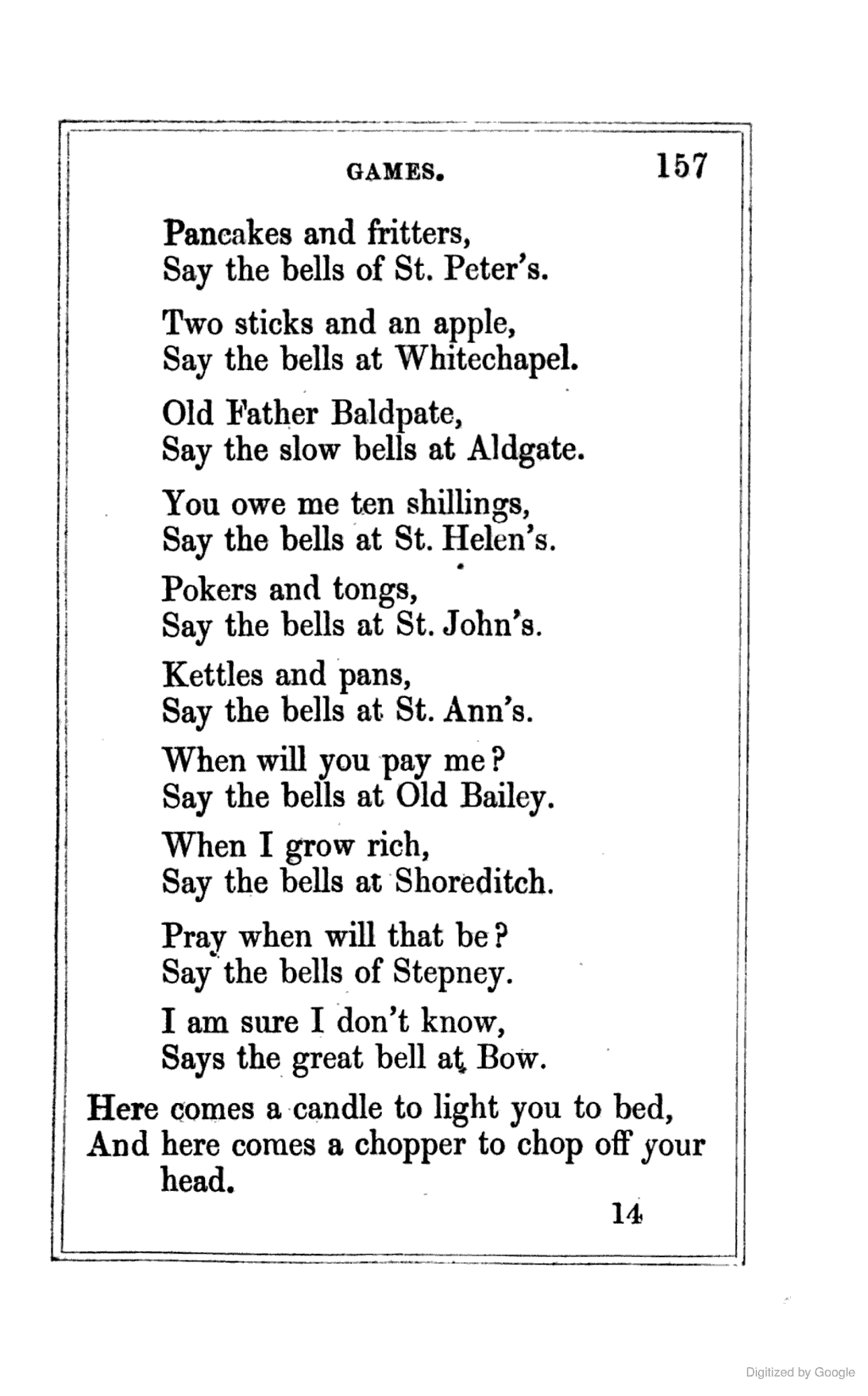 [At the conclusion, the captive is privately asked if he will have oranges or lemons (the two leaders of the arch having previously agreed which designation shall belong to each), and he goes behind the one he may chance to name. When all are thus divided into two parties, they conclude the game by trying to pull each other beyond a certain line.]

(See below for a clearer description of the children’s game somewhat inadequately described in the bracketed paragraph.)

Comparing this version with the 1744 version reveals typical signs of oral transmission and improvement: ‘ring’ has been replaced throughout with ‘say’, which better suits the metre; the word ‘slow’ has been inserted into the Aldgate line to improve the rhythm; the archaic reference to Fleetditch (which had been culverted in the mid-18th century) has been replaced by Shoreditch, and the poor rhyme ‘old’/‘Pauls’ has been replaced by the perfect rhyme ‘know’/‘Bow’.

Volume 9 of Charles Dickens’ magazine Household Words (1851) printed a piece ‘A Witch in the Nursery’ commenting (I think humorously or sardonically) on the imagery of children’s rhymes:

The cruel and unprincipled things sung or said to young children in so many of our popular nursery rhymes and tales, the wanton, reckless acts, no less than abominable reasons adduced for them, or consequences drawn from them, are something quite surprising. […]

A few off-hand murders “for tiny hands” are all we will offer […] The four next, all of which we find in Halliwell’s Collection, are more practically hideous than we were previously aware our nursery literature, rich as we knew it to be in these things, could furnish:—

Volume 45 of Fraser’s Magazine (1852) printed ‘Nusery Literature’, a reply to the Household Words piece. This piece shows that the rhyme was well-known in England in the early-to-mid 19th century, and it describes the kind of game that children might have played with the use of the rhyme.

We are told that the direct tendency of the nursery rhymes is to pervert and destroy the innocence and generosity of childhood, to foster violence, and to encourage wanton and reckless cruelty, killing, theft, and greed. To make out this case, a vast number of verses are quoted, which make up an imposing array of horrors and improprieties very likely to bring our old friends into unmerited disrepute. Most of these purport to be taken from Halliwell. We have in our possession the authentic edition of Halliwell’s collection, published by the Percy Society, and not one half of the jingles cited are to be found there; neither are they in Bitson’s collection, called Gammer Gurton’s Garland, still less in Mother Goose’s Melodies, which is the oldest and most genuine of all, containing only rhymes and ditties in circulation all over England, while the collections of Ritson and Halliwell comprise many of merely local interest. The censured ditties which are to be found in any of the three authorities above mentioned are invariably misunderstood and misrepresented — rhymes, reflections, games, tales, and riddles being jumbled together without explanation : so that lines, sentences, and couplets, being respectively isolated from the context, present images as unlike their real appearance as do the moon and the ocean in the hands of a subjective cockney poet. For instance,—

is given as a solitary couplet of exceeding ‘practical hideousness,’ whereas, as every schoolboy knows, these two lines belong to the middle of the game called ‘Oranges and Lemons,’ in which every individual of the company is elected to belong to one of two parties by means of a compulsory process not very remote from that liberty of choice which is usually enjoyed by the fighting champions of mighty chiefs. The two children who represent the leaders form an arch with united and upraised arms, under which the others pass in a string, the last being taken prisoner by the down-dropping arms which encircle his neck while the lines are repeated, and the captive makes choice of one of the two parties. When the whole are disposed of in this manner, the two parties form, and the second division of the game proceeds.

The Fraser’s writer knew the “chopper” lines only in the context of ‘Oranges and Lemons’. But if they had previously been a “solitary couplet”, or part of some other verse, then their use in the children’s game would explain how they became attached to ‘Oranges and Lemons’.

But this is just speculation: children’s games and oral transmission don’t leave much in the way of written evidence, so it is impossible to know with any certainty how it happened.

Not the answer you're looking for? Browse other questions tagged historical-context nursery-rhyme or ask your own question.

9
Why are there so many references to Moneylenders and Jews in 19th century fiction?
5
Why are the names Rumi and Mevlana respectively used for the famous poet?
5
In Les Miserables, why can Javert be the judge of Fantine and why does Monsieur Madeleine have the power to stop him?