Book involving the apprentice of a ranger who fixes a dented canteen with swollen grain, learns to use that to break gates

I was reminded of this when I ran into the Ranger's Apprentice series while researching another book. It was a fantasy book, I think, that I read in early college, around 1999, in English, maybe as a paperback. The main character winds up as the apprentice to a forest ranger of some flavor. At some point, a metal canteen becomes horribly dented (maybe during a fight?) and the ranger fixes it by filling the canteen with grain and then adding water before capping it. The expanding grain causes the dents in the canteen to be pushed out. Said ranger later dies, although I don't remember if it was from wounds in battle, or from disease or old age (although for some reason, my brain keeps coming back to the idea of him dying of rabies after being wounded subduing an animal with the disease). Later, the protagonist is with a group that's trying to get into a city which is walled and locked up. He convinces them to follow his plan, which involves wedging two nested pipes into the doorway of the gate into the city, which are filled with soaked grain, the idea being that the expansion will cause the pipes to push out with great force, breaking the gates. They plant the devices, with some losses, and at first, it looks like the devices are doing nothing, and the loss was for naught, but then they start working and break the gates.

I am not 100% certain that it was a fantasy series now that I think about it. I think the mentor was indeed described as a "ranger", and I have a hazy memory of orcs and a darkness spell, but I might be channeling Mooshie from the Drizz't books.

The only other things I remember was an early scene involving a religious order where a religious brother tried to convince one of the nuns that semen was liquid communion, and some other scene involving the main character "curing" an epileptic through sex, only to see them get into an honor battle and having their head smashed in.

This is indeed Gary Jenning's Raptor and therefore neither Fantasy nor Sci-Fi. 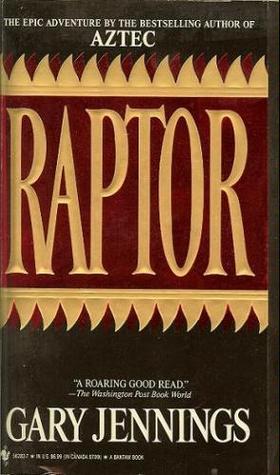 Raptor is an historical novel set in the late fifth and early sixth centuries. It purports to be the memoirs of an Ostrogoth, Thorn, who has a secret: he is a hermaphrodite and takes on the name, "Thorn the Mannamavi", "a being uninhibited by conscience, compassion, remorse- a being as implacably amoral as the juika-bloth and every other raptor on this earth." Thorn discovers his sexuality rather unorthodoxly during his early teens. After he is banished from both a monastery and, later, a convent, he travels throughout the dying Roman Empire on a quest to meet his fellow Ostrogoths (even though it was never confirmed that Thorn was an Ostrogoth; he simply assumed it by reaching several logical conclusions), meeting several characters; among the most crucial to the storyline: Theodoric and the retired Roman legionary-turned-woodsman Wyrd, with whom he forms close friendships.

Thorn lives his life chiefly as a man but can easily pass for a woman (he is beardless, has shoulder-length hair, and is relatively small-statured), and he uses this ambiguity for his own benefit. Throughout his life, Thorn conducts affairs with both men and women.

Wyrd is the "ranger" who is never referred to as such, but simply as a woodsman. He does die of what sounds like rabies (hundswoths or "dog-madness" in the book). There is the scene with the canteen:

.... What did get hurt was my handsome leather-and-tin water flask — a deep dent that nearly bent it double — and I was inconsolable at having clumsily damaged that gift of great value and utility. But Wyrd told me:
"Do not grieve so, urchin. While I am skinning and brittling this fine doe for our meal, you go and thresh the bushes and grasses roundabout for every kind of seed you can collect."

When I returned, holding my smock hem up for a hamper, and with it full of assorted seeds, he said:
"Pour them into the dented flask, as full as it will hold. Now take this" — he handed me his own flask — "and pour water in, to the brim. Now cork the flask as tightly as you can and put it aside and forget it"...

... But while Wyrd and I were still gobbling and slurping, I heard a distinct popping noise from the direction of my unrolled blankets. I went to look, and found that my flask was unbent and undented and, except for a slight scuff on the leather binding, as good as new.

And the scene where the same principle is used to break a gate:

.... The unearthly air-quivering noise was coming from the gate itself, for it was being strained and imperceptibly deformed at every point where I and my men had inserted a container, and it was loudly complaining in its agony. The keening now became mixed with other noises: the groans of stubborn old wood being bent, the splinterings of overstressed wood giving way, the screeches of spikes and bolts being twisted....

Thorn does grow up in a monastery where they are sexually assaulted by one of the brothers, who does make the analogy of semen to "liquid communion". Gudinand is the lover who suffers from epilepsy and dies during a duel with staffs (he's winning until he suffers from his fit, not due to stress but from the joy of nearly winning), unable to mount a defense or even raise his finger to beg for mercy.

7
What book has monsters that disguise themselves as black tire chunks on the sides of roads?
10
Book about a boy who develops several accidentally destructive science projects
4
Book about "lesser" and "greater" magic, with main protagonist who learns both?
13
Postmodernist fantasy with nested stories structure
2
Novel with a spy/assassin who helps the grand-daughter of a Nazi hunter, speaks Basque from learning it from a book, escapes a cave through water
4
Humorous novel about a man in a religious order who is sent into the outside world by his order, and has his worldview changed by his experiences