What does “in the Ring” mean in “Because I could not stop for Death”?

I've heard of attempts justifying an allegory to the nursery rhyme "Ring a Ring o' Roses", referring to the Great Plague (I am not convinced). In constrast, an article "Where children strove at recess" by David Leverenz treats this as a kind of confinement: 'inorganic ring of the setting sun' and 'my perspectives need a wider ring than the psychoanalytical schoolyard offers'. Some other interpretations I found were:

'through the cycle of their existence, "in a ring"' - Richard Chase
'absorbed 'in the Ring' of childhood's games' - Charles R. Anderson
...

I found these interpretations at Modern American Poetry.

What are some ways to weigh the possibilities and pin down the exact meaning and effective consequences of the usage of this?

This line is well known as a crux. But is it difficult, or just ambiguous? Ambiguity is ubiquitous in Dickinson’s poems, as she herself points out:

So trying to “pin down the exact meaning”, as suggested in the question, is going to fail from time to time, and this seems to be one of those times. So you have to consider the range of possibilities, the ‘Windows’ and ‘Doors’ of the line, as it were, and see where they lead.

There are several possibilities for the meaning of ‘Ring’, considered literally as a space for children to strive in:

13.a. A circle or circular group of people; spec. a circle of people in a dance.

17.a. An enclosed usually circular space within which some sport, performance, exhibition, or competition takes place.

18.a. A space, originally defined by a circle of spectators, for a boxing match, wrestling match, etc.

Considering ‘Ring’ as a symbol or metaphor, we can find many more meanings: the circle of friends, the arena of human competition, the prison-yard of society, the circle of the sun around the sky, the cycle of existence, the carriage-wheels of death, the danse macabre, and so on.

There’s a metaphorical sense of ‘Recess’ too, because as well as a break in a school-day it is also “an act of withdrawing from society, public life” (OED) as the speaker is doing in the poem.

The line has an interesting history. Here’s the manuscript of the stanza, courtesy of the Emily Dickinson Archive. (I’ve thresholded the image to improve the contrast. Click for a larger version.) 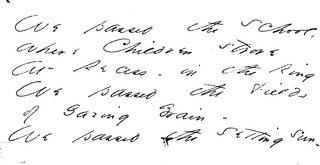 This is usually transcribed as in the question. But in the poem’s first publication in 1890, under the editorial title ‘The Chariot’, the stanza reads as follows (differences in wording in bold):

We pass the school where children played,
Their lessons scarcely done;
We passed the field of gazing grain,
We passed the setting sun.

Todd and Higginson say in their introduction, that the poems “are here published as they were written, with very few and superficial changes; although it is fair to say that the titles have been assigned, almost invariably, by the editors.” The changes here are hardly ‘superficial’, but you can see why they did it: the majority of the stanzas in the poem have a rhyme or assonance in the second and fourth lines, so why not this one? It is the same approach that led them to regularize Dickinson’s manuscript dashes into more conventional stops.

The change here seems to be motivated by a desire to resolve the ambiguity of ‘Ring’ one way or another.

This interpretation was first put forth by George Monteiro:

To take up the second matter first, it seems to me that the narrator has noticed that the children out in the schoolyard have so set themselves as to form a ring. They are thus engaged, I would suggest, in some form of organized activity—most likely, a familiar game. My hunch is that their game is the one called “Ring-a-ring-a-roses.” This venerable game, as everyone knows, involves two or more children holding hands and forming a “ring” that then moves in a circle, while its individual members recite a rhyme […]

In some form or other, this rhyme dates from the middle ages. It has been suggested that originally it was recited by children who performed the ritual of circling and falling down as an exercise in exorcism or as a charm against the ravages of the plague. […]

It is small wonder, then—to turn to the first matter—that the narrator of the poem sees the children’s activity in the ring, not as “play,” but as “strife.” For indeed, imbedded in their ritualistic game is a reminder of the mortal stakes that the poet talks about elsewhere.

This is an ingenious interpretation but it is built on a foundation of nonsense:

The legend linking the plague with the game-song seems in fact to be comparatively new. It was not given by Alice Gomme in 1898, who would certainly have mentioned it had she known it; and has not been found in the work of any commentator before the Second World War, although—under the protection of The Golden Bough—the mythologists were not wanting in fancifulness. […]

The association of the plague with ‘Ring a Ring o’ Roses’ looks even more improbable when the history of the game itself is exampled. Alice Gomme’s failure to devolve it from Stuart times is commendable, seeing that, when she was writing [that is, in 1898], the game had not been on record in England for more than twenty years.

Not the answer you're looking for? Browse other questions tagged poetry symbolism emily-dickinson or ask your own question.

11
What does the “good night” symbolize in Dylan Thomas's “Do not go gentle into that good night”?
6
What does “the sad height” represent in “Do not go gentle into that good night” by Dylan Thomas?
15
What does 'Gilead' mean in The Raven?
13
What does “The Edge of Doom” mean?
14
What does the raven symbolize (besides death)?
1
What does this 'Each that we lose takes part of us' quote from Emily Dickinson mean?
2
What does “contention-tost” mean?
7
What is the symbolism of Eustace's arm ring?
7
Who wrote the poem that begins “What have we not done for this country”?
0
How can “Death be not proud” be related to the areas of exploration?