Where was the Odyssean Ithaca?

It's well known that the home of Odysseus, as described in Homer's Odyssey, was the island of Ithaca. There's a modern-day Greek island called Ithaca, and according to Wikipedia:

Modern Ithaca is generally identified with Homer's Ithaca, the home of Odysseus, whose delayed return to the island is the Odyssey's plot.

However, I recently heard a conflicting theory which says that the Odyssean Ithaca was actually an island in what's now Croatia. I'm interested to know the evidence for both (or any other) theories, based on the description of Ithaca in the Iliad and Odyssey.

TL;DR: Homer’s Ithaca is somewhere in the Ionian islands but his descriptions are hard to reconcile, so pending a really convincing archaeological find it is impossible to be sure how the descriptions relate to reality.

Why do we think there might be a real ‘Ithaca’?

An important first question, one that is often neglected, do we have any reason to expect the ‘Ithaca’ in the Odyssey to correspond to any real place? The Odyssey is full of characters and incidents that are obviously fictional: gods, cyclopes, sea monsters, sailors transformed into swine, and so on. Is there any reason to suspect the existence of a foundation of history under the superstructure of legend? We don’t want to be in the position of hunting for the island of Lilliput (no matter if it is described as being “north-west of Van Diemen’s Land”, at a latitude of 30° 2′ S).

Here’s a brief summary of some of the evidence for the historicity of Homer’s works. I’ll write ‘Homer’ as a shorthand for whoever put the poems into the form in which they were written down, some time in the 8th century BCE, without taking a position on exactly how this happened.

What evidence can we expect?

I’ve gone into the question of historicity in such detail in order to show what kind of evidence we might expect to find: Homer might have had personal knowledge of the location and physical geography of Ithaca, or been able to draw on a tradition that described it.

However, an important difficulty is that the exact meaning of the text is hard to determine. The language is poetic, allusive, and archaic. A particularly important and troublesome case is Odyssey 9.25–6:

Here χθαμαλὴ seems to mean ‘near the ground’; πανυπερτάτη ‘highest/furthest of all’; and πρὸς ζόφον ‘towards the dark’, that is, to the west (as opposed to πρὸς ἠῶ ‘toward the dawn’ meaning ‘east’). This troubled the geographer Strabo in the first century BCE; in Geography 10.12 he wrote:

But this line seems to imply some contradiction; for χθαμαλὴ is low, and depressed, but πανυπερτάτη expresses great height, as he describes it in other passages […] The expression does imply contradictions, which admit however of some explanation. They do not understand χθαμαλὴ to signify in that place ‘low’, but its contiguity to the continent, to which it approaches very close; nor by πανυπερτάτη great elevation, but the farthest advance towards darkness, (πρὸς ζόφον), that is, placed towards the north more than all the other islands, for this is what the poet means by ‘towards darkness’, the contrary to which is towards the south (πρὸς νότον).

But this interpretation of the text seems very strained, presumably to fit with Strabo’s knowledge of the actual geography of Ithaca; a plainer reading of Homer would be that Ithaca lies low to the sea and furthest to the west.

This issue is ubiquitous when trying to resolve Homer’s descriptions: there is a great deal of difficulty just in interpreting the text.

What does Homer say about Ithaca?

These extracts are from the translations by A. T. Murray, via the Perseus Digital Library.

Iliad 2.631–7: And Odysseus led the great-souled Cephallenians that held Ithaca and Neritum, covered with waving forests, and that dwelt in Crocyleia and rugged Aegilips; and them that held Zacynthus, and that dwelt about Samos, and held the mainland and dwelt on the shores over against the isles. Of these was Odysseus captain, the peer of Zeus in counsel.

In the Odyssey Ithaca is frequently given the epithets ἀμφίαλος (ἀμφί = around; αλος = sea; Murray uses ‘sea-girt’); τρηχείης (jagged or rugged); and εὐδείελος (clear or distinct, perhaps because it is visible from afar).

Odyssey 3.81: We have come from Ithaca that is below Neion

Od. 4.605–8: But in Ithaca there are no widespread courses nor aught of meadow-land. It is a pasture-land of goats and pleasanter than one that pastures horses. For not one of the islands that lean upon the sea is fit for driving horses, or rich in meadows, and Ithaca least of all.

Od. 4.670–1: I may watch in ambush for him as he passes in the strait between Ithaca and rugged Samos.

Od. 4.844–6: There is a rocky isle in the midst of the sea, midway between Ithaca and rugged Samos, Asteris, of no great size, but therein is a harbor where ships may lie, with an entrance on either side.*

* The text has ἀμφίδυμοι (double); some translators prefer this to mean that there were two harbours, rather than one harbour with two entrances.

Od. 9.21–9: But I dwell in clear-seen Ithaca, wherein is a mountain, Neriton, covered with waving forests, conspicuous from afar; and round it lie many isles hard by one another, Dulichium, and Same, and wooded Zacynthus. Ithaca itself lies close in to the mainland* the furthest toward the gloom, but the others lie apart toward the Dawn and the sun—a rugged isle, but a good nurse of young men; and for myself no other thing can I see sweeter than one's own land.

Od. 13.96–114: There is in the land of Ithaca a certain harbor of Phorcys, the old man of the sea, and at its mouth two projecting headlands sheer to seaward, but sloping down on the side toward the harbor. These keep back the great waves raised by heavy winds without, but within the benched ships lie unmoored when they have reached the point of anchorage. At the head of the harbor is a long-leafed olive tree, and near it a pleasant, shadowy cave sacred to the nymphs that are called Naiads. […] Two doors there are to the cave, one toward the North Wind, by which men go down, but that toward the South Wind is sacred, nor do men enter thereby; it is the way of the immortals.

Od. 13.344–51: But come, I will shew thee the land of Ithaca, that thou mayest be sure. This is the harbor of Phorcys, the old man of the sea, and here at the head of the harbor is the long-leafed olive tree, and near it is the pleasant, shadowy cave, sacred to the nymphs that are called Naiads. This, thou must know, is the vaulted cave in which thou wast wont to offer to the nymphs many hecatombs that bring fulfillment; and yonder is Mount Neriton, clothed with its forests.

Hymn to Apollo 422–9: So the ship ran on its course and came to Arena and lovely Argyphea and Thryon, the ford of Alpheus, and well-placed Aepy and sandy Pylos and the men of Pylos; past Cruni it went and Chalcis and past Dyme and fair Elis, where the Epei rule. And at the time when she was making for Pherae, exulting in the breeze from Zeus, there appeared to them below the clouds the steep mountain of Ithaca, and Dulichium and Same and wooded Zacynthus.

This discrepancy has troubled the readers of Homer for a long time. Strabo wrote:

Asteria, called by Homer Asteris, is no longer what it was. There is no good anchorage there now. Neither is there in Ithaca the cavern, nor yet the temple of the nymphs described to us by Homer. It seems more correct to attribute this to change having come over the places, than either to the ignorance or the romancing of the poet. This however, being uncertain, must be left to every man’s opinion.

What are the possibilities?

Homer clearly indicates that Ithaca is one of a group of four islands; the others being Dulichium, Same (or Samos), and Zacynthus. This quartet of names repeatedly occur together: I quoted 9.21 above, but there’s also the following formula:

Od. 1.245: For all the princes who hold sway over the islands—Dulichium and Same and wooded Zacynthus—and those who lord it over rocky Ithaca, all these woo my mother and lay waste my house.

These four islands are close to Elis (according to the Hymn to Apollo) and to Nestor’s palace at Pylos (according to the description of Telemachus’ voyage); and so must be the Ionian islands. In my opinion other candidates (suggestions have included Spain, Sicily, and the Baltic!) require doing far too much violence to the clear meaning of the text.

There are five large islands in the Ionian: Corfu, Lefkada, Cephalonia, Ithaca, and Zakynthos. 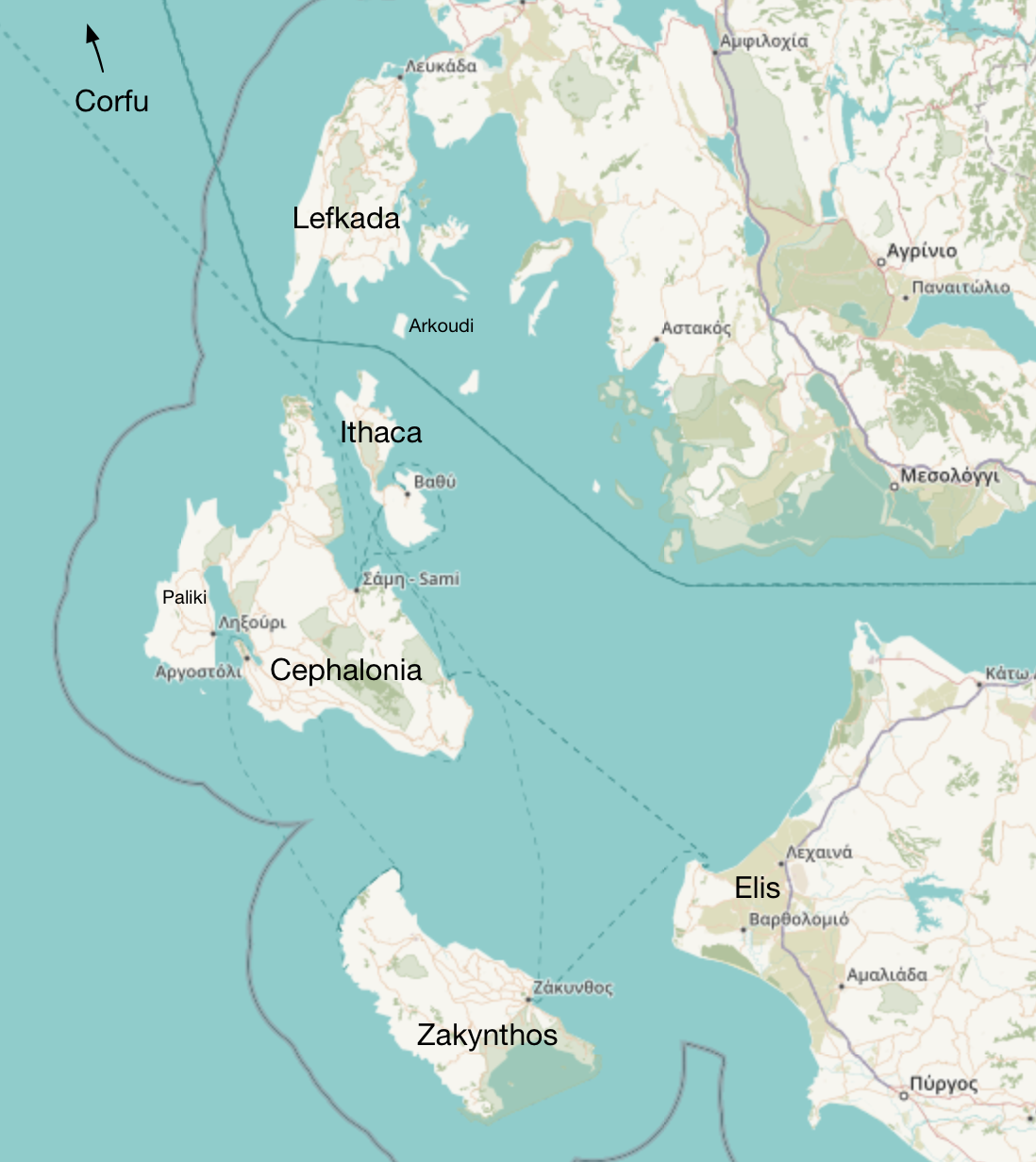 Everyone agrees that Zacynthus = Zakynthos, but how do the others correspond? The problem here is that Homer’s specifications are hard to reconcile:

There have been many attempts to resolve these contradictory descriptions; I consulted the following when writing this answer:

None of them convinced me that they had really solved all these points. Fraser has Ithaca = Cephalonia; Dulichium = Corfu; Same = Lefkada and Asteris = Ithaca, but doesn’t explain points 1, 4 or 6. Bittlestone suggests that the Paliki peninsula on Cephalonia was formerly a separate island, but that earthquakes and uplift have since joined them, thus allowing Paliki = Ithaca, satisfying the ‘furthest west’ description, but this doesn’t explain points 4 or 5: if Paliki is Ithaca, then there are no plausible candidates for Asteris.

It seems most likely to me that Homer made a mistake somewhere, or that his interpreters have failed to get at the intended meaning.

In my recently published book "In the Shadow" I provide adequate (I believe) evidence that Homeric Ithaca is today's island of Faial in the Azores. The surrounding islands are identified as shown on the map. 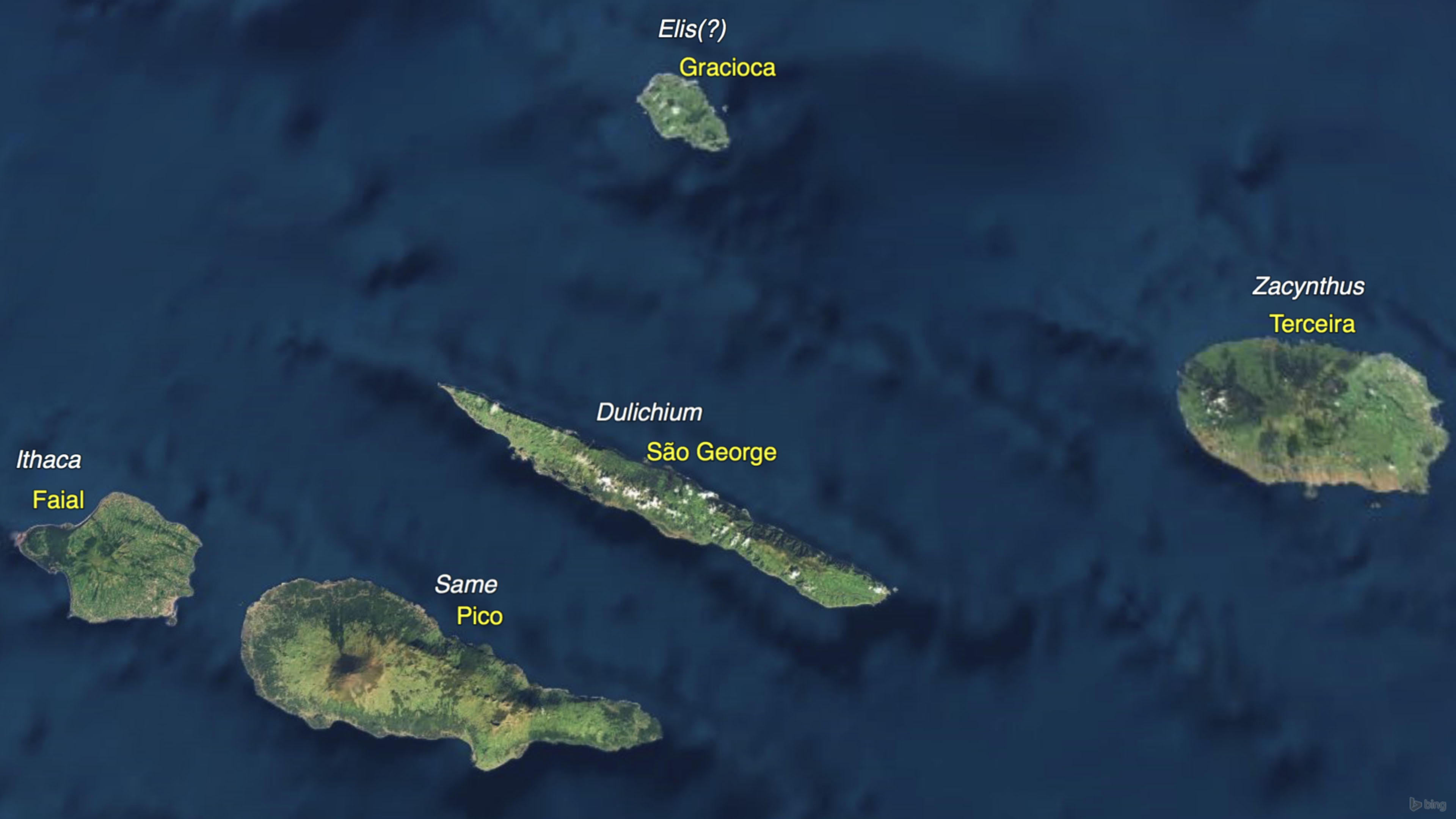 An animated video of the whole trip of Odysseus is provided here https://www.youtube.com/watch?v=FCHUG0PpR5M&t=16s

Not the answer you're looking for? Browse other questions tagged greek-literature setting homer the-odyssey or ask your own question.

14
Did Homer base the Iliad and the Odyssey on mythology?