Why is the robin “sobbing”?

Blake's "The Blossom", part of his Songs of Innocence which you can read online, is a very short poem about a sparrow and a robin. The part about the robin reads as follows:

Why is the robin "sobbing"? Apart from that it (almost) rhymes with "robin", of course. Do the birds in this poem symbolise something else, perhaps something human? The part about a "cradle narrow" made me think of a baby, which could also fit with "sobbing", but then what's the difference between the sparrow and the robin - do they symbolise two different babies, or what?

Executive summary: the sparrow is the lover, and the robin is the child [thank you @PeterShor for cutting through the undergrowth]. Which might well invalidate my interpretation below :o)

If you go here you'll find a link to a sample of robin birdsong, with the narration [emphasis mine]:

Unusually among British birds, both male and female robins sing. The Spring song is a rich warble which fades quickly, but in Autumn it becomes wistful and rather sad, and is often the only birdsong you’ll hear on cold, foggy Autumn evenings. Robins regularly sing at night, especially under streetlamps.

What's the difference between the sparrow and the robin?

It seems likely Blake's intent was to show how two people in apparently identical circumstances can seem very happy or very sad. Given the odesmith’s approach to life, the title of the collection, and the context (a lot of relatively “clean” sexual imagery exists in the rest of the poems) this may be contrasting blithe, naïve, youthful spirits with sad and wiser men like Coleridge’s wedding guest. Nowadays we might call the latter jaded.

Comparison with The Clod and the Pebble.

This may be compared with its companion poem, The Clod and the Pebble, which also illustrates two opposing responses to the world and to “love” in particular. I think that case is slightly different, largely because it’s clearer there why the responses are different. The clod speaks of what the Greeks¹ termed agápē (ἀγάπη), and the pebble of what they dubbed érōs (ἔρως), but the pebble deprecates the latter by implying it is selfish.

a.k.a. remember please always to call it “research”.

At one end of the spectrum are the rather down-to-earth views of the poem’s imagery (the whole natural cycle-of-life thing, with commentators varying in their perceptions of how full the glass is).

For example, a description of the poem on a popular Cliff's Notes–style website says

The poem hides a secret cynicism about nature.
[…]
Whether a sparrow finds a home in its branches or a robin weeps, the tree, or specifically its blossom, is indifferent and merely looks on. Blake’s view of nature here is of a material world, operating on materialistic principles, with no vital essence to give it personality or feeling.

Whereas, for example, The Cambridge History of English Literature (though it refers to The Blossom merely in passing) has this to say:

Every other instance shows sorrow and difficulty to be but occasions for the immediate manifestation of sympathy. God, as the tender Father, the angels, the shepherd, the mother, the nurse, or even the humbler forms of insect and flower, as in The Blossom, or A Dream, — all are expressions of the same universal ethic of love.

In other words, a celebration of that ethic, rather than cynicism.

This blog post suggests a rather more “adult” reading:

Upon first reading, I got the sense of sexual symbolism here. I asked myself if I was maybe reading too much into the poem, but after reading it over a couple more times, the imagery became stronger and I definitely concluded that Blake was expressing sexuality, particularly the loss of virginity.

He goes on to point out the obvious imagery in the arrow and cradle narrow.

At the more spiritual, symbolic, ethereal, wispy end of the spectrum, we have this article from the now-defunct Colby Quarterly. It begins by lambasting the “sexual imagery” interpretation, with the scathing if somewhat pathetic critique:

FOR SEVERAL DECADES "The Blossom," from William Blake's Songs of Innocence, has been subject to a sexual interpretation, ….
…the poem presents an allegory of sexual intercourse, going "into considerable detail in presenting the sexual act and the sexual parts." Such a reading, however, does injustice to the breadth of Blake's vision; and as John Holloway has pointed out, "not only does it strike us, once we have deciphered it, as a ridiculous and unnecessary way of wrapping up something about 'sexual intimacy'; it is so particularly ridiculous as to be aware of the male sexual organ as a sort of pet."

and then continues to extol the naïve but sympathetic Madonna-with-child view of the piece:

The speaker in "The Blossom" is surely a mother with her child. In the foliage design a mother holds her child, madonna-like, and in some copies he is clearly nursing at her breast. She is given wings and, in at least one copy (Z), a halo². To see this madonna and child as a Cupid/Psyche couple in order to save the sexual interpretation seems a bit far-fetched.

I'll leave the Freudian interpretation of those authors’ apparent disgust of coitus to the reader³ ...

¹ C S Lewis used a selection of Greek words for “love” as the foundation for his book The Four Loves, and rebuts the criticism of ’erōs as a “selfish” love. It’s worth noting that he’s talking about romantic love rather than only sexual desire in general.
² Each poem was accompanied by rather elegant illustrations, mainly “nature-themed”. See below. Larger version here.
³ Where do they think the child came from? 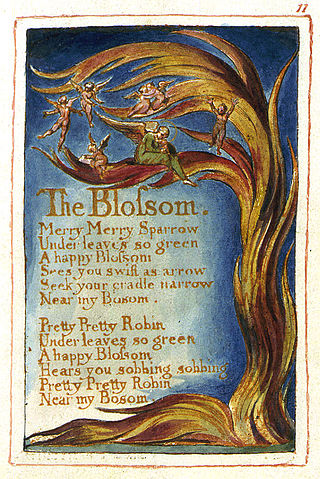 Not the answer you're looking for? Browse other questions tagged poetry symbolism william-blake songs-of-innocence or ask your own question.

10
How many of the Songs of Innocence and of Experience come in pairs?
6
Is the comparison in “The Clod and the Pebble” between different types of love?