What is the nature of the relationship between the Comtessa and the clay manservant?

I'm reading Fallen London, which is essentially a choose your own adventure story that you can read online. I've gotten to the story about the Comtessa, and I'm at a bit of a dilemma: 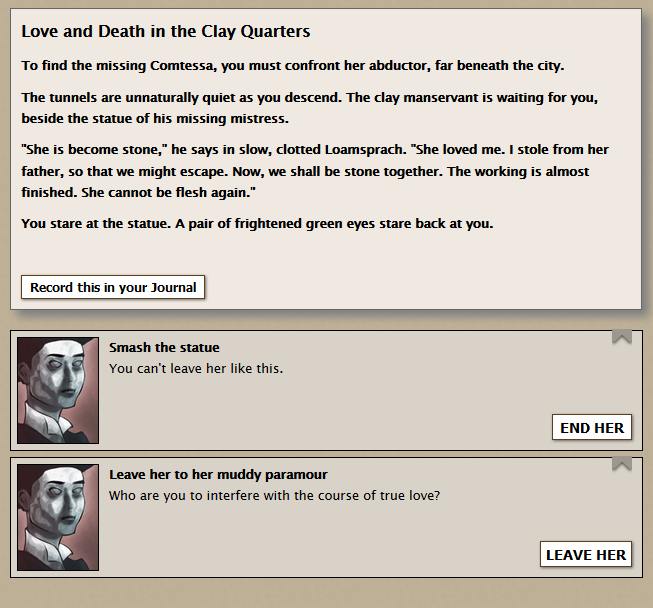 The text is a bit contradictory about the relationship between the two characters: on one the Comtessa's eyes are "frightened", but on the other hand their relationship is apparently "true love".

What is the nature of the relationship between the Comtessa and the clay manservant?

Perhaps deciding how to interpret their relationship is part of the choice you're making at this stage of the game.

As is common in literature, there appears to be more than one possible answer to your question, deriving from different but equally valid interpretations of the story. Because this is interactive fiction, your choice of interpretation may actually influence how the story develops.

It's up to you to decide whether their relationship is truly a loving one as the manservant claims, or something more sinister that needs to be ended. And that choice of interpretation is part of the game.

Shortly after this storylet was first released, there was a blogpost by the game's chief writer/designer, Alexis Kennedy, which sheds some light on the thinking behind the storylet. Kennedy says:

we define the resolution to the Comtessa’s story as a reflective choice. That is to say, it’s a choice you make based entirely on how you view your character, and what you think your character’s priorities are. To make the decision, you first have to decide what kind of decision you want to see it as.... This storylet invites the player to play God for a moment. And that’s why I think the two choices work: because either one of them could be humane or cruel or lazy or greedy or spiteful or generous or whatever you feel, and what the player does is decide their motivation and then pick the option they think fits it. There is no ‘right’ or ‘wrong’ and there is no ‘correct’ or ‘incorrect’ either.... there’s a pseudo-tragic thing going on here in that both choices, kill her or leave her, are nasty, both feel extreme and both feel like sacrifice.... The game won’t tell you your motivation – but you need to have one.

Essentially, the Comtessa's situation is designed to be ambiguous, and the purpose of the storylet is to force you to make a decision based on inadequate evidence, purely as a reflection of how you see your character. You don't get to know for sure which choice is "right"; there is no "right" or "wrong" or "best" choice here. You don't get any clear signals beforehand, and you don't get any strong indications afterwards: whichever choice you make, you're going to have reasons to think it was the right choice and reasons to think it was wrong. You have to make whichever choice you think you can live with, and if it haunts you afterwards, well... there's always laudanum.

What is the nature of the relationship between the Comtessa and the Clay Man? You will never know for sure. But you have to choose, even without knowing.