What is the historical basis for Roark's claim about the Parthenon?

"Why do you want me to think that this is great architecture?" He pointed to the picture of the Parthenon.
"That," said the Dean, "is the Parthenon!"
"So it is."
"I haven't the time to waste on silly questions."
"All right, then." Roark got up, he took a long ruler from the desk, he walked to the picture. "Shall I tell you what's rotten about it?"
"It’s the Parthenon!" said the Dean.
"Yes, God damn it, the Parthenon."
The ruler struck the glass over the picture.
"Look," said Roark. "The famous flutings on the the famous columns—what are they there for? To hide the joints in the wood—when columns were made of wood, only these aren't, they're marble. The triglyphs, what are they? Wood. Wooden beams, the way they had to be laid when people began to build wooden shacks. Your Greeks took marble and they made copies of their wooden structures out of it, because others had done it that way. Then your masters of the Renaissance came along and made copies in plaster of copies in marble of copies in wood. Now here we are, making copies in steel and concrete of copies in plaster of copies in marble of copies in wood. Why?"

What is the historical basis for Roark's argument? Is this accurate? Is there some kind of reference that explores this further?

Was The Fountainhead the first book to use this line of reasoning, or was a similar line of argument used elsewhere? How do people who disagree with Roark's conclusions respond to these arguments?

The historical part of - "The famous flutings on the the famous columns—what are they there for? To hide the joints in the wood" - is accurate. When using squared shapes (i.e. lengths of wood) to build a circular structure (the column) ou will have visible joints. See this picture... 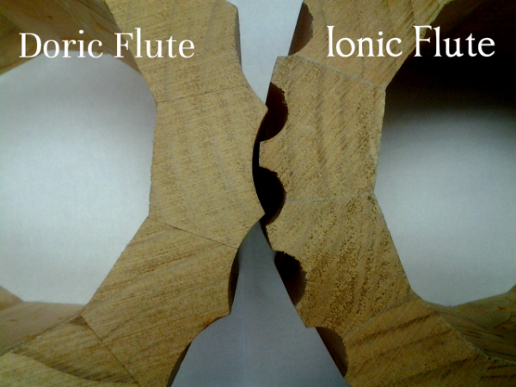 Notice how the curves (the fluting) serves to hide the joint in way the flows into the circular structure. Without the fluting those joint are more visible. With a solid piece of marble this is not needed as one can carve and shape the stone in anyway they like without having joints at all.

However, I don't think Roark's primary argument is "historical" at all really... it boils down to "First vs Best".

A Roark says - "Your Greeks took marble and they made copies of their wooden structures out of it, because others had done it that way." - and that is an argument as old as time and will be made when comparing older works of art to newer ones.

Who should we admire more William Shakespeare or Thomas Lanier "Tennessee" Williams?

Who should we admire more George Herman "Babe" Ruth or Derek Jeter?

Who should we admire more Michelangelo or Salvador Dali?

Even still Roark's argument was that the Greeks were not even creative, they merely copied what was already done, just with a new material. It would be more like if Dali was famous for painting the Mona Lisa but he used watercolors.

In the end, art is almost a wholly subjective field for critique. Roark simply has this view on Greek architecture, regardless of what the masses or experts tell him. He just uses the historical claim to show he has at least applied some level of critical thinking to the issue.

Not the answer you're looking for? Browse other questions tagged ayn-rand historical-accuracy the-fountainhead or ask your own question.

9
Is Barrett Emerson, portrayed in the TV series “Will”, a real Christopher Marlowe patron?
1
Why did Hank Rearden call the formula for his metal his “personal secret,” given that several other people in the book knew about it?
4
Isn't Ayn Rand a bit irrational in her criticism of altrusim in The Fountainhead?
1
Is Ellsworth Toohey just giving the same speech over and over again?
2
Why were Ellsworth Toohey and Peter Keating so afraid of the identity of Ellsworth Toohey's assailant?
1
How expensive was electricity during The Fountainhead?
2
Why did Ellsworth Toohey advise people against doing what they really wanted when he was a career advisor?
1
Did Howard Roark contradict Henry Rearden on the purpose of work?