Why did Thomas Hardy fictionalise the place names in his Wessex?

Most or all of Thomas Hardy's novels are set in the region of "Wessex", which (as defined by him) covers a vast swathe of England, as you can see from the map provided in this answer: 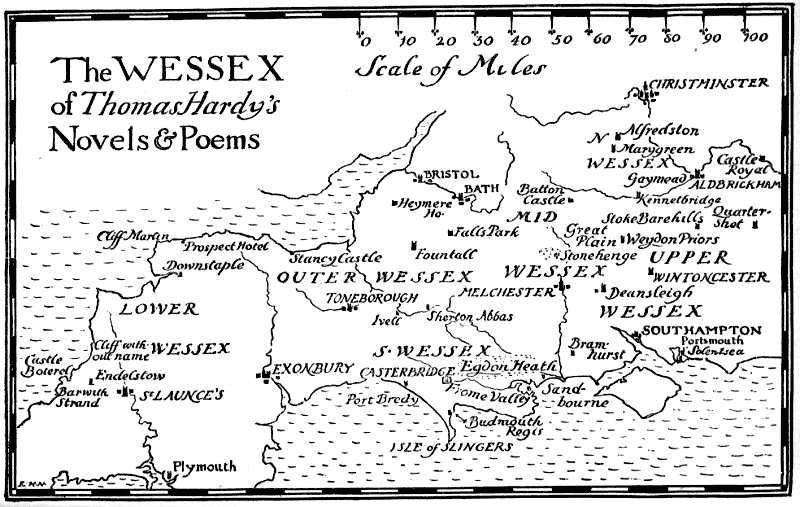 Notable towns in Wessex include "Christminster" - a very thinly veiled version of Oxford, and an important location in Jude the Obscure - and "Casterbridge", a fictionalised Dorchester and the main setting for The Mayor of Casterbridge. The list goes on: there are dozens of real towns and villages whose names have been changed for Hardy's novels.

Why did he change these place names? Why not either call them "Oxford", "Dorchester", etc., or create entirely fictional towns like Anthony Trollope's Barchester?

As user Fabjaja notes in the comments, Wessex was originally a kingdom in Anglo-Saxon Britain. While some of its peers survive in modern nomenclature (such as the county of Essex), Wessex had not. The name would have been largely unfamiliar to readers in Hardy's time - it is almost entirely thanks to his writing that it re-entered the modern vocabulary. Although not in common usage, most folk nowadays would understand that it refers to the geographical area where the books were set.

He first used the term in chapter 50 of Far from the Madding Crowd. Prior to this he had already written four novels, none of which used the word, instead referring to the area by its proper name, the county of Dorset.

Far from the Madding Crowd was the most popular of his books to date, however, and he attributed this partly to its setting in a semi-mythical rural England. The name recurs in the very first sentence of the next novel, The Hand of Ethelberta.

It is worth remembering that in Hardy's time, novels often started life as serials, and print runs were small. So, as his popularity increased, he had the opportunity to revise and edit subsequent editions of his books. He appears to have used this opportunity to change the place-names in his early books into fictional ones in his expanding mythology, making it seem more pre-planned than it really was.

The reasons why he did this, then, are partly commercial - his audience liked it. At the time, Dorset was one of the least populated parts of the country. City folk found its rural rituals fascinating. In 1912 he wrote in his General Preface to the Novels and Poems:

"the region designated was known but vaguely;"

It seems they preferred it in fictionalised form than in actual place names they might be vaguely familiar with.

Hardy, however, also felt that mythologising it offered him more creative freedom. Again in the General Preface he wrote:

Hardy was creating what he saw as his own Greek fiction, a creative space in which he could work in the manner of the classical masters of antiquity.

Not the answer you're looking for? Browse other questions tagged setting thomas-hardy or ask your own question.

9
Is there a canonical map of Thomas Hardy's Wessex?
16
Did Thomas Hardy's books get more miserable with time, and was this because of his own life?
9
Was Thomas Hardy expressing his own religious intolerance or commenting on the general anti-Semitic sentiment of the time?
7
What was the connection between Hardy and Keats?
5
Why the title Far From the Madding Crowd for the Thomas Hardy novel?
2
Thomas Hardy’s “The Man He Killed”
6
Historical King Ina and Shakespeare's King Lear in the writings of Thomas Hardy