Are quote marks used selectively in “The Handmaid's Tale” or do I have a bad scan of the book?

I've just begun reading The Handmaid's Tale and I'm a bit distracted by the usage (or non-usage) of quote marks in the version I have (ebook).

In the second chapter, the handmaid is describing her arrival at the house and her initial meeting with the lady of the house.

In the version of the book I have, none of this dialogue between the two women uses quote marks.

But later on, when talking with another handmaiden, there are quotes. 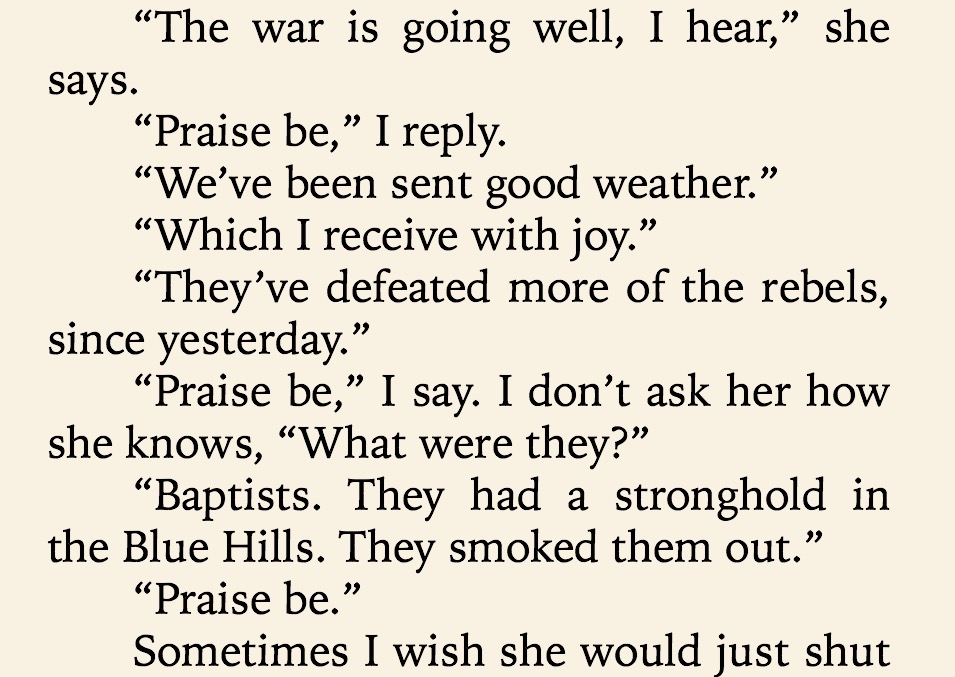 Is this a part of the printed version of the book or is this a scan error like some of the misspellings I see scattered about? In general, there aren't any missing characters, so it seems unlikely that they are so consistently missing.

If it is intentional on the part of the author, is there any explanation for this choice?

After doing a fair bit of digging on the question, I think I've come to an answer, and it's one supported by a couple sources: Quotation marks denote real dialog. Absence of quotation marks denotes dialog in memory. She uses quotes when she's writing about dialog in the present, as it's happening. When the dialog is happening in the past, however - i.e. in her memory - then the quotes are missing. In the example you've posted here, the quotes occur around the block you've selected in the present tense, but not the block in the past tense.

It appears to be a reasonably well-noted and very intentional part of the book. I found this reference, and while debatably authoritative, it does concur:

In the novel, when the main character, that is, the narrator is reproducing a speech which took place in the past she uses direct speech without quotation marks...

Whereas when Offred is repoducing a conversation which is taking place at the time of the narration, she uses direct speech within quotation marks...

I also found a far more authoritative source, Jacqueline Pelliccio from Rutgers University, who notes that the absence of quotation marks in characters' memories are indeed intended to cast doubt on the integrity of the dialog:

Without the confines of quotation marks, some of the character dialogue becomes integrated right into the storyline of the novel, mixing individual characters’ ideas with opinions of the narrator as well as with larger themes of the novel as a whole. The potential of a message to have different speakers allows for multiple interpretations of the passage, all of which may be important.

...Those in positions of authority use language to limit the ideas of the subordinates as a way to ensure stability in the system of power. ...Luke asks her a question he intends to answer himself, “Do you know what it came from? Said Luke. Mayday? . . . It’s French, he said. From m’aidez. / Help me” (Atwood, 44). There are no parentheses around Luke’s speech so the reader cannot formally tell where it ends, therefore “Help me” can be taken as Luke speaking to his wife, the narrator addressing the readers, or Offred pleading to her past self.

This methodology consistently gives passages multiple meanings, where one could easily gloss over it without any recognition.

It appears that this may have been done to tie memories more closely to the narrator, rather than conveying them as independent scenes. The lack of quotation marks is for depicting personal thoughts and feelings, as well as dialog as it appears in her memory. This would fit well with one of the book's underlying themes of gaslighting. Memory is unreliable, and is in the eye of the beholder. Quotation marks are a sign that what's being written is exactly what's being said, and removing them when the narrator begins to discuss memories is a subtle way of instilling doubt: it's just her word, only. There is no record.

Community♦
1
answered Jan 21 '17 at 0:10
user80user80
2
Add a comment  |
Highly active question. Earn 10 reputation (not counting the association bonus) in order to answer this question. The reputation requirement helps protect this question from spam and non-answer activity.

Not the answer you're looking for? Browse other questions tagged margaret-atwood the-handmaids-tale or ask your own question.