Why do some books have colors on the edges of the pages?

On some books, I've noticed that they have colors on the edges of the pages. For instance, on my Tikkun: 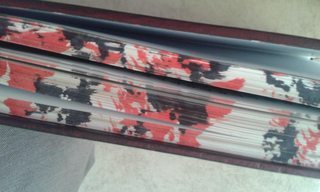 And on a G'mara (part of the Talmud): 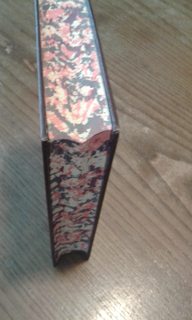 What is the point of these colors? Are they only found on religious books?

This is actually fairly common and has no real significance. It's a purely decorative process called edge painting (or fore-edge painting) because it's color painted on the fore-edge of the book (go figure).

It's common on religious texts, but that's only because religious texts simply tend to be better made and better decorated. It's quite general, though.

Not the answer you're looking for? Browse other questions tagged physical-books book-collecting or ask your own question.

19
How can I check that used or old books are in good condition before I purchase them?
10
How to travel with paperback books without damaging them?
6
Should I keep the jacket on a hardcover book?
12
Why do some books warn that books with missing covers may be unauthorised?
2
How do publishers determine how much to charge for audiobooks relative to their printed version?
6
How can I clean a book and remove mold / stains?
3
Bother to report errors in books to authors?