Where is the setting of "A Hawk in Silver" based on?

The sci-fi/fantasy author Mary Gentle's first novel, A Hawk in Silver, is set in the small town of 'Surcombe' on the south coast of England. Although Surcombe is fictional, the description of it is so precise, so detailed, so consistent in tiny minor details that don't matter to the story itself, that surely it must also be accurate, a thinly veiled description of a real town. For example, this from the first few pages, when Holly is lying on Highrock at the top of the East Hill (available on Google Books):

Surcombe Old Town lay below, a maze of narrow streets. Houses with ancient red-tiled roofs, white-plastered walls and black beams, were interspersed with shops, pubs and churches. There were miniature cars, doll-people, and sudden inky shadows that resolved themselves into black cats sleeping on dusty pavements. The main road, scaled with cars, glittered and fumed like a summer dragon. She saw grey stone spires and - raising her eyes - the West Hill and the Castle bulking opposite.

Down on the beach were fishing-boats, drawn up on the shingle in the shadow of the tarry-black net-drying sheds. Her eyes were drawn by the line of the coast past the West Hill, behind which modern Surcombe and her own home lay hidden, along to the Marina where the town ended. From Hallows Hill to Gallows Hill a heat-haze hid the marshes; beyond that lay the small town of Combe Marish and a long sweep of land that finished a score of miles away at Deepdean, where Chalkspit jutted out into the Channel. And all the time, on her left, the sea lay flat and innocent and unbearably bright.

Does the description of Surcombe match a real-life South Coast town, and if so where?

First I looked up the author, Mary Gentle, who was born in Eastbourne on the south coast of England. Eastbourne itself was then my first guess, but it didn't seem to fit: there's no castle in the town (the closest one being Pevensey a few miles away), and to the west of the town lies the massive Beachy Head, rather than a "West Hill" which divides the "Old Town" from the modern portion.

Not to be put off, however, I started widening my net. Assuming that the towns Mary Gentle is most familiar with would be somewhere reasonably close to Eastbourne, I checked a list of towns in East Sussex. Since we want a town that's fairly large but also fairly isolated, not surrounded by suburbs and smaller towns like Brighton, my next guess was Hastings. The Wikipedia article for this town (emphasis mine) was already enough to make me strongly suspect it's the one we're looking for:

Hastings is situated where the sandstone beds, at the heart of the Weald, known geologically as the Hastings Sands, meet the English Channel, forming tall cliffs to the east of the town. Hastings Old Town is in a sheltered valley between the East Hill and West Hill (on which the remains of the Castle stand). In Victorian times and later the town has spread westwards and northwards, and now forms a single urban centre with the more suburban area of St Leonards-on-Sea to the west.

Compare this with the description of Surcombe in A Hawk in Silver: Holly is on the East Hill and extending her gaze westwards to see first the Old Town, then the West Hill and the Castle, then the modern town which has spread out westwards, then another small town, then a long sweep of land ending twenty miles away at a chalk headland.

The next town to the west of Hastings is Bexhill (corresponding to "Combe Marish" in the story). Between Bexhill and Hastings is a stretch of low-lying land, Glyne Gap, which is now home to a retail park but could well have been marshland decades ago. The next large town is Eastbourne, which probably corresponds to "Deepdean", and certainly the "Chalkspit" jutting out into the channel must describe Beachy Head.

The description of East Hill, from immediately before the passage quoted in the question, also fits exactly:

Jesus, today's hot! Coming to the end of South Street, she looked undecidedly down the main road to the overcrowded beach. Not a hope. I gotta get out of here for a bit.

She threaded her way quickly through the crowds to the Fishmarket. A few minutes later she was at the top of Tackleway Steps, at the foot of the East Hill.

Where it faces the sea this is a sandstone cliff pocked with caves. On the town side a steep gorse and bramble-covered slope has one twisting stairway leading up it. At the summit a grey rock juts out like a ship's prow. Beyond that lies high, wide and grassy downland, the gorse-yellow Fire Hills and Starshell Cove.

There is a South Street in Hastings, which meets the "main road" (London Road) close to the beach. The East Hill is a sandstone cliff, looking sheer from the sea side but with a path up behind it. Beyond it to the east is a wide sweep of downland and a bay with a naturist beach.

Here are images of the East Hill at Hastings, and of the Old Town from the East Hill. (Click for full-size versions.) The second picture is much like what Holly would have been seeing in the passage quoted in the question. Note how the main road really does wind like a dragon through the town! 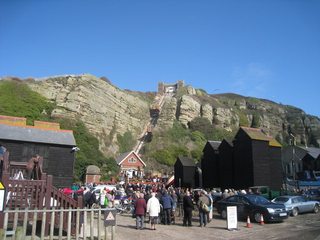 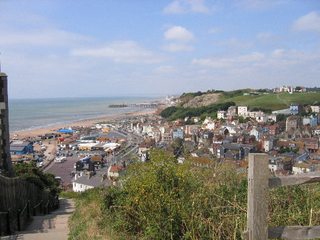 Most clinching of all, the road just on the town side of the East Hill is indeed called Tackleway. This seems to be the only distinctive name which isn't altered in the novel - perhaps as a sort of Easter egg, a nudge and a wink to people familiar with Hastings.

Let's check everything on a map (the red indicated point near the right-hand side is Tackleway):

It's virtually 100% certain that the town being portrayed by Gentle's "Surcombe" is Hastings. A fitting place, perhaps, for an invasion from the sea to take place!

8
Is Strattenburg, Pennsylvania based on a real town?
14
Where are the white folks in The Expanse?
7
Where are Greenfield and Silver City in The Boxcar Children?
5
Did Shakespeare err in using Ephesus as a port setting?
6
Is the castle where Mr. Toad is imprisoned a real place, or based on a real place?
4
Why is "The Vanishing Half" set in Louisiana?
3
Where is Thisby in The Scorpio Races?