I have a very distinct yet vague memory of a book I remember reading at school. It had very little text, and was illustrated, in a format similar to Jumanji or Where The Wild Things Are. The illustration style was very similar to the former - almost surreal in its hyperreality and severity - maybe a little like the style of P.J. Crook.

The narrative concerned a young boy whose father left him at home, possibly to pick his wife up from the hospital as she has just had a baby. I'm wondering if the title is something like 'The New Arrival' but I have tried countless google combinations, I just haven't been able to find it.

In the story, the boy is left alone in the house and begins to see strange things, such as faces in the walls. I remember very vividly an illustration from his point of view looking into the washbasin in the bathroom, and the plug hole has turned into a face. There's another part where the garden wall seems to have been anthropomorphised.

This was probably published in the 80s or 90s. I probably encountered the book in around 1995. It was a large hardback, but probably only had a few dozen pages. It was written in English, was not likely a translation as I recall the boy's house looking like an ordinary British house, but I may be mistaken. It was written for children but was quite 'strange'.

This is Changes, by Anthony Browne, published in 1990. I can't lay hands on my copy at the moment but below is the cover, copied from this website. 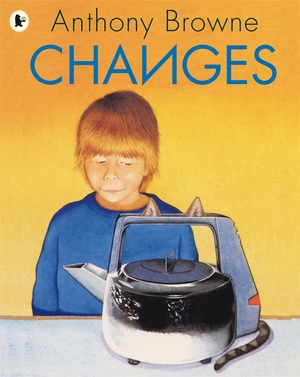 Some of his illustrations can be quite surreal, which may be why he illustrated an edition of Alice's Adventures in Wonderland. Gorillas are also a favourite of his to draw, and he has written several books starring Willy, a chimp.