Why does Lung the Quick's tombstone read "No Unicorns in Heaven"?

I'm reading Digger, and there's a scene in chapter six where Mural is crying next to a tombstone that reads "No Unicorns in Heaven."

What does the tombstone mean?

Here's the scene you're talking about (click for full-size version): 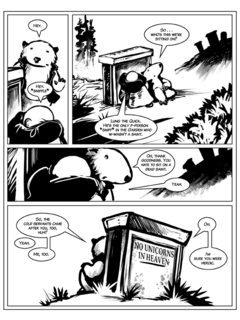 As mentioned in the comments on the page linked above, the backstory of Lung the Quick is explained in more detail in the first Digger book. If you don't have the book, it's also summarised here (OK, that site isn't a reliable source in itself, but it's sourced directly to the book) as follows:

A book-only expansion to Digger tells us the story of a sculpter "commissioned" by a mad emperor, who had a forehead deformity and believed himself to be part-unicorn, to create statues of unicorns and nothing else. The artist came to hate unicorns, and dreamed of creating a perfect statue of the god Ganesh, which he accomplished after the emperor tried to eat poison and died. The epitaph on his tombstone reads, "There are no unicorns in Heaven."

47
Does Dr. Manhattan have free will?
8
Does V reference Stanislaw Lem's "His Master's Voice", and if so, why?
9
What does Dream's ruby represent?
12
What's the significance of the witches' name change in Sandman?
18
When did the Rupert Bear stories start repeating themselves?
6
Why is The Dreaming a simple place compared to Hell?
5
Listing the books in the archives of the Temple of Ganesh