What is the origin of Endless' lettering styles in "The Sandman"?

In the prologue of Season of Mists (the fifth volume), a family reunion occurs and the six Endless siblings are formally introduced, and have speaking roles: 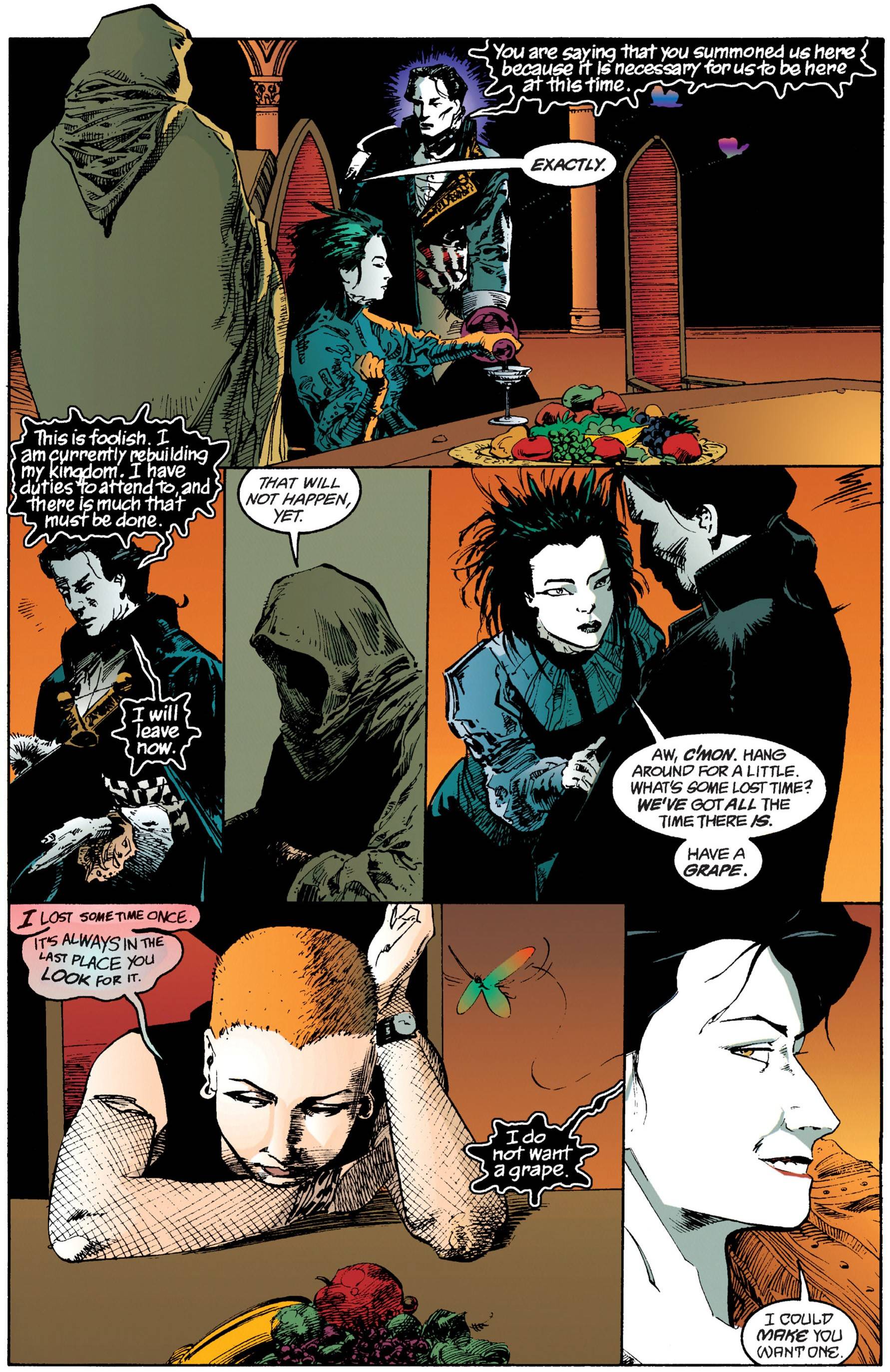 As shown, each has a unique lettering style, which encompasses not only the letters but also the shape and colour of the speech baloons.

1: Except some 3 issues, where John Constanza replaced him.

Well, you already sourced everything so this seems kind of needless, but I'm still under 125 rep... so sure:

Per this blog post, Mr Gaiman had ideas about how the characters' voices sounded and Mr Klein was responsible for translating that into lettering.

The most unusual was the style used for Delirium. Our idea [sic] was to make it seem unfocused and constantly varying in pitch and loudness, which I accomplished by making the lettering continually larger and smaller, and in wavy lines... This was fun in small amounts.

Sandman: Overture came after hand-lettering comics was dead at DC, so the lettering there is based on fonts Mr Klein created from his former work, except for Delirium. Her bits, he had to do by hand again, scanning and adjusting things in Photoshop, including her speech balloons' shading, which had formerly been someone else's department.

Per this blog post, Mr Klein fought against using negatives of his work to give Morpheus his black speech balloons. DC's editor Karen Berger wanted it and it happened, but Mr Klein was right that the original comics included various smears and misprints because of the variable quality of the reversed photostats. It's been cleaned up in reprints and he came around to appreciating it.

Per this interview in Hanging Out with the Dream King, which Google Books blocks pages of, the lettering was taken rather seriously with an eye towards immersion and effect:

There were... cases where we needed a particular historical reference, like the Shakespeare issue, the final issue[,] where I did a lot of research to get something that would be an approximation of what Shakespeare's handwriting might have looked like. You do have to keep it appropriate, but sometimes little things like that can really add to the storyline, I think, as far as the style or the font used.

Life being what it is, we didn't always get the full intended effect:

...once you've established something for a character, you have to go back to it every time the character reappears. This can be a problem sometimes, because there were some cases where Neil would write a character with a note saying, "Let's do something exotic, like curlicues." I would say, "Well, that's fine, but how often are we going to see this character, because it's going to take me a lot of time and I don't want to spend an extra hour per page. Is this going to be a regular character?" And he would say, "Oh, don't worry, this is just a one-time appearance."

Of course, two issues later, the character would be back.

...the art to me suggested art nouveau. But I had to do something I could letter consistently without too much difficulty. Real art nouveau lettering is not designed to be hand lettered, so I had to come up with some kind of a compromise that would work.

Some of the other lettering styles for the Endless included Destiny's, whose speech was rendered in italics, and Destruction's heavy lettering, with heavy black border.

That was just meant to give the impression that he spoke loudly, and to differentiate him from the others a little bit.

...[It] was something Neil suggested. He wanted it to be not as full-blown in its effect. So I tried to come up with something that was half-way between normal lettering and the full-blown Delirium style for Delight.

For Mathew the Raven:

That's what I was going for—you drop a bunch of pick-up sticks on the ground and it spells some letters. That's the effect I was going for. And Mathew's a raven, who has kind of a rough, scratchy voice, so that was part of it. Also, I just felt it gave it an untidy look that matched his character, an untidy approach to life, I think.

For the dog Barnabus:

...his upper and lower-case style, I just thought, fit his personality for some reason. It's kind of a rounded, maybe slightly childish style that I thought worked for him. He has a typical dog character that suggested that to me.

...he wanted to come up with a concept where we wouldn't have the [cats] actually speaking. So we came up with a combination of a thought balloon and a speech balloon, so it would have some aspects of both. We used that in a few other places as well.

Not the answer you're looking for? Browse other questions tagged comics the-sandman todd-klein or ask your own question.

8
What's up with the colors of Delirium's speech bubbles?