Why does Ishtar insist on being called "Ishtar"?

There are many characters in Gaiman's Sandman stories that have multiple names; Morpheus is one of them. For the most part, they usually don't mind if someone calls them by one name or another. The first that I've seen this happen was with Ishtar.

After meeting Ishtar, Morpheus calls her by two other names for goddesses of love (Belili and Astarte). She corrects him both times, asking him to call her only "Ishtar." 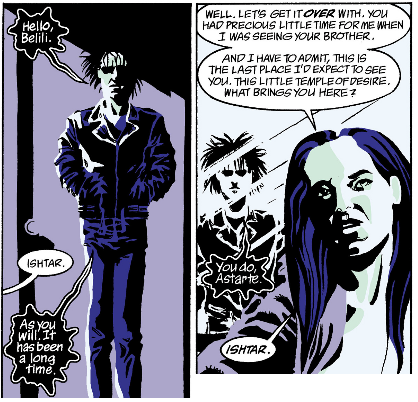 both images from The Sandman #45

Ishtar: What brings you here?
Dream: You do, Astarte.
Ishtar: Ishtar.

This exchange is interesting, and makes me wonder if there is a reason that Ishtar insists on that name, as opposed to the others? Perhaps there is a historical element of worship that Ishtar had that Belili and Astarte didn't, that allowed her to draw the power she needed to live from the nightclub where she danced?

I think @Shokhet is probably correct in that it's likely a form of teasing/light antagonism, but, on further reflection, it probably goes deeper than that.

Belili is the underworld version of Ishtar, and the Sumerian underworld is no kind of fun.

Specifically, working in a strip club where dancers have to put up with a lot of crap, as men in such settings do not always act in a respectful manner. This is particularly problematic when you remove the "temple" context [see note], resulting in a degraded form. Sex workers are widely stigmatized.

Further, as I seem to recall, she cannot really dance, in the sense of her status as the Great Goddess, which must be a kind of torture. (She cannot be herself, only a diminished reflection of herself.)

This may be a reference to a certain conception of the cycle of Greek Mythology, which from certain perspectives (certainly Graves's) can be understood as a subjugation of feminine power, which is to say diminishment of the power and status of the Great Goddess.

Note: The idea of "temple prostitution" in Mesopotamia is disputed, but the idea caught hold, as it can be regarded from many perspectives, including a feminist perspective, and is definitely present in modern, speculative fiction. It is this idea Gaiman is referencing with Ishtar's situation and existence. Taking the life of her lovers is sometimes referred to as the Great Marriage (aka death). Gene Wolfe wrote about this aspect of the Goddess in There Are Doors.

The reason for her insistence on the name Ishtar could be quite simple.

Belili is the name applied by the Canaanites (1) who were Hebrew, and had their own God. Astarte is the Hellenised form (2), as in Greek. They too had their own Gods. Ishtar is the original Mesopotamian version (3,4) and was associated with far more than just sex.

This could suggest that this is the name that represents her most powerful, and original (5), form. If you consider that she talks about temple prostitution, this would have been a ritual - whether real or made up by Herodotus (6) - that gave her A LOT of power, since worship is what give Gods power in the Sandman universe (7).

By calling her by these other names Dream might (whether unconsciously, or on purpose I cannot say) be reminding her of less powerful forms. Her decline from a main goddess to an exotic dancer who is barely hanging on to power.

You're overthinking it. As the 'great mother goddess', Ishtar is literally the 'many-named', the 'thousand-named', the 'myriad-named' and—while you can guess at why the character Morpheus goaded her into suicide by calling her by her lesser names—the author Gaiman is just taking the occasion to point out her other names and former importance, amid her present squalor.

...is [there] a reason that Ishtar insists on that name, as opposed to the others?

Ishtar is her stage name at the strip club.

Dancers don't want Johns bringing their personal business and lives into the clubs or with shutting up their coworkers once they catch wind of it. She goes by Ishtar these days for everyone, including her coworker and roommate. So she coldly shuts off his nonsense. Gaiman is writing at both the level of gods interacting with one another and the pedestrian life of a stripper amid her Johns. He hits both notes very well.

Not the answer you're looking for? Browse other questions tagged character-analysis neil-gaiman the-sandman myths or ask your own question.

13
What's the significance of the witches' name change in Sandman?
8
Why does Night say Desire and Morpheus are alike?
11
What does Narcissa Malfoy's name say about her character?
6
Why are Delirium's eyes of two colors?
13
Why does Morpheus look like Neil Gaiman?
9
Are the guardians of Dream's palace based on mythology? Are they symbolic?
9
Did young Dream and Death really look like this?
2
Why does Lucifer mention Raguel and Sandalphon as possible rebels among the angelic host?
6
Are Tigris in The Hunger Games and Tigris in The Ballad of Songbirds and Snakes the same person?