I read this novel about 3 years ago on the train, having borrowed it from a co-passenger. I couldn't read the whole book and I'd like to complete it now.

When did you read the story, and how old was it?

I read it 3 years ago and I don't remember how old it was.

If I remember correctly, the cover has a brownish picture with the title of the book. It was, I think, a picture of long brown hair.

It was a novel with hard cover and must have had around 200-300 pages.

What language did you read it in, and was it translated?

It was in English and I can't say if it was translated. It was set in the UK or USA, but it might not be translated I suppose.

It was particularly about teenagers attempting and succeeding in suicide.

This novel was about a family with five teenage daughters. It starts with an ambulance to bring the body of one of those girls who committed suicide. Then a back story starts.

One of those girls tries to commit suicide, but fails. However, she does it again and dies. Thereafter, another one tries and succeeds. This thing goes on and on.

The motive isn't explained in the story till the last I read. This is the suspense I want to know.

When I had to give the novel back, three of them had committed suicide.

I Googled "Novel about teenage sisters committing suicide," and the first result from Wikipedia was for The Virgin Suicides.

The Virgin Suicides is the 1993 debut novel by American writer Jeffrey Eugenides. The fictional story, which is set in Grosse Pointe, Michigan during the 1970s, centers on the lives of five sisters, the Lisbon girls. The novel is written in first person plural from the perspective of an anonymous group of teenage boys who struggle to find an explanation for the Lisbons' deaths.

Here is an image of the cover from Wikipedia, with a closeup of brown hair: 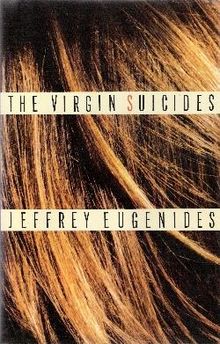 The Virgin Suicides, by Jeffrey Eugenides

As an ambulance arrives for the body of Mary Lisbon, a group of anonymous neighborhood boys recall the events leading up to her death.

Without warning, Cecilia attempts suicide by slitting her wrists in the bathtub. She is found in time and survives. A few weeks later, their parents allow the girls to throw a chaperoned party at their house in hopes of cheering Cecilia up. However, Cecilia excuses herself from the party, goes upstairs, and jumps out of her bedroom window. She is impaled on the fence post below, and she dies almost immediately.

3
Was the motive behind this ever explained by the author of The Virgin Suicides?