Is there a word for a literary technique that allows a short passage to be read aloud in more than one way?

I recently started reading Sam Logan's Sam and Fuzzy online, and am greatly enjoying it.

In the fifth volume of the NMS Series (Sam and Fuzzy Missing Inaction, "Boundaries, Pt. 9") there's a cute scene where Sam references the Hokey Pokey, and two other characters finish the traditional verse. 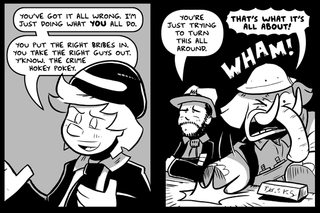 Sam: You've got it all wrong. I'm just doing what you all do. You put the right bribes in. You take the right guys out. Y'know. The crime Hokey Pokey.

Paxton: You're just trying to turn this all around.

Tusks: THAT'S WHAT IT'S ALL ABOUT! (slams hand on table with a WHAM!)

Now, there are two ways to read this exchange, if one were to read it aloud, with stressing and inflection. You can read it as a normal verbal exchange, and ignore the song -- then Tusks is shouting, after having just understood Sam's true intentions. However, you can also read it (as I suspect most people would) with the inflection and tones (and probably even music!) that belong to the song, up to and including the "WHAM" at the end. This leads to a curious (and fun!) effect.

Is there a term for a passage like this one, that deliberately messes with the way that a reader will form the words in their mind?

"Double entendre" crossed my mind, but that effect is one of meaning, not inflection.

Browse other questions tagged literary-device or ask your own question.

6
Are there earlier incidences than Merchant of Venice of an angel on one shoulder and a devil on the other?