What is a "Cristopher"?

In the General Prologue of The Canterbury Tales, Chaucer describes a character who is a yeoman in service of a knight. It's mentioned on line 115 that the yeoman has a shiny silver "Cristopher":

A Cristopher on his brest of silver sheene.

What exactly is a "Cristopher", and what does it tell us about this character?

A "Cristopher" is a St. Christopher medal, to this day often cast in silver. According to reference.com's definition (there are hundreds of definitions online; this one was chosen due to its clarify of wording):

The Saint Christopher medal is worn by members of the Catholic Church as an appeal to Saint Christopher, the patron saint of travelers. By showing their devotion to the saint in this manner, Catholics believe he will bless them and protect them from storms and other hardships they may encounter. Saint Christopher began to be well recognized for his piety starting in the fifth century....

But back to Chaucer: If you read the description of the knight, you can see he dresses simply, even though his deeds are formidable,

His steeds were good, but he was not gaily dressed.
A tunic of simple cloth he possesed
Discoloured and stained by his habergeon;
For he had lately returned from his voyage
And now was going on this pilgrimage. "

(Translation from General Prologue on Librarius, which presents the Middle English text and a modern English version side by side.)

The Yeoman, on the other hand, dresses in a bright and colorful manner, with the silver St. Christopher's medal on his chest, as if to show off, rather than keep it private, as a protection in travels. Again, see General Prologue, lines 101-117: The Yeoman on Librarius.

Either man shows his character in his chosen dress. The Knight has no need to show off. The Yeoman is trying to look as if he is more important than he actually is.

Although Vekzhivi's answer is not bad, I think I can add a few things.

The spelling of "cristopher" varies between editions. For example, the Norton Critical Edition of the Canterbury Tales (edited by V. A. Kolve and G. Olson, 1989) has the following line:

A Cristofre on his brest of silver shene.

A medal of St. Christopher he wore
Of shining silver on his breast, (...)

Saint Christopher is or was the patron saint of travellers, but why is this and what made the medal recognisable?

There are several legends related to Saint Christopher; one of them is part of the Golden Legend, compiled by Jacobus de Voragine. See especially the following passage:

Then went Christopher to this river, and made there his habitacle for him, and bare a great pole in his hand instead of a staff, by which he sustained him in the water, and bare over all manner of people without ceasing. (...)

Then he awoke and went out, but he found no man. And when he was again in his house, he heard the same voice and he ran out and found nobody. The third time he was called and came thither, and found a child beside the rivage of the river, which prayed him goodly to bear him over the water.

And when he was escaped with great pain, and passed the water, and set the child aground, he said to the child: Child, thou hast put me in great peril; thou weighest almost as I had all the world upon me, I might bear no greater burden.

And the child answered: Christopher, marvel thee nothing, for thou hast not only borne all the world upon thee, but thou hast borne him that created and made all the world, upon thy shoulders. I am Jesu Christ the king, to whom thou servest in this work. And because that thou know that I say to be the truth, set thy staff in the earth by thy house, and thou shalt see to-morn that it shall bear flowers and fruit, and anon he vanished from his eyes.

This type of story explains the origin of his name: "Christophoros" or "Christ-Bearer". It also explains why he is the patron saint of travellers.

So a medal of Saint Christopher would be very recognisable, since it would show a man carrying a child on his back, like this medal on Wikimedia: 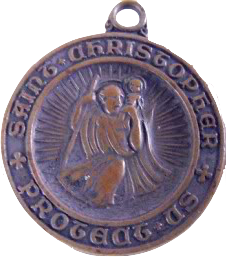 22
Looking for a poem about the (fictionalized) writing of The Canterbury Tales Prologue
8
What is the meaning of this paragraph from Philip Lombard's introduction in "And Then There Were None"?
13
Why is the month of Aprill masculine?
5
Significance of the Pardoner's hair style
2
Is this a joke about the length of the General Prologue?
2
What is the effect of using “silver” to describe the “horn” in "Madman's Song" by Elinor Wylie?
1
What does H. G. Wells mean by "He had added to exceptional business 'push', bankruptcy under the old dispensation, and judicious matrimony."?
4
What is Watson's "old service" in "His Last Bow"?