What was the original “The Sound of Silence” about?

I've had this version, by the Maccabeats, of the classic song "The Sound of Silence" stuck in my head for a while.
(because @Shokhet linked me to it.... -_-)

This version, by Jew in the City and the Maccabeats, makes a point about cellphones (via the music video). Such as at 1:39: 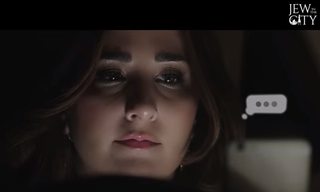 However, the original version by Simon and Garfunkel, was not about cellphones - the cell phone was invented in 1973, and "The Sound of Silence" was recorded in 1963/1964.

So - what was the original message of the song? What caused the sound of silence?

I don't think the song states or implies an ultimate cause. But the proximate cause is made explicit enough:

"What we've got here is failure to communicate." The Sound of Silence is about a culture in which people don't really connect with one another. They may make flappy noises with their lips, those noises may impinge on others' eardrums, but not much beyond that is happening.

I don't think the song specifies (or tries to) anything more about how that state of affairs came to be. It's easy enough to spin plausible theories (it's all the fault of commercialism, represented here by the Neon God of advertising! it's all because of passive entertainment-consumption, represented here by the Neon God of technology and television! or even, less plausibly: it's all the fault of abandoning traditional cultural and social structures, which is why the only prophets are the ones writing slogans on subway walls!) but there's no particular reason to think S&G had any specific aetiology in mind, still less any way of picking out which one if they did.

See also this answer to another SoS question which quotes both Simon and Garfunkel on the topic and I think bears out what I said above.

Silence is the absence of sound. The title, then, is a paradox.

It's important to understand the historical context of folk rock. The world was recovering from a devastating war, not just physically and economically but psychologically. How do you live in a society that is capable of genocide? What does it mean to be human when members of your species consider industrialized murder not only possible but a worthy goal? What can you accomplish when nuclear war may break out at any moment and destroy everything? How can you be human in the midst of so much inhumanity? Another parodox.

The events of the song take place in a dream. There's tension all through the song between opposites: the ideal and the real, the individual and society, light and dark, sound and silence. The singer addresses darkness itself as a friend and walks through a dark city. There's no loneliness so acute as when you know there are people all around you. Simon's depression certainly informed this image.

The "neon god they made" is the central image. Is it television? Is it religion? Is it war? Yes, it is all those things and more. Everyone hears the message. Everyone follows the cultural imperative. No one wants to hear an alternative, much less consider it. There is an infinitude of options that do not end in greed and death. There are none so deaf as those who will not hear, and no sound will penetrate that willful ignorance. The singer makes a sound, but to the multitude it is silence, drowned out by orthodoxy. His words fall into a well of other wise thoughts, ready to be drawn out by those who will heed them. No one in this vision will heed.

Is the message still relevant? More than ever, but few are willing to listen. Our instinct as individuals is to survive, but our instinct as cultures is to destroy. The final paradox.

Not the answer you're looking for? Browse other questions tagged song-lyrics simon-and-garfunkel or ask your own question.

15
What is the “Neon god” in “The Sound of Silence” by Simon and Garfunkel?

15
What is the “Neon god” in “The Sound of Silence” by Simon and Garfunkel?
8
How does the line 'your faith was strong but you needed proof' match the rest of the verse in “Hallelujah”?
7
What is the significance of the words of the prophets being written on the subway wall?
4
What was the “cyclops' smoky band” to which Ewan MacColl's father belonged?
1
What are the thousand churches in “In your eyes”?
2
Summer Wine: what was the 'unfamiliar line' with which the girl reassured her lover?
2
What does the line about the Tower of Babel mean in Ishay Ribo's “Keter Melucha”?