Why would one call a Japanese Jew "Sosumi"?

While doing some background research for another question about Daniel Clowes' Ghost World, I stumbled upon this article, which mentions the following exchange: 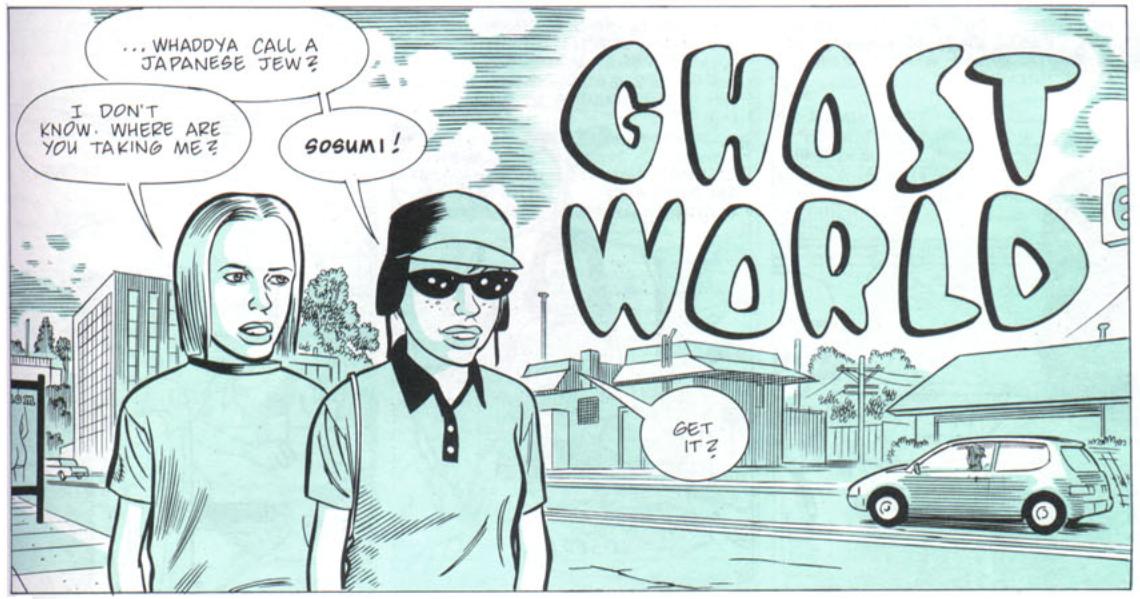 . . . I don't get this. The first thing a search yields for "sosumi" is the Apple notification sound, and some further search shows that "sosumi" == "so sue me", and I don't understand how that is relevant either. There is also the Japanese restaurant in Jerusalem, and a records label.

Neither of those substituted in the joke make it funny, which makes me conclude that I'm missing some context, especially with Enid (probably) being Jewish, and Daniel Clowes comes from a Jewish family as well (and Enid Coleslaw being an anagram of Daniel Clowes, and all that).

So what is the joke?

The pun plays on the negative stereotype that Jews are prone to using sharp business practices to take advantage of non-Jews, and that when confronted they respond by asserting that there is nothing the non-Jews can now do to reverse what has happened, since the law would uphold the Jews' right to act as they acted, however sharp or unforeseen their action may have been ("so sue me"); and it uses the fact that "so sue me" sounds as if it could be spelled "sosumi", which could easily be a Japanese word.

It does not refer to a non-existent stereotype that Jews are prone to being litigious.

Apple Computer is said to have adopted the name "sosumi" for its beep sound with reference to a longstanding legal battle with Apple Corps, the media company founded by members of the musical group the Beatles. Apple Computer had agreed in the settlement not to enter the music business, but when the creator of the alert chime heard from the company's legal department that the sound might be regarded as too musical, he joked that it should be called "Let it Beep", with reference to the Beatles' song "Let it Be". Further told that the legal department wouldn't like that name either, he responded "so sue me", which stuck.

The pun is to be read as "so sue me," referencing a negative anti-Semitic stereotype that Jews are prone to sue others often.

The article you cited quotes this joke as an example of an anti-Semitic joke in the work:

In the pieces at MCA and in Clowes’s larger body of work, Jews and anti-Semitism often hide in plain sight. The name of the “Ghost World” protagonist, Enid Coleslaw, is an anagram for Daniel Clowes, and Enid is Jewish.

She declines a bagel from her friend Rebecca (“Becky”) because the bagel is “too WASPy,” and she shares a joke with Becky: “Whaddya call a Japanese Jew? Sosumi.”

Not the answer you're looking for? Browse other questions tagged comics daniel-clowes ghost-world or ask your own question.

14
Why are manga panels read differently than Japanese text?
3
Why would Image Comics publish "Sunstone", after it was released as a webcomic?