Why does Lucifer mention Raguel and Sandalphon as possible rebels among the angelic host?

In chapter two of Season of Mists, Lucifer mentions the angels Raguel and Sandalphon as angels who could rebel [against God]:

Why those two angels?

TL;DR: Both are mentioned in other works ("Murder Mysteries" and Lucifer, respectively) as angels who were somewhat disillusioned with Heaven and followed Lucifer in his rebellion. Spoilers!

Raguel's story is described in "Murder Mysteries"1, a short story by Neil Gaiman, collected in Smoke and Mirrors, which also has been adapted into a comic by the ubiquitous P. Craig Russell.

Raguel is the angel whose function is to be the Vengeance of the Lord; he was tasked with finding the murderer of another angel, Carasel. So he did, and it turned out that

Carasel was murdered by his lover Saraquael, because the latter didn't feel he was getting enough attention.

The most interesting part is the beginning of the temptation of Lucifer, and the events described in the story were the first that led to his rebellion. Moreover, it was not only Lucifer that was disturbed - Raguel himself was also shaken, not only because he wasn't sure the justice he executed was not the right thing to do, but also because he had been played by God to show Lucifer the injustice of the Lord:

‘And were you wrong to destroy him?’

I looked into His old, old eyes. ‘It was my function. But I do not think it was just. I think perhaps it was needed that I destroy Saraquael, in order to demonstrate to Lucifer the Injustice of the Lord.’

He smiled, then. ‘And whatever reason would I have for doing that?’

‘I . . . I do not know. I do not understand—no more than I understand why You created the Dark or the voices in the Darkness. But You did. You caused all this to occur.’

He nodded. ‘Yes. I did. Lucifer must brood on the unfairness of Saraquael’s destruction. And that—amongst other things—will precipitate him into certain actions. Poor sweet Lucifer. His way will be the hardest of all my children; for there is a part he must play in the drama that is to come, and it is a grand role.’

Raguel followed Lucifer in his rebellion and also "fell"... but continued to perform his function on Earth. 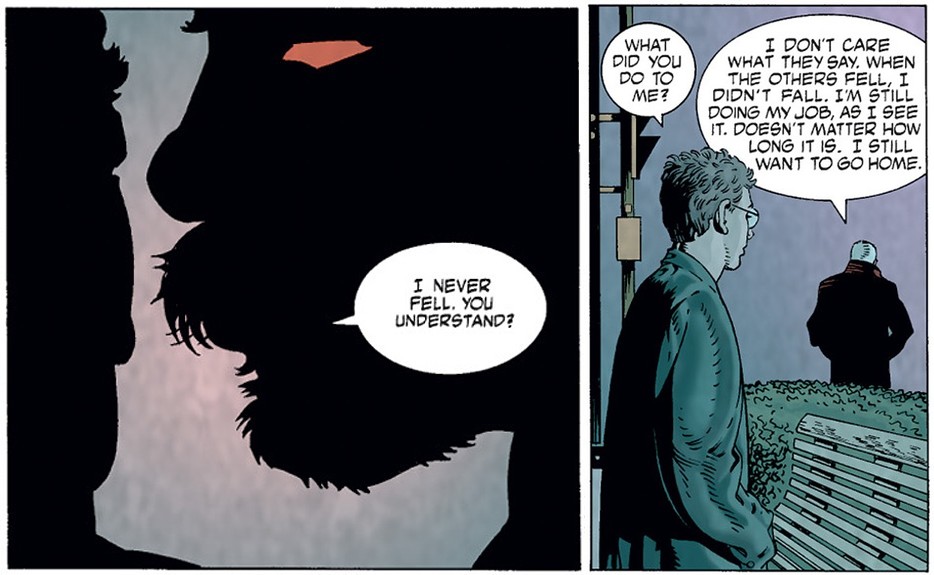 Sandalphon's story is first described in Lucifer3 #11, "Children and Monsters pt. 2". He followed Lucifer too, and like Raguel, he did not abandon old habits once on Earth. However, he was far less down-to-earth (no pun intended) than Raguel, and considered himself almost a successor for Lucifer. First, in the issue I mentioned, he tried to

breed angelic stock from the seed of the archangel Michael, to use them in a war against Heaven. 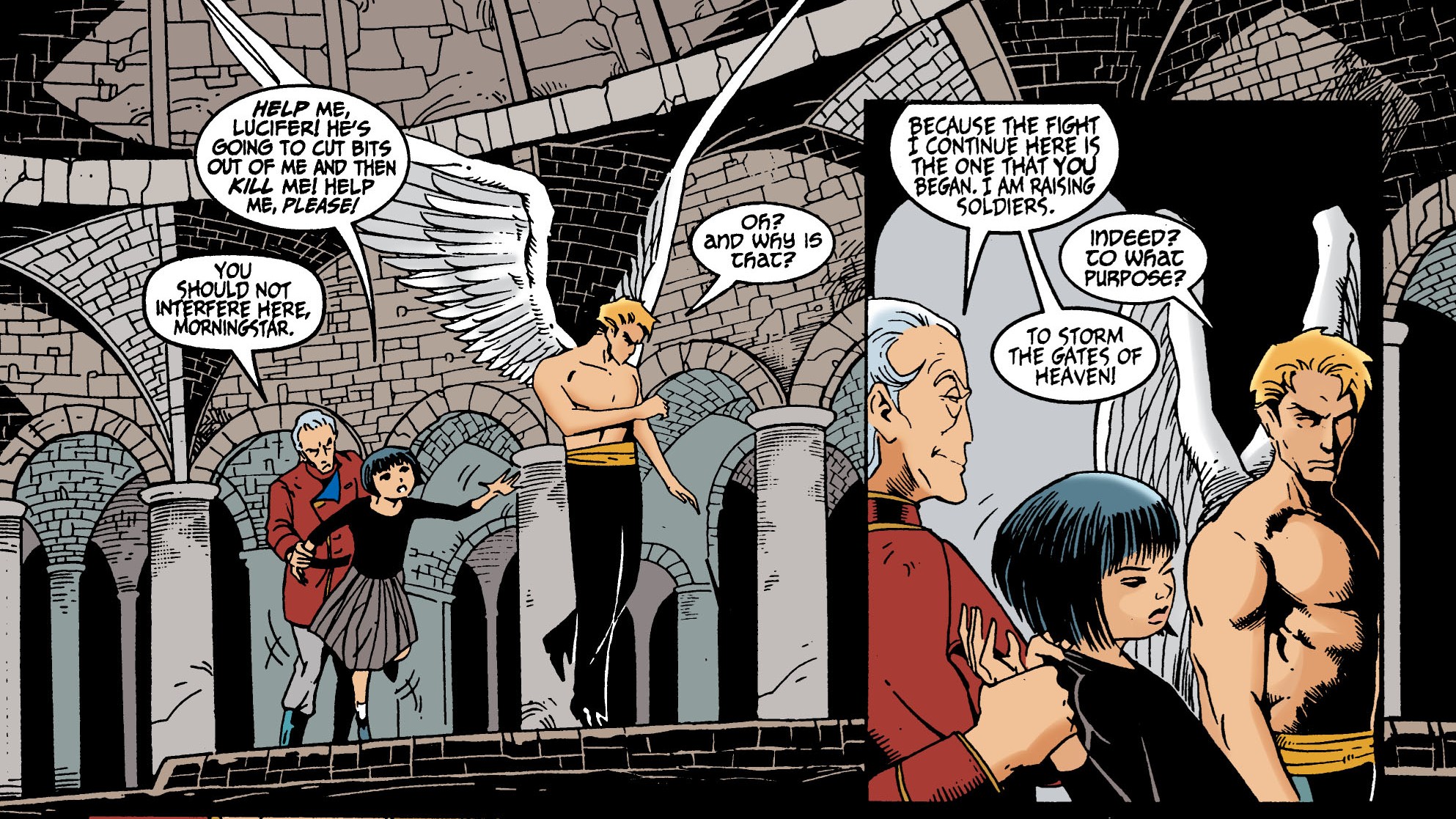 Then, after Lucifer intervened and "canceled" those plans for good, we learn , in #60 "The Breach pt. 2" that

Sandalphon had been conceiving children with Lilith, creating an army of angelic half-breeds, that he and Lilith lead to war on heaven in further chapters. 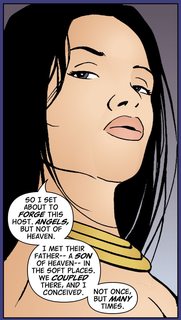 1 Because neither the short story nor the comic adaptation were published by Vertigo, one may point out that this connection may be completely superfluous. However, since both the short story and Season of Mists were published roughly at the same time (1992, with The Sandman issues #21-#28 having been published in 1990-1991), it is quite possible that Neil Gaiman had planned this story when writing Season of Mists, but couldn't publish it with The Sandman, as it has got nothing to do with the Sandman; Gaiman had noted in The Sandman Companion that he got side-story ideas when writing the main plot, and would later develop them in other volumes that were not bound by a common story arc. This was the case with the stories about Death - "Death in Venice", "The High Cost of Living", and "The Time of Your Life".

2 The story is interesting in a number of ways; from The Sandman mythos perspective, it sheds light on the beginning of the universe at the time even most Endless did not exist (Destiny did, and Death was likely born during this story; some angels mention creating Sleep as a concept, which may be a reference to the birth of Dream).

It is also interesting because it is very close, chronology-wise, to the events of "Lilith", Lucifer #50, which was also illustrated by P. Craig Russell (I do not believe this is a mere coincidence). While "Murder Mysteries" describes the first event that led to Lucifer's rebellion, "Lilith" describes the last drop after which Lucifer (rejected Samael as his name) and departed from Heaven.

3 Since the Lucifer series was not written by Neil Gaiman but by Mike Carey, and contradicts (somewhat) The Sandman canon on few points, e.g.

in Lucifer, the Lighbringer did not fall from Heaven to Hell, but was offered to rule Hell as a compromise by his creator, as Hell was the farthest place there is from Heaven.

one may argue that it is not canon either. However, the discrepancies can be attributed to a changed point of view, or to a difference in narration. Regardless, Neil Gaiman had helped (advised) Mike Carey in making Lucifer, so I assume it was done with his blessing.

8
What's up with the colors of Delirium's speech bubbles?
13
Why does Morpheus look like Neil Gaiman?
9
Are the guardians of Dream's palace based on mythology? Are they symbolic?
7
Do "The Sandman" and "Lucifer" deliberately share the number of published issues?
12
Which traits of Milton's Lucifer from "Paradise Lost" did Neil Gaiman carry to "The Sandman"?
4
Why is desire "a commodity [Lucifer is] short on"?
6
Why is The Dreaming a simple place compared to Hell?
4
What is the origin of Endless' lettering styles in "The Sandman"?
5
Why Night and Time?