Who are all the Priestesses and Gods?

In Seanan McGuire's Incryptid series, there are the Aeslin mice, who believe the Price/Healy men are their gods, and the women are their Priestesses. They give them all names (like the Arboreal Priestess (which I think is Verity), the Precise Priestess (Antimony), and the God of Chosen Isolation (Artie, maybe?)

The problem is, it's hard to keep track of all of these. What are all the known names of the Priestesses and Gods, and which character do they match up with?

I'm still reading through the short stories, so I may update this in the future, but I decided to do a full family tree with the names as far as I could sort them out. I need to collect all of the reference info, but let me know if I got anything wrong or missed anything important! 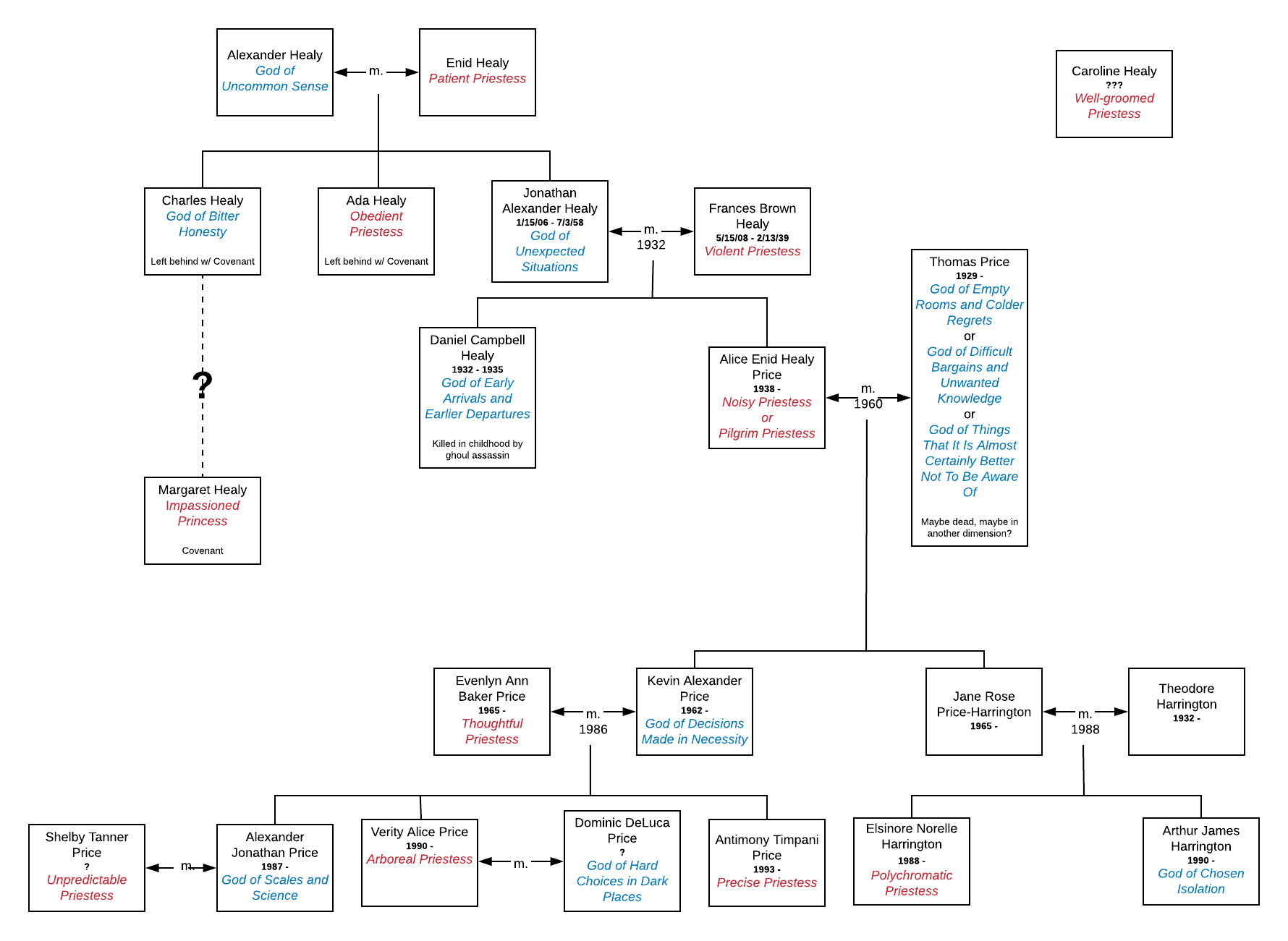 Going to post the ones I've found so far, and add as I find more. (This might contain spoilers, if you've not read all the books, but very minor ones.)

“The Calculating Princess conducts the Rites and Rituals of her Kind,” squeaked a voice next to my ear. I glanced to the side. The Aeslin mouse standing on my shoulder ...

Citations for some more names.

In "Snakes and Ladders", Fran says this to Alice's ghost babysitter Mary Dunlavy: "They call you 'the Phantom Princess', an' as far as they're concerned, you're part of the family."

"Lay of the Land" may shed some light on the identity of Caroline, The Well-Groomed Priestess. Thomas Price tells Alice this, "You know, there used to be rumors about Caroline Carew---I believe she'd be your great-grandmother---keeping some sort of intelligent rodent as a pet." That would make Caroline the mother of either Alexander or Enid Healy. This is a little puzzling, since Caroline is identified as Caroline Healy in Goshman's tree above. Assuming that is accurate and that it's the same Caroline, it is hard to avoid the conclusion that Alexander and Enid's marriage was consanguineous. (Note that Enid is said to have "Carew origins" in "Target Practice".) That Ain't Witchcraft makes clear that the Well-Groomed Priestess is indeed Enid's mother Caroline Carew.

In Half-Off Ragnorok, Alex writes this: "Aeslin mice have their own unique approach to the language. I was the God of Scales and Silence—largely, I think, because I liked snakes and didn’t talk as much as my sisters—and Grandma and Sarah were the Heartless Ones." Grandma in this case is Angela Baker. Angela Baker and Sarah Zellaby are Johrlac/Cuckoos (related to the Price family by adoption), thus, as pointed out a few lines later, the designation "Heartless" is anatomically accurate.

At one point in Pocket Apocalypse the mice greet Alex with "HAIL THE GOD OF SCALES AND SILENCES, CONQUEROR OF WEREWOLVES!". He resolves internally to fight having "Conqueror of Werewolves" added to his titles.

In the Patreon story "The Recitation of the Most Holy and Harrowing Pilgrimage of Mindy and Also Mork", while they are searching an airport for the departures board, Mindy says to Mork, "Seek things whose Function seems to be the spreading of information, and meet me here in the time it takes to recite the first Catechism of the Kindly Priestess." The backstory suggests that the only rites Mindy and Mork have in common are those that date back to times before Alexander and Enid Healy left the Covenant. Thus it is likely that the Kindly Priestess is an ancestor of Alex or Enid.

Antimony writes the following in Tricks for Free: "I was the first member of our family to be without a piece of our institutional memory since Elizabeth Matheson had discovered a colony of Aeslin mice worshipping a chicken in her yard." So apparently it all started with Elizabeth Matheson, whoever she is.

In That Ain't Witchcraft Antimony recites an Aeslin Catechism that clarifies the early lineage.

In the days when the faith in the Feathered Lords was waning, came Elizabeth Evans, called Beth, the Kindly Priestess, who did find Us gathered in her yard, and say, Why, Look At You, You Must be Starving. And she did gather Us in her apron and carry Us into her Home, which would be our Home thereafter, and say, You Are Safe Here, If You Will Follow the Rules I Set—

Her child, Caroline, the Well-Groomed Priestess, did come to us with open hands, and say, My Mother Is Old, and The Covenant Does Not Understand; Come With Me, For Any Husband I Will Have Will Have You Also. She did marry Peter Carew, the God of Hard Work and Sunshine, and they did raise four children in hope and in glory, hidden from the Eye of the Covenant by the strength of their affections—

Her eldest daughter, Agnes, refused us, but did not break her mother’s Confidence, saying, You Ask Too Much of Me. But her second daughter, Enid, the Patient Priestess, did say, Mother, I Love You, and I Love the Mice, and I Will Keep Them Safe. She did marry Alexander Healy, the God of Uncommon Sense, and on their wedding night—

Combining this with the information from Tricks for Free, we have:

Obviously Beth Matheson and Beth Evans are the same person. Probably one of those is her maiden name and the other her married name, but we don't know which, and thus we don't know Caroline Carew's maiden name.

In Imaginary Numbers we learn that Beth, The Kindly Priestess, is responsible for the nomenclature in which Price family men are Gods, while women are Priestesses, "She had refused to be recognized as a god, saying that it was improper for a woman to set herself above her husband, and so generations of labels had been indelibly set."

In the novella Follow the Lady (included with Imaginary Numbers) we have the following dialog:

“James here is my brother now,” I said. “His old family didn’t take proper care of him or appreciate him enough, so I stole him.”

“HAIL TO THE COMING OF THE STOLEN GOD!” shouted the mice in unison.

Antimony is speaking in the first line, and then we have the response of two Aeslin mice attached to Grandma Alice's temples. James is James Smith, an ice sorcerer whom Antimony took in in That Ain't Witchcraft.

In Calculated Risks, one of Antimony's Aeslin speaks as follows. Sarah is telling the story. Her comment on Artie's interruption clarifies who the Priestess and God are:

for is it not said by the Silent Priestess, Dammit, Arthur, I Love You, But You’re Thick As A Plank Where That Girl Is Concerned, and also, Just Tell Her How You Feel Already, She’s Psychic But She’s Not Rude, She’ll Never Figure It Out On Her Own. And then did the God of Careful Chances not reply—”

“Um, I think we’re done here,” said Artie, before the mouse could explain exactly what Uncle Ted said in reply to Aunt Jane.

“And then did the God of Chosen Isolation state with Firmness that as Abelard the Artificer could not continue his good and necessary work without the aid of Ashfire the Cleric, the Campaign must be Suspended,” squeaked a tiny voice from Annie’s hair.

From the context, Annie's mouse is telling of a D&D campaign that Artie broke off because of Sarah's absence. Thus,

This one is also in Goshman's tree above.

In the Patreon Story Halfway Through the Wood (which is actually a short novel), we have the following dialog between Mary and Thomas:

Mary: “I think he is, secretly, but he [Jonathan] doesn’t want to fight with his father and the mice, who have formally deified you.”

Thomas: “Have they, now? And what is my godly title to be?”

Mary: “They have declared you the God of Inconvenient Timing, which is pretty apt, if you ask me.”

Yet another title for Thomas!

Also in Halfway Through the Forest, Thomas says this to Alexander, speaking of Alice:

I think she’s the granddaughter of Enid Healy, born Enid Carew, and the great-granddaughter on the same side of Annabelle MacLaine, who was herself the daughter of Muriel Chaseman.

Since we know that Enid's mother was Caroline Carew, Annabelle MacLaine and Muriel Chaseman must be Alexander's mother and grandmother. Alexander's ancestors have probably not been deified by the Aeslin.

Not the answer you're looking for? Browse other questions tagged seanan-mcguire incryptid or ask your own question.

5
Shakespeare making fun of Shakespeare: listing all of the self-deprecating meta-references in Shakespeare's plays