As I am planning to post this poem on my blog relatively soon, I was doing some research on the first line. From what I had written previously, I seem to have found two different versions:

I opted for the first one for my translations, because καίπερ only stresses the concessive (is that the word?) nature of the participle, and I preferred to have a vocative there like παῖδες, and also because instead of a seemingly useless prefix I preferred an object for the verb ἐννέπω. Tonight I was trying to get more info on the sources. I looked into bibliotheca Augustana, and the ἐπιγράμματα link does not exist. I looked at Edmonds (who proposes another version, παῖς ἔτ', which I prefer to the one I opted for back in the days, and has τόρ' instead of the object, an adjective referred to the speaker meaning "clear, distinct", perhaps I will adopt this reading), and he says Anth. Pal. 6 269. Sadly, I found no scans of that. I looked at Campbell hoping for a more detailed critical note, and the poem isn't there! Wharton agrees with me, The Complete Poems of Sappho follows Cox (or so he says), and ends up agreeing with my choice -- almost, he has τότ' instead of τόδ', perhaps a typo, as "then" doesn't seem to fit in there. I'm starting to wonder where I got the other choices. Well, the καίπερ might have been off the weird safopoemas.doc (pdf version here), for which cfr. my post on the completion of Sappho 94. But the other thing? Even the Greek Wikisource completely agrees with me on this! Googling Σαϋναϊάδα yields this with ποτεννέπω. I don't remember this source, but perhaps that was it.

Anyways, I was wondering what the experts think about this line and its most likely "correct" reading, what the sources for this poem have to say, and why Campbell doesn't include it. Is it perhaps of disputed authorship, along with the other two epigrams in elegiac couplets?

Reference to Greek Wikisource with texts of epigrams

Two of these (the present one is Απόσπασμα 118, the other one 119) can be found here. The third one, to the fisher Pelagon (τῷ γρίπει Πελάγωνι πάτηρ ἐπέθηκε Μένισκος / Κύρτον καὶ κώπαν, μνᾶμα κακοζοΐας), has strangely been removed even from there. Somebody here probably doesn't have a clear idea what an epigram is :). Anyway here is someone following Edmonds on the poem of the question and including all 3 epigrams.

and he has this critical note: 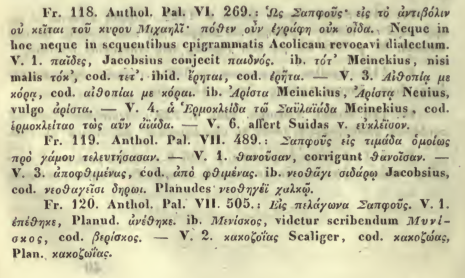 Whoopsies! I missed them in Campbell because they were in smaller font. p. 113. Et voilà: good morning ποτεννέπω, though Campbell agrees on the vocative. Here is a screenshot of all the epigrams in Campbell: 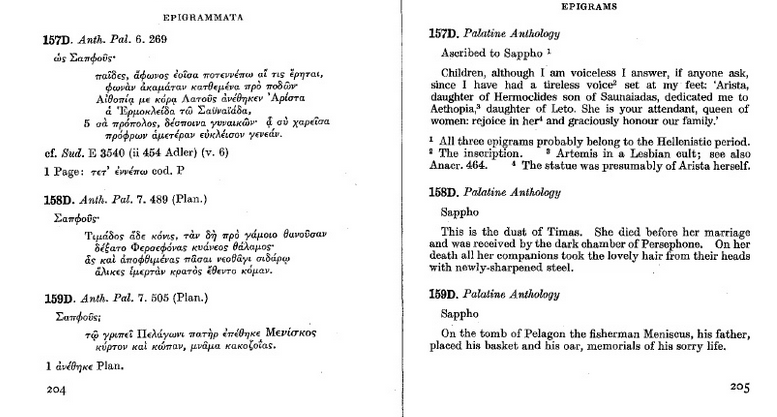 Browse other questions tagged poetry greek-literature sappho or ask your own question.

12
Who put forward this completion to Sappho 94, and what is it actually supposed to read?

19
Are there recorded instances of asexuality in the body of ancient Greek writings?
7
Why did the Seed-Merchant thank God?
14
About l. 3 of the second stanza of Sappho's Ὠδὴ εἰς Ἀνακτωρίαν (Ode to Anactoria)
12
Who put forward this completion to Sappho 94, and what is it actually supposed to read?
10
About Sappho's "Hector and Andromacha" poem
6
Scanning the line "And every spirit upon earth" in Thomas Hardy's "The Darkling Thrush"
3
Repetition of "smile" in Kamala Surayya's 'My Mother at Sixty-six'
2
Who is Mrs Icarus in Carol Ann Duffy's poem?