A long time ago, I translated all of Sappho's poems. In doing so, I had to reconstruct some parts of the texts, and do some amateur level criticism. One example of such work lies in the poem sometimes referred to as in the question title, whose first line goes φαίνεταί μοι κῆνος ἴσος θέοισιν (That [man] seems to me equal to the gods). The second stanza goes:

Or rather, this is the version I like best. The other version has line 3 read:

(and l. 4 with εἴκει). Now the reasons I prefer the reading given first are two:

Trouble is, the only source I found with this reading is Wharton, which has no critical apparatus or commentary, whereas everywhere else I see the second reading (e.g. Bibliotheca Augustana, The complete poems of Sappho, Edmonds and Campbell). So I was wondering: why did Wharton put this version forward, and what is experts' opinion about how likely this is to have been the original version?

Cox's edition of Sappho was formerly on the English Wikisource, and is another edition with εὔιδον, and also seems to have no critical apparatus and no comments on this reading.

This edition of Longinus On the sublime reports the text as: 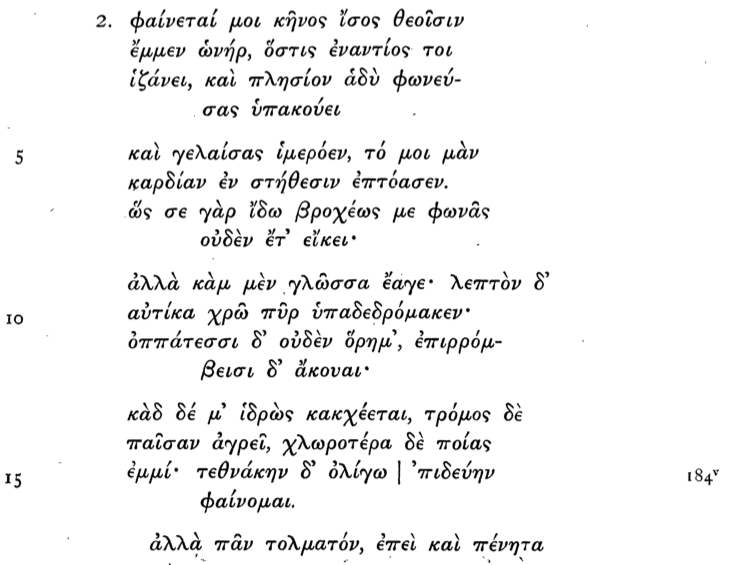 that is with ἔς σ' ἴδω, and adds this critical note:

It is Longinus's work following a Paris manuscript.

I have recently opened a blog where, among other things, I will post, very very slowly, all of my work on Sappho. For now, the only Sappho I've posted is precisely this poem, alongside Catullus's version. Any views and/or comments are welcome!

To begin with, we must remember that the famous Sappho 31 is preserved only in (Pseudo-)Longinus's On the Sublime, a first century work whose authorship is disputed.

Wharton, in his preface, says:

I have not concerned myself much with textual criticism, for I do not arrogate any power of discernment greater than that possessed by a scholar like Bergk. Where he is satisfied, I am content. (pg. xi)

It is certainly incongruous, then, that Bergk's Poetae Lyrici Graeci (pg. 600-601) does not agree with this reading in its proposed text. (Note, however, some counter-examples below.) In fact, it does not even honor this reading with a mention in its apparatus criticus:

He mentions two other readings for this line:

So where does the "εὔιδον" reading come from? I found that it is cited in Merrill's Commentary to Catullus 51 (Harvard University Press, 1893).

Strangely enough, the Slovak Wikipedia article on Sappho also gives the "εὔιδον" reading, citing Bergk's Teubner edition. In addition, Bernardakis' commentary to Plutarch's Amatorius cites the same reading from Bergk, though I cannot find it. It is possible that Bergk emended the text between editions, but I am not in a position to verify that.

Roberts, in the 1907 Cambridge University of Press edition of Longinus' De Sublimitate, follows the text of Bergk almost exactly:

The Loeb edition (1995), reviewed by Russell, is very close to this as well:

Obviously, the "<ἐς>" suggests the editor's suggested addition. I unfortunately don't have access to the latest Teubner edition, but the overwhelming consensus seems to be in favor of the reading without εὔιδον. Given the many divergent readings of this line, it is likely that it was bungled very early in its manuscript tradition: it was, after all, a relatively obscure work.

Not the answer you're looking for? Browse other questions tagged poetry greek-literature philology sappho or ask your own question.

9
Why is “Ode on Melancholy” an Ode?
12
Who put forward this completion to Sappho 94, and what is it actually supposed to read?
10
About Sappho's “Hector and Andromacha” poem
3
What's the significance of the stanza about V for victory in Tony Harrison's V?
3
Difference between “Ode to” and “Ode on”?