Did young Dream and Death really look like this?

In "The Parliament of Rooks" (The Sandman #40), Abel tells a toddler Daniel Hall a "children's story" about how he and Cain came to live in the Dreaming (pages 18-20). In the story, Dream and his sister Death appear similarly to Pop Vinyl characters, and it's really quite adorable. 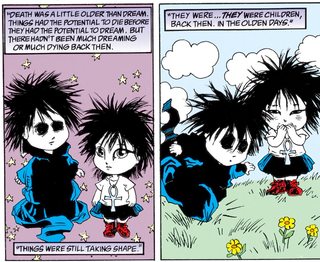 Cain objects to this portrayal of the eldest Endless, but Abel's rebuttal is a little unclear to me: 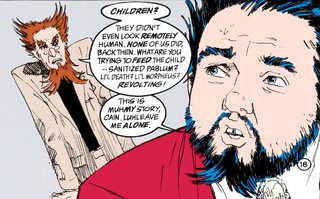 So I wonder about the veracity of Abel's portrayal of the Endless. Cain thinks this is a gross oversimplification, but Abel says "this is my story." I think there are three possibilities:

Which of these three is it? Was Morpheus actually "Li'l Morpheus" for a time? (Is there another possibility I haven't considered?)

1: I don't think it's likely that he doesn't understand that his fraternal relationship is severely abusive and dysfunctional, although I admit the possibility. I submit that he doesn't intend the living "happily ever after" as part of his story, making it more of a hinted plea to his brother, because the point of view shifts from "way back when" back to the present time, when Abel is speaking to Daniel. On the other hand, he doesn't stutter during that part; Matthew notes on the next page that the stutter disappears when Abel tells stories, making it possible that that sentence is part of the story. I'm not really sure how to interpret that part.

Cain is most probably right in blaming Abel for "sanitising".

When was "that time"?

When The Dreaming was first established, Dream was its only inhabitant for millions of years - at least according to Neil Gaiman:

I always assumed the Sandman spent millions of years in a version of The Dreaming completely on his own; and I think he quite enjoys the alternative of having others around - though he'd never admit it.
The Sandman Companion, chapter 4: "The Doll's House", page 52.

Note that the author says "millions", and not billions. Assuming all the Endless were born very promptly after the "beginning" of the universe, I think it's quite obvious that Cain is right - after all, Earth is only 4.5 billion years old, and the universe is 3 times older.

Adam, Eve, Cain, and Abel are not necessarily human.

When Matthew asks how Eve, Cain, and Abel fit into the scientific view on the history of the world, Abel begins to respond that the story he told was not set on Earth. 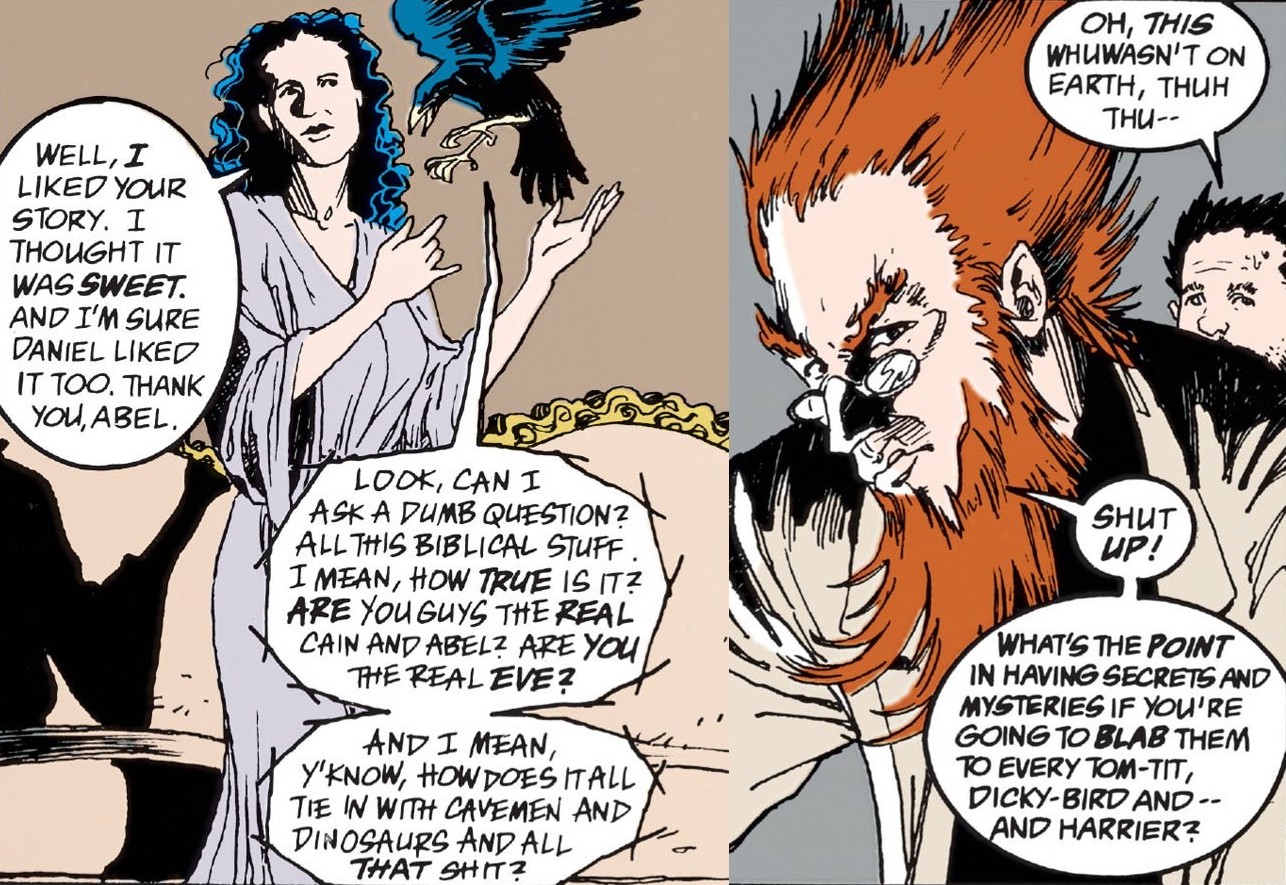 My assumption is that the story of Adam and his wives was not meant as a history of human beings as well - Cain does say "you're everybody's mother", and even though Eve says "it's a matter of opinion", which part of this comic series isn't?

Dreamers, in The Sandman universe, are not only humans... and not even "living beings" in the accepted sense of the word.

Take this panel from The Sandman: Overture #2 - this is what Dream looked like for the first dreamers: 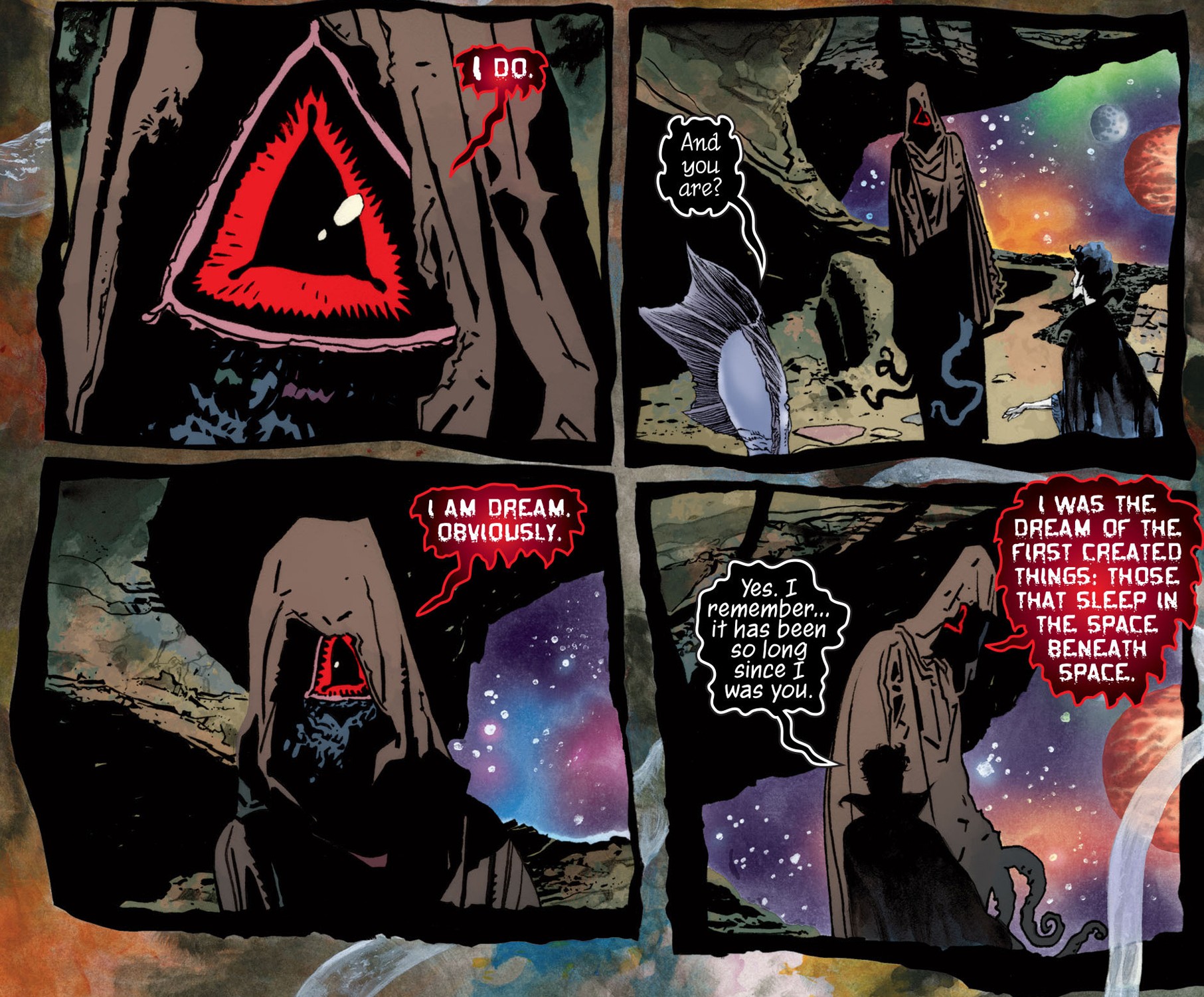 I think it's somewhat humanly-arrogant to assume those characters looked like humans a long time ago. After all, in a series whose protagonist changes appearance as he pleases, things like this shouldn't come as a surprise.

The reason why Abel "sanitised" his story is his audience - a former human now-raven Matthew, and the human boy Daniel (nobody cares about the gargoyle). Quite possibly they wouldn't understand his story if he told it as it was.

9
What does Dream's ruby represent?

46
Does Dr. Manhattan have free will?
8
In “The Sandman”, what are nightmares for?
13
Why does Morpheus look like Neil Gaiman?
8
Are man and woman like ash and elm? How?
4
Is the heart in “The Hunt” associated with Desire?
39
Did Gaiman and Pratchett troll an interviewer who thought they were religious fanatics?